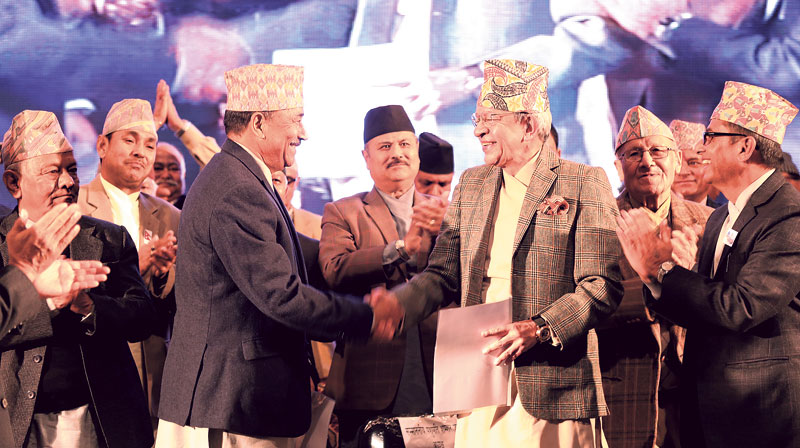 Kamal Thapa and Pashupati Shumshere JB Rana shake hands after the unification between their two parties at Nepal Academy at Kamaladi in Kathmandu on Monday. (Dipesh Shrestha/ Republica)

The unification process between the two parties had received a jolt in August when RPP decided to join the Pushpa Kamal Dahal-led government and RPP-N decided to remain in the opposition.

In the following two months, the two parties started fresh initiatives for unification and they reached a final deal last week. The unified party will carry the name of RPP and the flag of RPP-N.

Following the unification, RPP will be an influential fourth largest party with 36 seats in Parliament.

"Following the unification, all the parliamentarians elected from RPP-N will sit in the ruling benches from tomorrow. We are no longer in the opposition. Our unification will further strengthen the present coalition," said Mohan Shrestha, central committee member of the unified party and former deputy spokesperson of RPP-N.

If the numbers alone are considered, the ruling coalition has the probability of garnering the two-third majority in Parliament required for a constitutional amendment as only the main opposition CPN (UML), the CPN (ML), Nepal Workers Peasants Party and Rastriya Janamorcha are clearly against amendment.

"The central executive committee and the central committee of the unified party will meet on Tuesday and Wednesday to make clear its stance on the issue of constitutional amendment. However, it is clear that we'll remain flexible over amendment matters," said Shrestha.

Hinting at the present political deadlock while speaking at the party unification function in Kathmandu, Monday, party executive chairman Thapa said that constitution implementation will not move forward unless the issues related to Madhes are resolved.

"If the issues of Madhes are not addressed on time, constitution implementation could hit a jolt. We should be flexible and rise above party interests," said Thapa.

The unification could to some extent rekindle the agenda of reinstating Nepal as a Hindu state  but it depends on how the unified party puts forth the agenda in the course of the amendment.

RPP-N and RPP: A Strange unification

Govt, ASDP and NACCFL sign deal for capacity buildings of cooperatives in Karnali
13 minutes ago