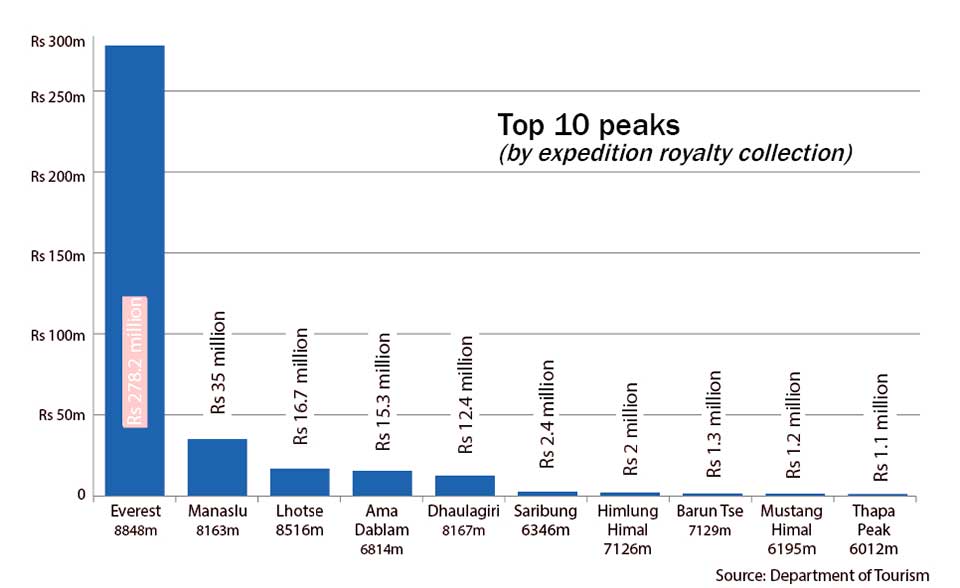 KATHMANDU, Jan 8: The government collected Rs 389.5 million in royalties from mountaineering expeditions in 2017, a growth of 27.61 percent compared to the earnings of 2016.

Data compiled by the Department of Tourism (DoT) under the Ministry of Culture, Tourism and Civil Aviation (MoCTCA) shows that the department had mobilized revenue of Rs 281.9 million from mountaineering expeditions in 2016.

The rise in royalty collection from mountaineering expeditions shows that the country’s tourism industry is indeed bouncing back on track after the devastating earthquakes of 2015.

According to the department, 2,171 climbers from different parts of the world made successful summit of various mountain peaks in Nepal in 2017, compared to 1,892 in 2016.

Responding to a query on how the royalty collected from these mountains is repatriated to the affected areas, Humnath Pandey, a section officer at the Mountaineering Section of DoT, said that the department does not have any role in royalty sharing and repatriation.

“The government takes the decision on the basis of Mountaineering Expedition Regulation 2002 AD,” Pandey said, adding: “The department only collects the royalty and deposit it in the government treasury.”

Figures compiled by the department, however, excludes royalty collected by Nepal Mountaineering Association (NMA) from 27 small peaks. The government has opened 414 peaks for mountaineering. Of them, 92 peaks are yet to be climbed.

Everest the most-climbed peak in 2017
KATHMANDU, Jan 8: Mount Everest, known locally as Sagarmatha, was the most-climbed mountain in Nepal in 2017, according to the Department of Tourism (DoT).  Data compiled by the department shows that 377 climbers stood on the summit of the highest peak on earth in 2016, compared to 291 in 2016. Ama Dablam came second with 328 successful summits, followed by Manaslu (257), Saribung (175) and Lhotse (120). Likewise, Mustang Himal, Thapa Peak, Himlung Himal, Dhaulagiri and Barun Tse were in the fifth to 10th position with 118, 79, 75, 73 and 51 successful summits, respectively.

KATHMANDU, Jan 12: The government has collected Rs 1.68 million as royalty as of Saturday from mountaineers for winter expeditions to... Read More...

University degrees in mountaineering to be offered soon

In a new twist, EC trashes demand of NCP rival factions to recognize them as official NCP
1 hour ago