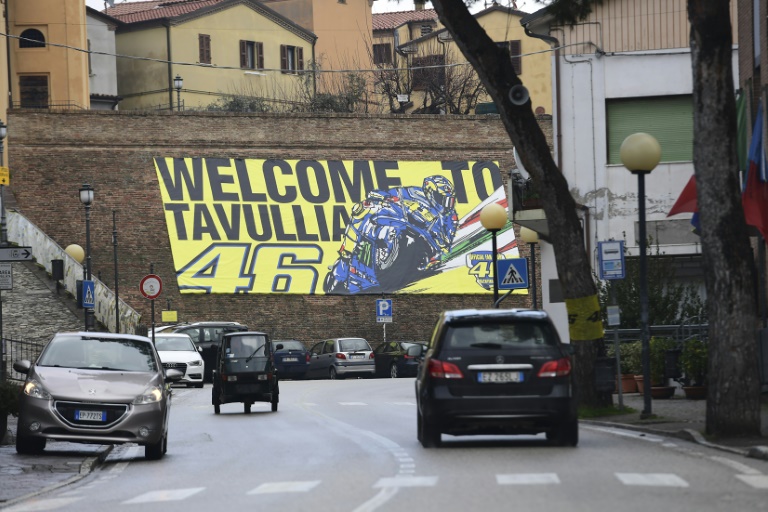 TAVULLIA, March 6: Tavullia, once just a sleepy town in the rolling hills along the Adriatic coast, has become a motorcycling Mecca for fans of Italy's inimitable nine-time world champion Valentino Rossi.

Up the paved slopes and through the arcades towards the centre of the town hang signs saying "Welcome to Tavullia 46" in reference to Rossi's hometown and the lucky number he wears.

The multiple grand prix champion is acclaimed as one of the greatest riders of all time. But as a teenager he was the terror of Tavullia -- a menace to the local population of around 7,000 and scourge of the local police as he and his pals barrelled their mopeds around the quaint streets.

But today lampposts along the same streets are emblazoned with flags reading 'The Doctor 46' (his nickname and number) and a plethora of cottage industries have blossomed celebrating his career.

Even at 40 as he prepares for the start of a new season at Qatar's MotoGP on Sunday, there are few active sportsmen or women in motor racing-mad Italy who can rival Rossi's messianic popularity, and caps, t-shirts and paraphernalia are on show everywhere you turn in Tavullia.

'VR46', Rossi's sports marketing business, is also head-quartered here and employs over 40 full time staff from around Tavullia just on the merchandising side, which now also sports a full size dirt-floor motorcycle racetrack.

The company's CEO Alberto Tebaldi told AFP Rossi had charged him with the highest standards.

"We started back in 2009 when Val decided to build this sporting structure. He wanted something top quality for the merchandising and he wanted it done here," he said.

On top of all the shirts, stickers and caps is the motorcycling academy for young riders where his team, Team Sky, train for Moto2 and Moto3 (125cc and 250cc).

"Back then there were just six of us and now there are over 40 in the merchandising, 35 at Team Sky and more at the academy and the Motor Ranch.

"At the last Christmas party there were over 90 of us," Tebaldi said.

A childhood friend of Rossi, Alessio Salucci, is the champion's right-hand man and never dreamed of being at the head of a business with a 30-million euros annual turnover.

AFP / Miguel MEDINA'VR46', Valentino Rossi's sports marketing business, is also head-quartered in his hometown of Tavullia and employs over 40 full time staff just on the merchandising side

"There were four or five of us who would hang out together on this corner and while all the other boys wanted to play football we were much more interested in motorcycling, of which there was a tradition here," he explains.

Rossi's staggering career win rate and his huge personality have built on that tradition, with tens of thousands of fans flocking to frequent events at the village.

"Before Valentino became Valentino, it was quiet here. Without him the place would have been poorer and less attractive," Salucci says.

"Today Tavullia is known all over the world. That has allowed us to create business, sports installations, a football school, all kinds of things that are in a way Valentino's creation. If this region is how it is today it's thanks partly to the money Valentino has attracted."

In the village cafe the barman has no doubts about the matter: "Without Rossi, Tavullia would be a one-horse town."

A visitor could easily be left with the impression that Tavullia is no more than Valentino Rossi's biker theme park. The pizza place is called Da Rossi, a gift shop is named VR46, even the food store had products marked with his name.

"Valentino is proud to bring life to his region, all the people who work here come from Tavullia, Rimini and Pesaro (nearby coastal resorts). It's fabulous to see the local reality of a global phenomenon," Salucci says.

Two killed in house collapse in Doti
9 minutes ago

Ruby Khan and govt strike deal, probe panel to be formed
19 minutes ago