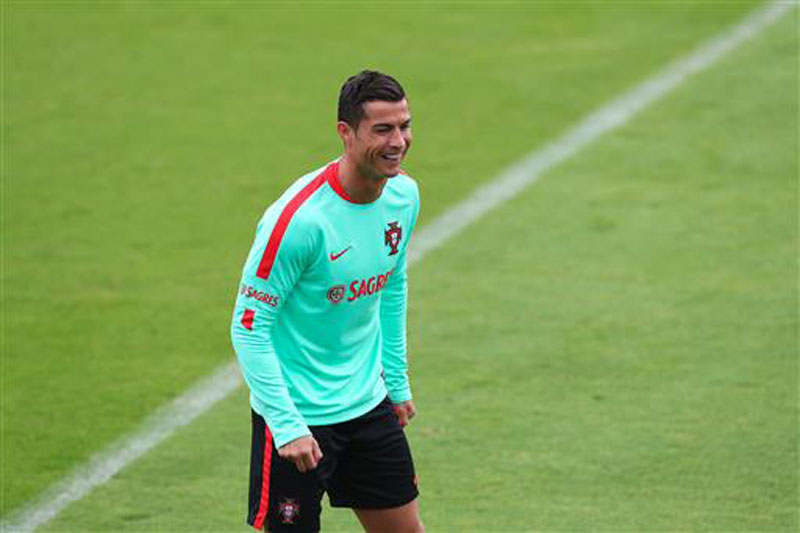 LYON, July 4: When Portugal and Wales face off for a spot in the final of the European Championship, two players will be expected to rise far above the rest.

Cristiano Ronaldo and Gareth Bale, club teammates at Real Madrid and the most expensive players in the history of the sport, will bear the hopes of their nations on Wednesday night at Stade de Lyon.

None of the previous 48 matches played at Euro 2016 has pitted two players of such unequaled star status and undisputed importance to their teams.

The stage, fittingly enough, could hardly be bigger. The winner will earn a spot in the July 10 final at Saint-Denis against either world champion Germany or tournament host France.

"Two of the best players on the planet," Wales coach Chris Coleman said. "I don't suppose there will be any love lost on the evening. We know what's at stake, any friendship will have to wait until after the game."

Less than six weeks ago, Ronaldo and Bale joined in celebrations after winning a second Champions League trophy in their three seasons together at Real Madrid.

Since moving to Spain on a record €100-million (then $132-million) transfer that broke Madrid's own deal for Ronaldo, Bale has always played the role of deferential sidekick to the three-time world player of the year.

The match in Lyon now offers Bale the perfect stage to challenge that hierarchy. A standout performance by one could even tip the Ballon d'Or vote in his favor.

Bale arrives in better form than Ronaldo. The Wales winger is among the competition's top scorers with three goals (only France's Antoine Griezmann has more with four), including two goals from free kicks.

Bale's unheralded team is also riding a huge high after the most important victory in its history: a 3-1 come-from-behind win to oust Belgium in the quarterfinals.

Best of all for Coleman, his side roared back against the Belgians without needing a goal from Bale. Captain Ashley Williams started the rally that Hal Robson-Kanu and Sam Vokes completed.

It means that Wales has taken the label of underdog fan favorite from Iceland after its fairytale run was ended by France on Sunday.

That was the latest milestone for an ascendant Wales. Ranked outside the top 100 four years ago, Bale scored seven goals in qualifying to carry Wales into its first major competition since the 1958 World Cup. Once in France, it defied expectations by finishing ahead of neighbor England to win its group. It then topped that by becoming the first debutante to reach the semifinals since Sweden in 1992.

And Wales has made its run in style, deploying one of the best attacks at the tournament. With Bale leading the way, it is second only to France with 10 goals scored and joins the hosts as the only teams to have won four matches outright, not counting victories from penalty shootouts.

Portugal, by contrast, has clawed its way into its fourth semifinal in the last five tournaments. Having squeezed into the last 16 after three draws at the group stage, it needed a victory in extra time against Croatia and then penalties to get past Poland.

Across its five matches - and more than eight hours of football - Portugal has been in the lead for a total of only 22 minutes at Euro 2016.

A big part of Portugal's problems has been Ronaldo's performances, which have been below his incredibly high standards.

Ronaldo's two goals against Hungary are his only two strikes in five matches at the tournament. While Bale leads all players with 13 shots on target, Ronaldo has the inglorious statistic of a competition-high 14 shots off the mark.

"If Cristiano Ronaldo doesn't score, it doesn't mean he isn't playing well and doing other things," Portugal coach Fernando Santos said in defense of his forward. "Cristiano Ronaldo is an example as captain of this side. He's doing a great job. He wants to win."

If Ronaldo does score, he will match Michel Platini's record of nine goals at the European Championship.

Portugal will be without suspended holding midfielder William Carvalho. Danilo, who lost his starting job to Carvalho after Portugal drew 1-1 with Iceland in their opener, will likely be back in the lineup.

A potentially much bigger hole for Santos to fill could be at centerback. Pepe didn't train on Monday because of a thigh muscle problem. The Real Madrid defender has been Portugal's best man at the back by far at the competition.

Wales will have to cope with the important absences of midfielder Aaron Ramsey and defender Ben Davies, who both earned one-game suspensions for yellow cards against Belgium.

Andy King, a member of the Leicester squad that won the Premier League last season title against all the odds, could take Ramsey's place.