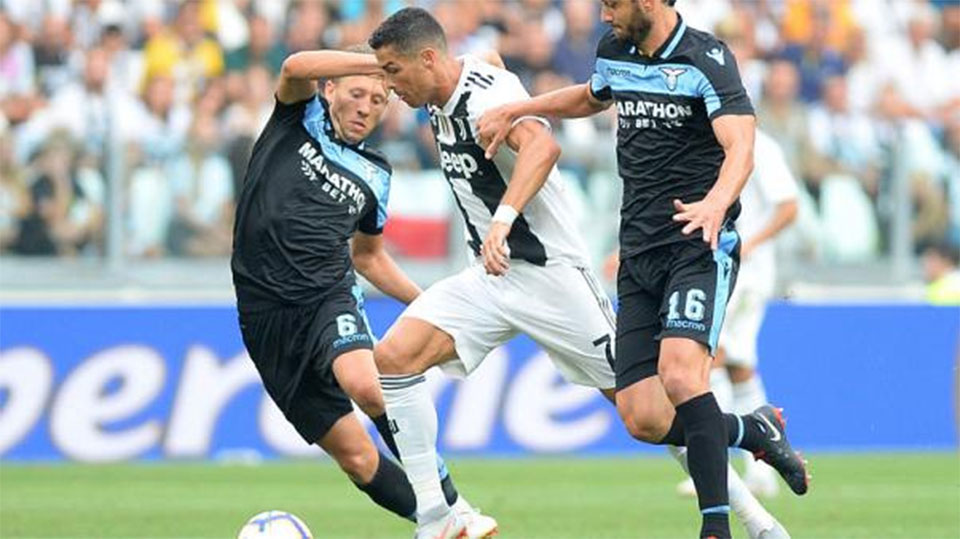 TURIN, Sept 30: Cristiano Ronaldo was involved in all three of his team’s goals as leaders Juventus came from behind to beat 10-man Napoli 3-1 in a Serie A top-of-the-table clash on Saturday to maintain their perfect start to the season.

Dries Mertens gave Napoli an early lead before Ronaldo provided a pinpoint cross for Mario Mandzukic to head in the equaliser and then set up an easy second for the Croat when his shot hit the post.

Ronaldo’s goalbound header also provided the third Juve goal for Leonardo Bonucci after Napoli had left back Mario Rui sent off for a petulant kick at Paulo Dybala.

AS Roma upset the form book with a 3-1 derby win over neighbours Lazio, who had won their last five games in all competitions, while Inter Milan beat Cagliari 2-0 to notch their third league win in a row.

Leaders Juventus, aiming for an eighth title in a row, have 21 points from seven games, six clear of last season’s runners-up Napoli. Sassuolo and Inter have 13 points followed by Lazio in fifth place on 12 and Roma in sixth on 11.

“Ronaldo is enjoying himself,” said Juventus coach Massimiliano Allegri. “He has integrated very well. His precision in the passing moves is exceptional. I think this was his best match of the season.”

Piotr Zielinski fired against the post after six minutes as Napoli made a bright start and they were rewarded four minutes later.

Bonucci’s risky diagonal ball out of defence was intercepted by Allan who quickly found Jose Callejon and the Spaniard laid the ball off for Mertens to tap in.

Juventus needed a piece of Ronaldo brilliance to get back into the game in the 26th minute. The Portuguese twisted and turned past Elseid Hysaj and then dropped a perfect cross onto the head of Mandzukic who powered a downward effort past David Ospina.

Ospina then got down well to stop a Ronaldo free kick and did even better to block the rebound to prevent Juve getting a quick second.

Four minutes after halftime, Ronaldo collected the ball on the edge of the area, fired a shot against the post and Mandzukic followed up to turn the rebound into the net.

Mario Rui was sent off for a second bookable offence after aiming a kick at Dybala and, although it seemed a fair decision, the Napoli players were enraged by the Argentine’s theatrical reaction.

Napoli threatened an equaliser when Callejon got through but his shot was blocked by Wojciech Szczesny and Bonucci wrapped up the game, tapping in Ronaldo’s header at the far post following a corner in the 75th minute.

Ronaldo could have had a goal himself but fired a shot into the side-netting after getting clear of the defence.

“We played well for the first 20 minutes, then our opponents took control of the game,” said Napoli coach Carlo Ancelotti. “We need to continue improving. We will be competitive right until the end.”

Rome overcame their poor start to the season by beating Lazio for the seventh time in their last nine meetings.

Lorenzo Pellegrini back-heeled Roma ahead on the stroke of halftime, shortly after replacing the injured Javier Pastore.

But an awful mistake by Roma defender Federico Fazio allowed Lazio back into the match. The Argentine was dispossessed as he tried to dribble around Ciro Immobile, who ran on to fire the ball wide of Patrick Olsen for his first goal in a Rome derby.

But Roma were back in front within four minutes when Aleksandar Kolarov fired the free kick through a huge hole in the Lazio wall.

Defender Fazio completed the win, and atoned for his earlier mistake, by meeting a free kick with a towering header to score four minutes from time.

Argentine forward Lautaro Gonzalez headed Inter in front after 12 minutes at San Siro, his first goal for the club since his move from Racing Club, and Matteo Politano volleyed the second in the 89th minute.