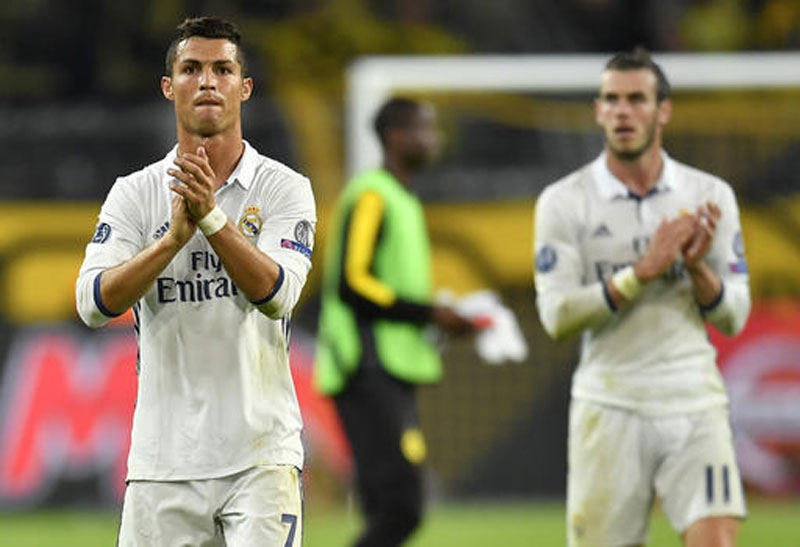 DORTMUND, Sept 28: Borussia Dortmund scored a late equalizer to earn a 2-2 draw against Real Madrid in the Champions League on Tuesday, the latest setback for the 11-time winners.

After two consecutive draws in the Spanish league, Cristiano Ronaldo appeared to have ended the winless run by scoring one goal and helping to set up the other. But substitute Andre Schuerrle struck in the 87th minute to earn Dortmund a point.

"The players played a great match, the result is a difficult one to accept because we deserved a bit more, but it is not a bad result," Real Madrid coach Zinedine Zidane said.

"I think in the first half we suffered a bit because they pressed a lot and we knew it is a difficult place to come against a good team, but I am very proud of the game we played. It was complete in every sense but the shame is it is three games in a row now we have drawn. When you concede three minutes from the end, it hurts, especially given the effort the players put in," Zidane added.

Ronaldo put Madrid ahead in the 17th and provided the cross that led to Raphael Varane's goal in the 68th after Pierre-Emerick Aubameyang had leveled for Dortmund in the 43rd.

Madrid and Dortmund have four points each from two matches in Group F, while Ronaldo has now scored 95 goals in the Champions League and 98 in all UEFA competitions.

The Portugal star opened the scoring after a brilliant move. Luka Modric found Karim Benzema on the left, the France striker sent a long ball to the other side and Ronaldo let it run through to Gareth Bale. Bale moved forward, and then backheeled the ball to Ronaldo, who slotted inside the far post.

Dortmund's first equalizer came after Raphael Guerreiro's free kick from 25 meters (yards) was punched out by Keylor Navas. The ball hit Varane and bounced toward the net, with Aubameyang pouncing to score from close range.

Navas, coming back from three months out after heel surgery, looked unlucky to concede the goal but made a string of fine saves.

"In the first goal I made a mistake. It took me a bit by surprise, I took the wrong decision and it cost us a goal," Navas said. "We will work on those details so it doesn't happen again. I felt calm during the whole game despite the long months I've been out."

Madrid restored its lead when Ronaldo crossed from the left, and Benzema connected but hit the crossbar. Varane had a simple tap-in as the ball landed in front of the defender.

Dortmund had won its previous three matches at home to Madrid.

The match was played at pulsating pace, with both teams attacking strongly. Aubameyang hit the crossbar in the first half and Ousmane Dembele had several efforts go high.

"We played a very good first half, but made a mistake and conceded the goal," Dortmund coach Thomas Tuchel said. "But we reacted well and dominated in the first half."

"In the second, we made too many mistakes in midfield, lost the ball easily. In the end, I think the result is fair, you take what you can get. We have a lot to learn from this game. It's tough to come back twice against such a team," he said.

Schuerrle's goal came as Real Madrid seemed to be cruising home. Aubameyang attempted an overhead kick, the ball bounced off Danilo and into the path of Schuerrle, who fired with his left foot into the roof of the net.

"If you come back twice against Real Madrid, that's a nice feeling. That will help the team to grow together," Schuerrle said.

Portugal's Cristiano Ronaldo celebrated his Madeira homecoming with an early strike but Sweden wrecked the party by hitting back from... Read More...