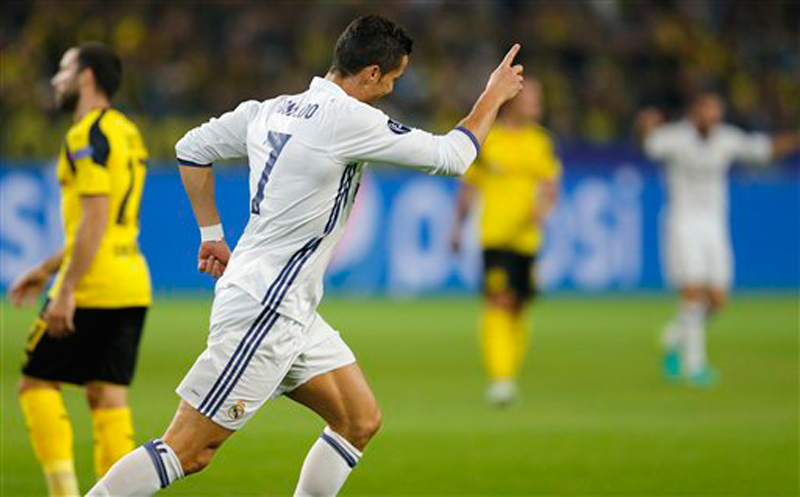 MADRID, Sept 28: Real Madrid solved one of its problems during its trip to Germany in the Champions League: Cristiano Ronaldo made peace with coach Zinedine Zidane.

Now it needs to find a way to start winning again.

The 2-2 draw at Borussia Dortmund on Tuesday was the third consecutive for Madrid in all competitions, raising questions about the team's potential to repeat as Champions League champion, and to end a four-year title drought in the Spanish league.

"I am frustrated," Zidane said. "We played a good game in attack and defense and it was a great effort from everyone. We played the game we wanted. At the end, the same (draw) again, it's the third match. I'm frustrated for the players because it's undeserved."

Dortmund's equalizer came in the 87th minute, when Madrid appeared in control.

One of the positives that came out of the result was that Zidane got a much warmer handshake from Ronaldo, who created a bit of turmoil after going on a little rant because of his substitution in the league setback at Las Palmas on Saturday. He didn't even look at Zidane while reaching for the coach's extended hand on the sidelines.

After scoring Madrid's first goal in Dortmund, he immediately pointed to the bench and rushed to celebrate with his teammates. He also exchanged a moment with Zidane, apparently trying to erase doubts about any problems in their relationship.

Ronaldo and his teammates have been struggling to put together the type of top-notch performances that led them to the European final last season, failing to capitalize on scoring opportunities and being unable to put games away.

"We need one more goal. When you are only one goal in front, things like this can happen," Zidane said. "We are in a slump but we will keep working, and we will change things soon."

Madrid's first draw was at home against Villarreal, and then it tied Las Palmas after conceding a late goal. In its Champions League opener against Sporting Lisbon, it was losing until the 89th when it rallied to win.

Madrid remains unbeaten, and is in decent shape both in the Champions League and La Liga, but new setbacks could start putting Zidane's team in a difficult position in both competitions. Madrid is tied with Dortmund atop Group F with four points from two matches. It leads the league after six games, one point ahead of Barcelona.

Madrid's next chance to snap its winless streak is on Sunday in La Liga against Eibar at Santiago Bernabeu Stadium.

"Even though we've drawn the last two games in the league, we don't want to keep playing badly," Madrid midfielder James Rodrigues said. "On Sunday, we have to go out looking for a win."

All three draws came against teams with yellow uniforms. Eibar's colors are blue and purple.