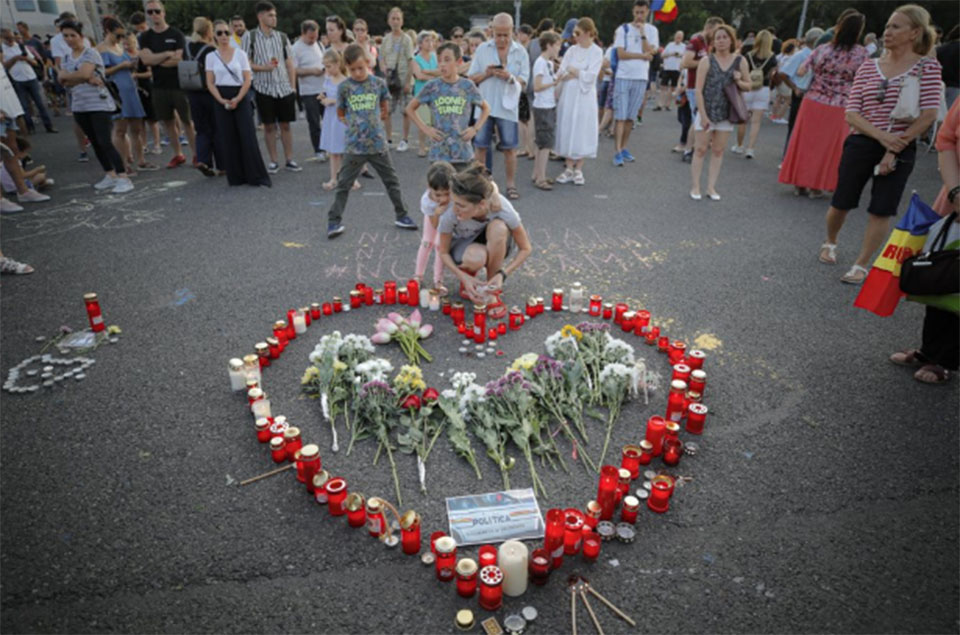 People light candles outside the government headquarters in memory of a 15 year-old girl, raped an killed in southern Romania, after police took 19 hours from the moment she called the country's emergency hotline to intervene, in Bucharest, Romania, Saturday, July 27, 2019. Thousands of people took part Saturday evening in Bucharest in a march protesting the handling of the case, blaming Romanian officials for negligence, incompetence and a lack of empathy. (AP Photo/Vadim Ghirda)

BUCHAREST, July 28: Romania’s prime minister said Saturday she is considering a referendum on harsher penalties for crimes like murder, rape and pedophilia in the wake of the rape and killing of a 15-year-old girl that has shocked the country.

Prime Minister Viorica Dancila also called for efforts to reduce the authorities’ reaction time in similar cases, after police were criticized for reacting too slowly to the girl’s repeated phone calls for help to the country’s emergency hotline. Romania’s national police chief was fired Friday over the handling of the case.

Thousands of people took part Saturday evening in a march protesting the handling of the case, blaming Romanian officials for negligence, incompetence and a lack of empathy.

Chanting anti-government slogans and carrying Romanian flags, the protesters marched from Victoria Palace, the government headquarters, to Revolution Square, where they lit candles outside the Interior Ministry. Some chanted “Resignation,” ″Corruption kills” and “Down with the government” during the march, while also taunting police officers with shouts of “Hide, your hands are stained with blood!”

Authorities say the man suspected in the case, Gheorghe Dinca, has been detained on suspicion of trafficking minors and rape. A court is expected to place him under preliminary arrest for up to 30 days.

The girl, whose identity has yet to be officially confirmed, was raped and killed in the southern city of Caracal.

It reportedly took police 19 hours until they began to search the suspect’s home after the victim’s calls saying she had been beaten and raped by a man who picked her up in his car as she was hitchhiking to Caracal from a nearby village.

Pakistan was rocked by violent protests when the body of a six-year-old girl, Zainab, was recovered on Tuesday from a... Read More...