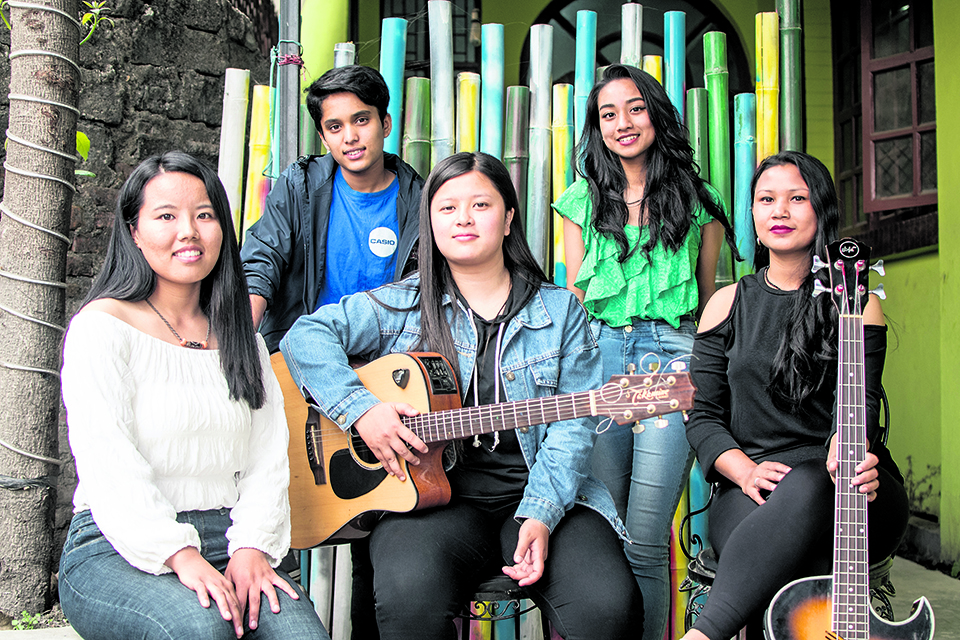 Eshika BK used to attend the church and she noticed that the choir at the Sunday Meetings consisted entirely of boys. She wondered why that was the case and decided that she would change this. So she came home everyday and learned to play the guitar with some help from her brother. At school there were no girls playing any kind of musical instrument, so her music teacher insisted that she learn to play. At church too she was incited to play (by virtue of being the only instrument playing female). Music has been a part of her life ever since then.

In grade eight, Renu Syangbo was inspired by a remark her brothers made about the lack of female musicians in Nepal. It was a pity, they believed, and Renu agreed. So she asked them to teach her a few chords and practiced for hours on her own. Nearly 14 years later Renu is a bassist for one of Nepal’s only female rock bands. Having grappled with metal, rock, jazz, Renu has quite the musical spectrum. But being a band member is yet another musical experience for her.

Gorkhali Girls Band is one of Nepal’s only all female bands. And a rock band at that further adds to the rarity. The band has been around since 2012 but it has had frequent lineup changes since then. Managed by Sunil Lama, the present band members include Renu Syangbo (bass guitarist), Eshika BK (guitarist), Sushma Ghalal (guitarist), Mrinal Manandhar (vocalist), Yaju Acharya (flutist), and Sangdoma Sherpa (drummer).

The band started out at a school event in 2012. Sushma and her group of friends were performing for an event and when asked for a group name, Sushma announced, in the spur of the moment, “Gorkhali Girls Band” and the name then stuck with them. Although a rock band, Gorkhali Girls Band is all about keeping the essence of Nepali life and music intact. Of the original lineup, only Sushma and Sangdoma remain and the other members joined in a little over a year ago with vocalist Mrinal joining just a couple of months ago.

For Mrinal, her earliest memories are of her singing. “People tell me that I started singing as soon as I learnt how to. My family is quite musical so music was everywhere growing up. Later I started posting my own covers on YouTube and was approached by the band to join in. Although I personally lean towards R&B and Soul, the idea of a female rock band really appealed to me,” she says.
Sushma and Sangdoma too, very much like Eshika and Renu, started their musical journey because there was practically not a single female musician they could look up to. So they decided that they would become one themselves. They gradually learnt to love rock music and began appreciating the rawness of the genre and agreed that if they were to present sincere, well-meaning messages, rock was the way to go.

Despite the current members originally having their own musical preferences, rock is what brings them together. The group meets three to four times a week for practices and to discuss their song arrangements. “These practices are fun. We’re all people with different musical backgrounds but we are bound by our love for music and we are proud of what we represent,” says Renu.

Recently the group performed at the “Women In Concert”, an initiative of Abhaya Subba, front woman of the rock band Abhaya & the Steam Injuns, to promote gender equality and give women musicians a bigger platform. As one of the performers, the band members were delighted to be a part of the lineup and were pleasantly surprised by the explosive response from the crowd. “As a female band, we are used to the scrutiny we are placed under and to be so appreciated by a crowd was really an experience,” adds Renu.

Eshika, on the other hand, feels that as a band comprising of only girls they are viewed much more critically. If they make mistakes on stage (which is unavoidable as performers), they are severely criticized, she says. “Our mistakes are magnified and exaggerated,” says Eshika adding that rather than being viewed as musicians, they are perceived as “exceptions to the rule” and too much is focused on them being a female band than the kind of music they are putting out. “That isn’t necessarily wrong or bad but we would like to be judged on the basis of our music,” she says.

But there’s a brighter side to this as well. With nearly 12,000 likes on their Facebook page, Gorkhali Girls Band has quite the fan following. And everyday tens of people send in messages telling them that they feel encouraged to consider music more seriously because of the band. “They tell us that we have opened up a whole new world of possibilities for them and express how grateful they are. For us, there couldn’t be a bigger compliment. It makes all our troubles worth it,” says Mrinal.

And there have been plenty of troubles. From parents restricting hours and late night shows to the crowd behaving irresponsibly and them having to ask for extra protection, things have never been easy for the band and they don’t seem to be getting better either. “All we can do is keep making music and live up to all that is expected of us,” concludes Renu.

Sarun Tamrakar is a member of the band The Uglyz. And the members of the band live all over the... Read More...

The Week’s Ashma Chhetri caught up with Rana to know about his journey so far as well as find out... Read More...

293 new cases of coronavirus recorded in the past 24 hours: Health Ministry
30 minutes ago

Oli, Dahal agree to meet again for agreement
59 minutes ago