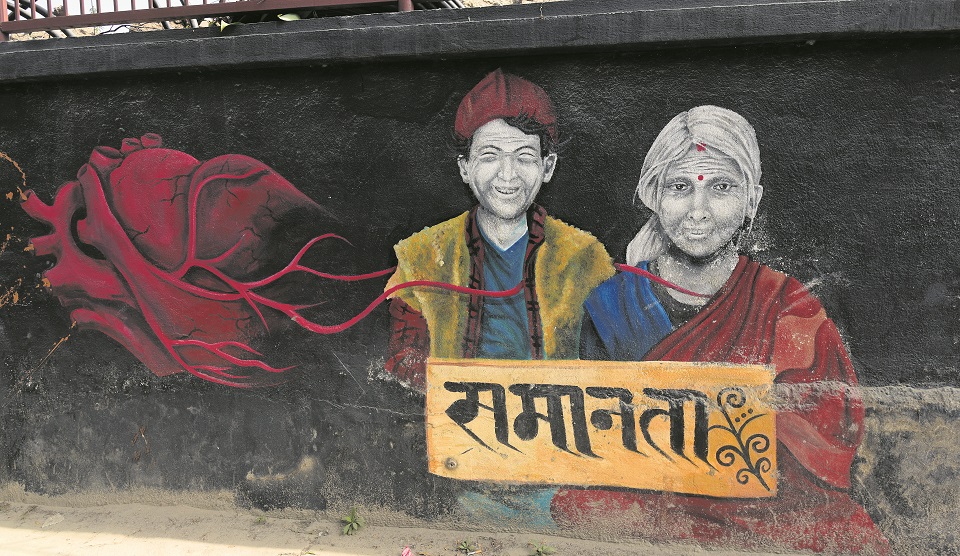 Most murals or street art, along with their aesthetic values, have some sort of social message. Some street art might criticize the actions of the government while others may be telling spectators to embrace their own culture and traditions.

Artist Kiran Maharjan says that art galleries declining to exhibit his works was perhaps the best thing to have happened to him.

“That’s when I decided that if I couldn’t showcase my work through an exhibition, I would make them available to the public through the walls on the streets,” says Maharjan who took to street art that way and goes by the pseudonym H11235. And he has been doing so for almost a decade now.

Maharjan confesses that street art initially caught his interest while he was skateboarding at parks that were often filled with graffiti and murals. Today, he has traveled to several countries, participating in various street art festivals, and has had his works up on big buildings and walls around the world.

The need for humans to leave their mark wherever they lived can be traced back to the stone ages. The carvings found in caves are a good example of that. One of the earliest examples of graffiti dates back to 78 BC in early Roman Empire cities like Pompeii with popular themes of sex, wine, money, and politics.

In the 1940s, ‘Kilroy was here’, a graffiti showing a man with a long nose peeking over the top of a wall became popular among American soldiers and later spread all over the world. This was one of the first examples of street art receiving worldwide recognition.

Even then, in most parts of the world, street art or graffiti was seen in a negative light as it was related to vandalism with people sneaking in at night with masks and spray cans and drawing on private properties.

But Maharjan argues that this view is mostly concerning the western society and that the story is a bit different here in Nepal. “For Nepalis, art happens on the streets. Be it a ‘jatra’, a wedding or any other festivities, our culture is all about putting it out on the streets so people can see and enjoy it,” he says.

And so, he believes that Nepalis have been largely accepting of street art. “I have seen people come together and strip walls of posters and other random notices just because there was a mural there,” he adds.

HY:DE, another street artist based in Kathmandu, says that the street art scene in the city has been growing over the past few years and the niche mostly comprises of young up and coming artists.

“Young artists have decided that they want their art to reach the public on their way to work rather than them having to stop by a museum and buy a ticket,” he says. Moreover, as majority of Nepalis don’t visit museums for an art exhibition, street artists believe that art should be brought to them instead of them having to go find it.

“Art can bring about so many changes in the society but that isn’t possible if limited people have access to it,” he says.

Most of these murals or street art, along with their aesthetic values, have some sort of social message. Some street art might criticize the actions of the government while others may be telling spectators to embrace their own culture and traditions. HY:DE gives an example of the time when people took to the streets demanding the controversial ‘Guthi Bill’ to be scrapped. Several street artists had joined hands to work on making murals and art supporting the cause.

“Street art helped reinforce the importance of culture and tradition here in Kathmandu and ensured people that they were fighting for the right cause,” he says.

Anu Bhattarai, accountant at National Airlines Corporation, says she has been teary-eyed seeing some of the murals on sensitive topics like domestic violence, sexism, and poverty. “Often we become desensitized to various important matters due to overexposure on the news. But when we see the same thing being uniquely portrayed by an artist, it helps us remember how grave the situation actually is,” she says.

And indeed, street art, all over the world, has always been about making an impact. But the level of impact street art can make is often up for debate.

Kosmic, another street artist based in Kathmandu, says to believe that street art can become the sole thing to drive change in a society is nothing more than wishful thinking. He believes street art can help catalyze a change but it takes much more to bring about a change or revolution.

“Street art hopes to inform and bring awareness in people who view it so that they can voice their own opinions about issues that are prominent in their communities,” he says adding that the core objective of street art is to get people thinking.

Both HY:DE and Kosmic agree that street art equally focuses on beautifying a place as it does on giving out a message.

“Kathmandu has become this advertisement-heavy concrete jungle and so it feels nice to create and add something that is not manufactured to Kathmandu’s landscape,” says HY:DE. Similarly, for many street artists, street art is also a means of self-expression. Rather than just being about social issues, a mural can be something intimate and personal as well. “Like any other art, some have clear meanings while others are abstract. Just because it is street art doesn’t mean it has to make sense all the time,” says Kosmic.

However, according to Maharjan, even now, there are two sides to street art. One is the rebellious, vandalistic side where artists write and draw as a form of artistic expression without permission and the other is the more open approach of asking for permission, teaming up with fellow artists and taking enough time and care to make art that can truly make a difference. “In the end, it all depends upon that one particular individual and the way he/she wants to make a difference,” he concludes.

KATHMANDU, June 15: Nepal America Film Festival 2021 that has been organized at Maryland State of the United States of... Read More...

Narad Mani Hartamchhali, head of Architecture and other creative arts at the Nepal Academy of Fine Arts, has dedicated more... Read More...

It is difficult to run hotels according to the prevailing policy: HAN
11 minutes ago