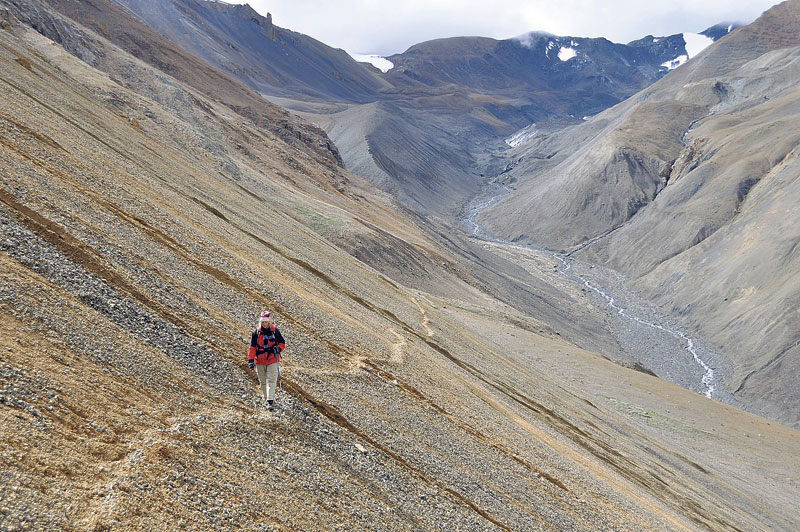 A trekker along the Terilla Pass trekking route in Upper Mustang in this undated photo. Photo: Republica Files

POKHARA, Oct 16: Earlier it would take three weeks for tourists to trek through the Annapurna Circuit. After the introduction of transportation facilities, one week of trekking suffices. Length of Annapurna Base Camp (ABC) has shortened.

The royal track, which was very popular once, does not look busy at all these days.

These are just a few examples of how the Annapurna region is losing its charm as a popular trekking region.

The gradually narrowing down of trekking routes owes it to the newly opened road tracks. Even though there were discussions on discovering new trekking routes to woo tourists, this is yet to happen.

“We need to do develop and brand new routes. The old routes have been displaced by motor roads,” said Deepak Adhikari, president of Trekking Agencies Association of Nepal (TAAN). “If new routes are not identified and branded while old routes continue being displaced by roads, no tourist would come here,” he added.

Diverting tourists in lack of trekking route causes huge loss to the Annapurna region. The old routes were attractive and to make the new ones equally thrilling is a huge challenge, Adhikari stressed.

He further stated that some of the routes were globally popular as most adventurous trekking routes. “Those routes were extremely attractive and had received global popularity. But now, vehicles ply along those routes,” he said.

According to Adhikari, the decreasing attraction of trekking in the region could have long term impact on the tourism industry. Those aiming for Annapurna trekking route are already being diverted to Kanchenjunga, Gaurishankar and Ganesh Mountain routes. The growing use of vehicles in the circuit is eroding the charm of the Annapurna region.

There are a few other trekking routes in the Annapurna region, which have not been affected by roadways. However, they are not attractive enough to draw tourists, says Adkhikari. “Trekking routes must be adventurous. If they lack challenges, the thrill is affected and tourists do not love to trek along such routes,” he explained. “Without delay, we must develop and promote new routes. First we need to identify best trekking routes and brand them.”

There is high potential of new trekking routes through Terilla pass, Dhawalagiri - Italian Base camp, Dhawalagiri Icefall, Dhorpatan - Jaljala area, Lete - Kalopani area and Fu - Siruwang area, among others, stated Adhikari. These routes have another advantage. There is least possibility of ever opening of roadways, he said. “If new trekking routes are opened through those areas there will be no dearth of tourists.

They will overflow. The best thing about those routes is that, they hardly have any possibility of having roadways for at least 20 to 30 years,” he said.

Also the lack of human settlements is an attraction in the cited routes. Without human settlement, trekkers get to feel even more special about their journey. However, this also means that hotels and eateries for trekkers would have to be established, he added.

“If we can brand the new routes well, tourism is going to thrive within a little time. Slacking tourism industry will recover dramatically,” Adhikari said. “Or else, tourists will literally stop visiting Annapurna region,” he warned.

So far, a handful number of tourists have been through these potential routes, according to Adhikari. Feedbacks from these tourists are very encouraging. “From Naar area of Manang, you can get to Terilla pass and get to Upper Mustang. The route is extremely thrilling,” he said. “But we have not been able to professionally draw tourists along this route. Very few, which you could count on fingers, have traveled through this route till now,” he said.

Adhikari stressed for the need to ensure shelter house, tea - house, toilets and marking boards in potential routes. “We need to be first sure of developing those routes into real trekking routes and then make a plan to develop them. Very essential facilities have to be there for trekkers,” he said. He added that just campaigning will not work. Needed infrastructures have to be in place for things to work.

Former president of TAAN, Ram Chandra Barma, voiced concern that the haphazard opening of roadways is not healthy for the Annapurna region from any angle. “Roads along the region should be opened only after assessing its impact on environmental and other aspects. If not, such roads give more troubles than benefits to the locals,” he said.

Barma further stated that tourism entrepreneurs and the government must work hand in hand to promote tourism in the region.

BENI, Oct 16: The trekking route along the Annapurna Conservation Area is being shorten with the rampant construction of trial roads. Read More...