Road to Mustang getting blacktopped 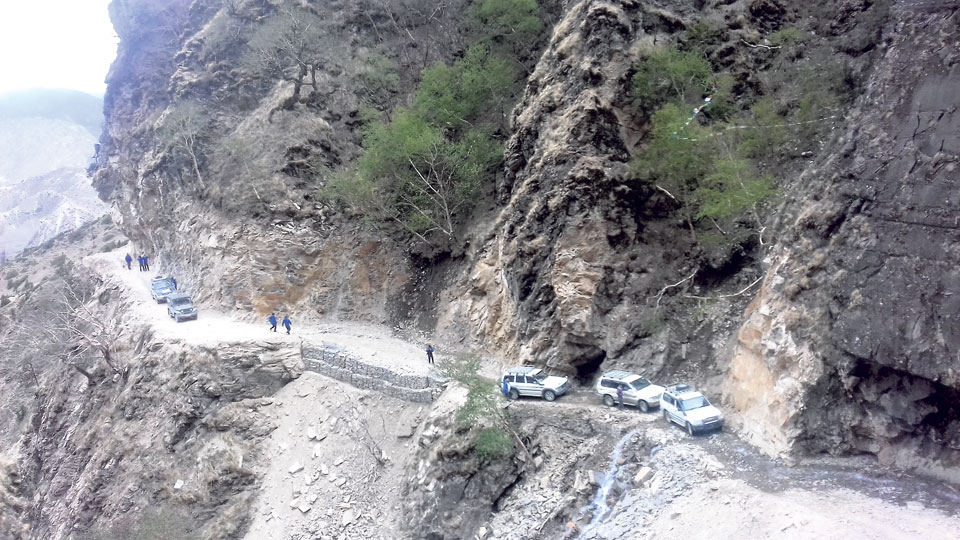 POKHARA, Aug 3: The narrow and perilous Beni-Jomsom-Korala road, which connects Nepal with the Tibet Autonomous Region of China, is finally upgraded.

The government has planned to use the road for bilateral trade with the county’s northern neighbor, also an Asian economic powerhouse. The road is undergoing upgrades and is been divided into two sections for the purpose, according to Narendra Subedi, chief of Beni-Jomsom-Korala Project.

Blacktop would be done in 78-km road from Beni of Myagdi district to Jomsom of Mustang. Subedi informed that four companies are involved in the road blacktopping. “The roads would be blacktopped so that vehicles can move from both ways,” he said, adding that the project would be completed in about two-and-a-half years.

“At the moment, we have not been able to continue the project as planned because of rain. But we’ll make sure the project is completed in 30 months. This road section would be as qualitative as other highway,” he further added.

A total of Rs 2.4 billion is invested on the project, according to the project office.

The office has signed contract with four contractors to procure necessary equipments and implement the project. If everything goes as planned, the Beni-Jomsom road would be completed within just 1.5 years, the office informed. Upon the completion, domestic and foreign tourists visiting Mustang would get a huge relief.

Likewise, the 110 km Jomsom-Korala road section, which lies in the Upper Mustang region, would be fully graveled as part of the project. Seven construction companies are working on this road section and 15 percent of the work has been completed so far, Subedi informed.

“Jomsom-Korala road too would have two ways with a width of 9-11 meters. The upgrade is gathering pace. It would cost us Rs 2.5 billion,” he added. The office claimed that Jomsom-Korala road would be upgraded within one-and-a-half year.

Project officials are of the opinion that transportation through Beni-Jomsom-Korala road has not eased so far. But, it claimed that the upgrade would greatly ease transportation along the road while becoming an important agent for bringing prosperity to the region. The upgrades would, among others, cut distance to Mount Kailash pilgrimage by half, according to locals. It also has potential to increase trade with China.

Mustang-based Nepali Congress Leader Romi Gauchan said the upgrades would pave ways for the region towards prosperity. “Mustang would reach very high in terms of development after the road upgrades. It would open doors to many opportunities.”

Road to Mustang road being blacktopped

POKHARA, August 3: The narrow and perilous Beni-Jomsom-Korala road, which connects Nepal with the Tibet Autonomous Region of China, is... Read More...