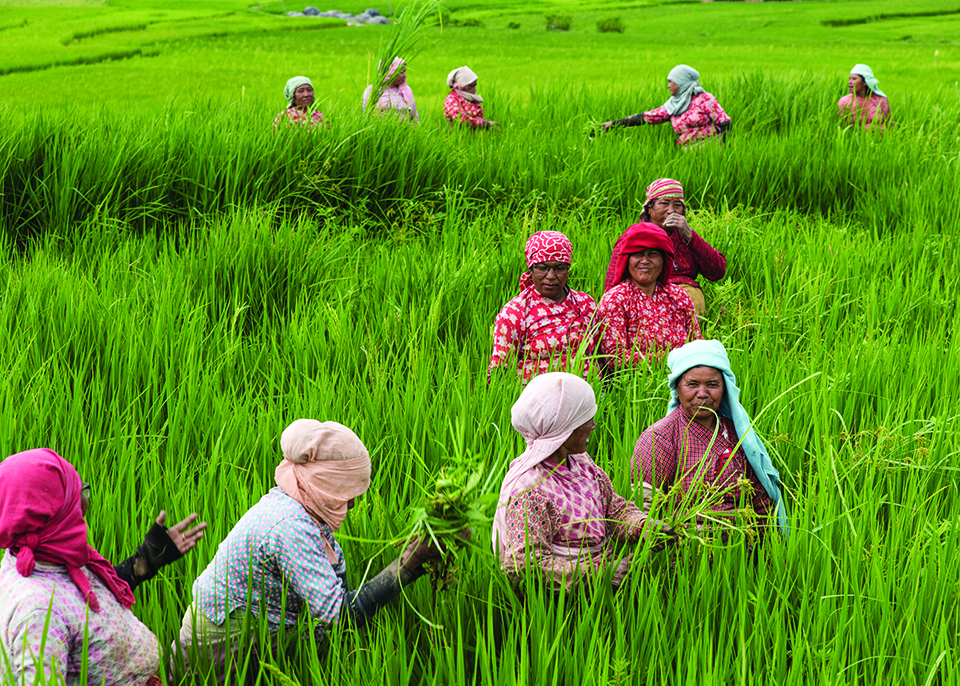 If Nepal is to speed-up agricultural commercialization process for both import substitution and export promotion, there is no better way than consolidation of farm lands

Commercialization of agriculture is directly related with landholding patterns. Small farms with fragmented holdings are appearing as challenging factors in commercialization process. Almost half of the holdings in Nepal are of less than 0.5 ha size. Not only the holding sizes are small but they are also highly fragmented with an average of more than three parcels per holding. The common practice is that possessions of lands are divided and further divided among heirs turning them into smaller sizes at no time. High rate of population growth, infrastructure development, legal provision based on inheritance division and land tenure systems are the main reasons for such small holdings and fragmentation patterns. Such practices have negative impacts on commercialization of agriculture. Land fragmentation is said to harm productivity in a number of ways.  Fragmented land is considered as a major obstacle to agricultural mechanization causing inefficiencies in production. These inefficiencies virtually result in high cost of production. The conversion of fertile agriculture land to non-agriculture land use is another problem.

If Nepal is to speed-up agricultural commercialization process for both import substitution and export promotion, there is no better way than consolidation of farm lands. Nepali farmers who hold small parcels of land may come together and get organized into cooperatives for consolidation of their lands, production and marketing. In my previous article, I had written that commercial agriculture or market-oriented farming would require a more ‘entrepreneurial’ approach to farming. Some of the commentators of this article have suggested that not only entrepreneurial approach of farming, but consolidation of land is also necessary for commercialization. For the purpose of farming, land consolidation can be achieved through a number of measures such as cooperative farming, contract farming and land leasing.

Agricultural cooperatives also play an important role in supporting small agricultural producers in many other ways. Such cooperatives offer them a wide range of services including improved access to markets, natural resources, information, communications, technologies, credit, training and warehouses. Farming through cooperatives would also help the government in providing irrigation, agriculture inputs, insurance, mechanization and technological services to farmers. They also facilitate smallholder producers’ participation in decision-making at all levels, support them in securing land-use rights, and negotiate better terms for engagement in contract farming and lower prices for agricultural inputs such as seeds, fertilizer and equipment. Nepal’s new constitution makes strong commitments to cooperatives, many of which are agricultural. Thus there should not be any legal issues for agriculture promotion through cooperatives.

Contract farming refers to a system where a buyer purchases the harvests of independent farmers and the terms of the purchase are arranged in advance through contracts. Contracting is fundamentally a way of sharing the risk between producer and contractor. The former takes the risk of production the latter that of marketing. In most of the cases, it is also a better solution to small farm size.  Agricultural production under contract between producers and their buyers has long been practiced for many agricultural commodities, in most countries around the world.

It is also seen as a potential tool for reducing poverty, contributing to rural development and employment, and increasing food security. This involves a buyer guaranteeing to buy farmers’ produce provided they grow what the buyer requires and meet quality standards. Sometimes the buyers also provide inputs and technical advice for production.

But Nepal has yet to enact a legislation on contract farming. The establishment of Contract Farming Agreement will be legally binding upon both the farmer and the contractor once they have signed the documentation under the Law of Contract. It is essential that such an agreement is documented and signed to protect both parties whilst at the same time providing clarity over areas that could be misunderstood or that cover areas that happen rarely. A good contract farming agreement which delivers returns for the farmer and leaves the contractor with an adequate surplus will leave both parties happy. The government has prepared a draft of the new Agriculture Enterprises Promotion Act that, among other things, envisages paving the way for contract or lease farming and promises incentives to insurance companies to sell farm insurance policies.

The Agricultural Development Strategy (ADS) looks to increase farm size through a ‘land lease’ corporation. This is an innovative solution where farmers voluntarily lease their farmland to the corporation, with the right to take back the land at the end of the lease.  The corporation would then lease out the land to other users, combining landholdings to create bigger farms. Making this work would almost certainly be part of the solution to the problem of small farm size that cooperatives also respond to.

The ADS also recognizes the critical importance that farmers’ access and control of the means of production—primarily land—has for the success of the strategy. Critical land issues such as tenancy, fragmentation, degradation and land use planning need to be resolved. This will require the participation of the farmers’ organizations, cooperatives, and private sector in order to find equitable and efficient mechanisms for enhancing land productivity.

Moreover, unregulated and uncontrolled land use has converted considerable amounts of arable lands into non-agriculture use. Realizing this fact, the Land Use Policy has a strong focus on managing agriculture land but it has remained unimplemented. The implementation of this policy with some amendments could be the first step to the sustainable use of agriculture land in Nepal.

We need to make agriculture governance system effective through the backup of strong organizational set-up and human resources ... Read More...

Two years after National Farmers’ Commission started to work, people are asking why we need such commission when it cannot... Read More...