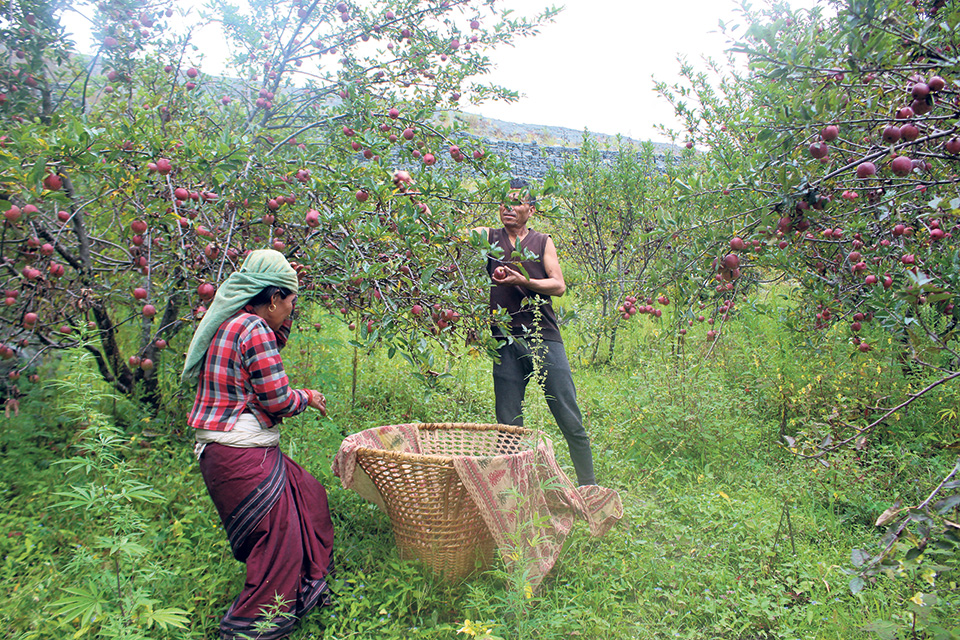 MUGU, Aug 31: Farmers of Mugu are worried for their produce is about to rot as they have not been able to take apple to the market.

Incessant rain for the past many weeks has damaged Gamgadi-Nagma road section - the only road that connects the district to other parts of the country.

As a result, local farmers have not been able to send apples to markets in Nepalgunj, Surkhet and Kathmandu. The rainfall also caused premature dropping of many apple fruits.

Hari Bahadur Rokaya of Chayanath Rara Municipality said local apple farmers used to earn Rs 150,000 to Rs 200,000 each per season. “This year they were expecting to earn Rs 400,000 each this season due to good production. But premature dropping and road obstruction has thrown cold water on their hopes of bumper harvest,” he added. “We have not been able to send apples to market.”

Another farmer, Bishnu Devi Rokaya, said that many farmers are worried as apple is main source of income generation for them.

Officials of District Agriculture Development Office (DADO) told Republica that the office has distributed cartons to farmers to help in transportation of their produce. Though there are sufficient storage facilities in the districts, farmers say such centers cannot preserve fruits for long.

Though DADO Mugu claims that it has distributed 4,600 cartons to farmers, farmers say it is not sufficient.

DADO Mugu had estimated apple production to grow by 60 percent this year. But unfavorable weather conditions and road obstruction will impact production, according to Tej Bikram Malla, a technical officer with DADO Mugu. “As it is very expensive to transport apples to the market by using air service, we are worried that majority of the production will go to waste this year,” he added.

Apple grading machine, which was introduced in the district seven years ago, has not been brought to use yet.

DCA invested Rs 2 million to procure the machine from India, while remaining Rs 6 million was borne by Fruit Development Directorate, Kirtipur. The machine was kept under sky for nearly two years due to delay in finding a place to accommodate. This caused some parts to rust even before the machine came into operation“.

"The machine cleans the fruits and sorts them into different categories based on their size. When the machine was brought into the district, we had expected that the machine would further flourish apple farming in Jum”a," he said, addin“: "Unfortunately, it didn't happen."