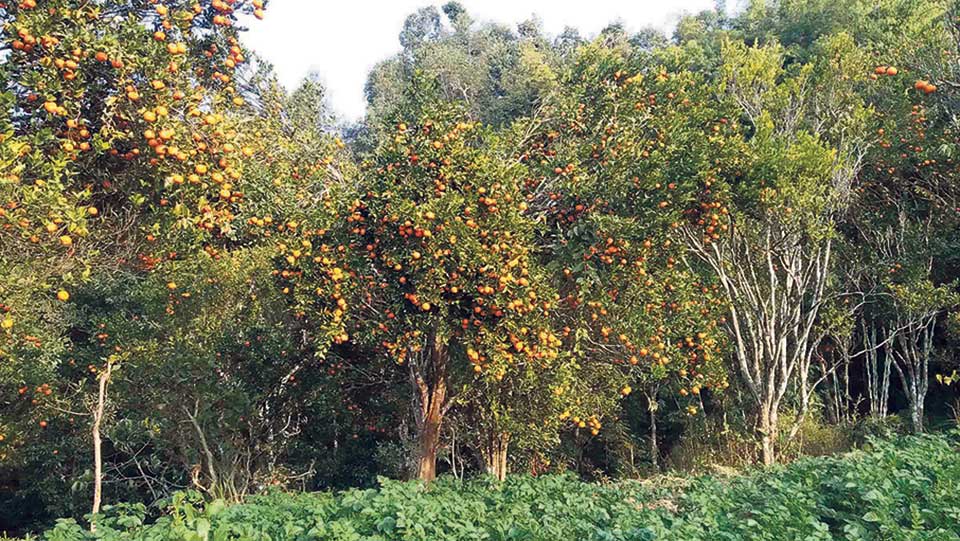 KHOTANG, Feb 27: Until few years ago, locals of Yamkha in Khotang had no option but to carry oranges on their back to the market in neighboring Udayapur district.

However, things have changed with the construction of road linking Yamkha with neighboring Udayapur districts. Local farmers can now take their agri products to the market in tarai districts by using tractors and even passengers buses coming to the village.

Ramnidhi Acharya is one of them. Traders of tarai districts took 76,000 units of oranges from his farm by paying Rs 4 unit. "Before construction of the road, we had to take oranges and other agri products to the market by carrying them on our back. Things are lot easier these days," he added.

Acharya has done orange farming in 0.62 acres of land. This year he earned Rs 400,000 from orange farming – a substantial increase compared to the days when the village had no road access. He also produces lime and cardamom.

Similar is the story of Ram Bahadur Kunwar. He said that local farmers have been able to utilize buses and tractors coming to the village to take their agri products to the market. "Before the road was built, we could earn very little as we could not take our produce to the market," he said, adding: "Road construction has turned our fortunes around."

Kunwar, who made a sizeable earning from orange farming, said five crates of oranges grown in his farm were even exported to the United

An orange tree in the village bears fruits worth around Rs 35,000 per season. This year local farmers earned over Rs 2 million from oranges alone.

KHOTANG, Dec 15: A temporary bailey bridge has been constructed over the Sunkoshi River in Phoksingtar, along the border between... Read More...

No market for oranges grown in Doti

DOTI, Dec 21: Farmers are worried that they will not be able to easily market fruits including oranges grown on... Read More...