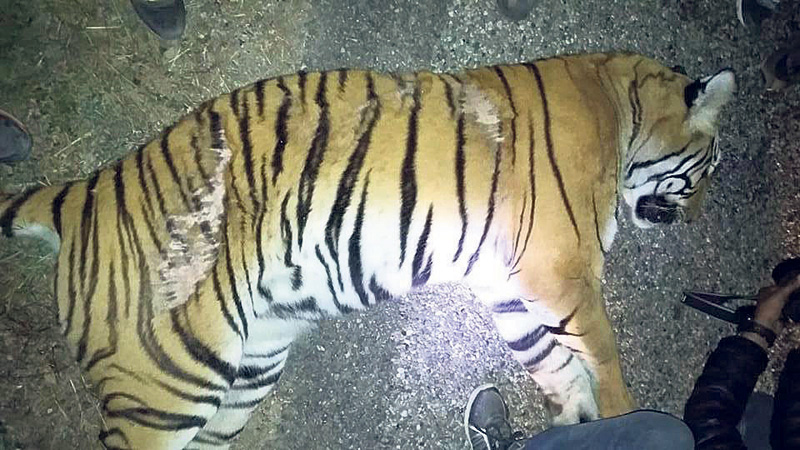 A royal Bengal tiger was killed on Wednesday night at the Karnali-Amreni road section of the East-West Highway inside the Bardiya national Park after being hit by a bus. Photo: Republica

BARDIYA, Dec 24: Although the number of tigers and other wildlife in Bardiya National Park (BNP) has reportedly increased, their conservation still remains the biggest challenge due to threats from man-made infrastructures.

Just recently an adult tiger lost its life after being hit by a bus at Kuwabhar along the Karnali-Amreni road section of the East-West Highway. The tiger was attempting to cross the road when it got hit by the bus en route to Kathmandu from Dhangadi. Such risks of accidents were foreseen but neglected. If such accidents repeat, it is bound to be a huge blow to the conservation efforts of tiger and other wildlife.

Tigers have faced increasing threats to their survival due to poaching. They are hunted down for various body parts that yield high prices for the poachers and the chain of smugglers involved in it. Already an endangered species due to rampant poaching, tigers are facing further challenges from increasing encroachment of their habitats by human settlement. This is resulting in tiger-human conflicts. Such conflicts results in retaliatory killings of tiger, another big threat to conservation efforts.

Of late, however, the biggest threat to tiger conservation has turned out to be road accidents on highways that pass through the BNP.

Of late, however, the biggest threat to tiger conservation has turned out to be road accidents on highways that pass through the BNP. Road sections such as Chisapani-Ambasa and Sainwar-Rambhapur fall within 40 km range from the park. Although there are four posts of Nepal Army to safeguard tigers from hunting and poaching, they cannot save the tigers from road accidents that take place in those road sections.

Dense fog during winter affects visibility of hundreds of vehicles passing along the highway. Such vehicles, which usually move at high speed, can take life of another tiger and other wildlife anytime, pointed out the park's administration.

“Saving tigers from road accident has been very difficult for us. The roads always pose huge risk for tiger conservations as vehicles can hit the tigers crossing the road and kill the already endangered species,” said Ramesh Thapa, conservation officer at the BNP.

“As a move to prevent such accidents in the future, we are issuing time-cards to vehicles that ply on highway across the park. We expect the move will restrict the vehicles from speeding.”

BNP is home to an estimated 100 tigers presently. In the census of 2009, the park had 37 tigers, which reached to 50 in 2013 census. Banke National Park, which is nearby BNP, has about seven tigers.

Increase in tiger population has brought happiness in the tourism industry as well. “When I started my enterprise, tourists wishing to observe endangered tigers have to camp inside forest for at least a week. But the scenario has changed now,” said Shankar Bhattarai, a local tourism entrepreneur. “Now observing tigers are not as difficult and rare like in the past. Having the opportunity to see tiger makes tourist very happy,” he shared, adding that the number of tourists visiting the park to observe tigers also have increased of late.

Conservation officer Thapa said coordination of locals in wildlife conservation has played a big role in the increase in tiger population. “Local youths actively coordinate with Army personnel for safeguarding the inhabitants of the park. Also, as many tourists visit the BNP for the purpose of observing tigers, increase in their population has given a big boost to local tourism,” he said.

Nepal has made an outstanding achievement on conservation sector. Yes, problems remain. Our wild animals still face the threat of... Read More...

PAANCHTHAR, June 11: mLocal units of Panchthar have started conducting programs for creating awareness among the people regarding the conservation... Read More...