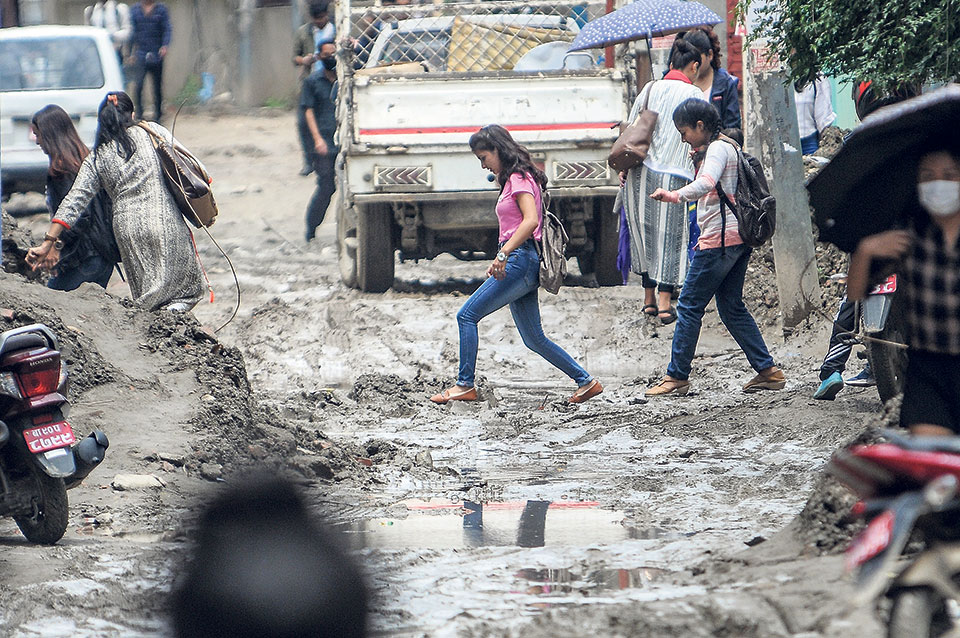 It’s the same story every monsoon season. As dug up roads become waterlogged and thus muddy, leaving our homes becomes a risky affair. Pedestrians slipping and falling and bikes and cars getting stuck in mud pits are common occurrences. And, the construction and reconstruction of roads right before the advent of the new fiscal year (which falls exactly during the monsoon season) only make matters worse.

According to a notice issued by the Central Regional Directorate (CRD), under Department of Roads (DoR) on June 16, 2018, digging of roads for sewage repair, installation of pipelines, and maintenance of utility poles has been prohibited for the next three months. But the decision that was supposed to keep roads in good condition during the monsoon season has, in turn, brought about many problems among the valley residents.

According to Ramesh Kumar Singh, assistant spokesperson at DoR, a strict monitoring system has been setup for the surveillance of every road. The department is determined to ensure that no road is dug up for the next 90 days. However, imposing this rule to avoid further chaos on muddy monsoon roads also means that if someone were to suffer from sewage, water, or electricity related problems, s/he will have to wait for three months to have the issue resolved.

“Our primary concern is to make walking or driving on the roads convenient during the monsoon season,” says Singh adding that the decision will also go a long way in preventing road accidents as well. But as construction projects that have already been given to contractors are still underway, Kathmandu residents can forget about convenient commuting. Singh also says that development plans such as the Melamchi Drinking Water Project will also not be halted this monsoon, which means more roads will be dug up.

So even this year, like every other year, city dwellers will be compelled to face the atrociously muddy roads dug up by big infrastructural projects. Another major problem during the monsoon season is that of inefficient drainage and sewage system. Although there are numerous government authorities that manage the water supply and sewage system in Kathmandu, no one seems to be taking their responsibilities seriously. When the scribe asked Shankhar Prasad Subedi, joint secretary and spokesperson at Ministry of Water Supply, about the solution for efficient water and sewage system for each house in Kathmandu, he claimed that his ministry had bigger matters to tackle.

According to Subedi, they are not responsible for monitoring the efficiency of underground water supply system at every house in the valley. Also, it does not fall under their jurisdiction to make sure the roads are blacktopped after the pipelines have been laid.

Every year, the monsoon roads not only cause problems for daily commuters but also lead to horrible road accidents. Binita Phuyal, who studied in grade three, got severely injured last year when she was heading back home from school. A day later, she lost her life at the hospital. Only a day after her death, the footage of Satya Sapkota drowning in improperly managed sewage near Samakhushi chowk went viral on social media. However, even after such horrific accidents, the concerned authorities don’t seem to be all that bothered.

The reality is that even the biggest roads in the city such as those in Jamal, Putalisadak, Ring Road, Bus Park, and NAC get flooded after the slightest of rain. According to assistant spokesperson Singh, the DoR is only responsible for efficiently draining out rainwater from the roads. “During monsoon, water from private houses also flows into our roads causing waterlogging problems. We can’t manage water that flows into our roads from different places. We aren’t responsible for that,” says Singh. So while those accountable for proper management of this system are busy dodging their responsibilities, it’s the citizens who are compelled to bear the brunt of it all.

However, according to Basanta Acharya, information officer at Kathmandu Metropolitan City (KMC) Office, one of the primary reasons for waterlogging during monsoon is pedestrians throwing plastic waste on the roads that leads to the clogging of the drainage system. “Our reckless habits bring us troubles like these,” he says.

Acharya also says that KMC is only responsible for maintaining roads that are up to eight meters wide. According to him, all roads that fall under their jurisdiction are in good conditions. He says only those roads that are more than eight meters’ wide are in deplorable states. “If the DoR gives us the authority to take care of all the roads in the valley, the condition of our bigger roads will be much better than it is today,” he adds.
Fancy prevaricating talks aside, in reality, from the smallest to the biggest roads in Kathmandu are in a mess. Accidents on the roads have become extremely common due to pathetic roads, poor drainage and inefficient technical town planning. And the problem is exacerbated even more due to the lack of coordination between various interrelated departments such as water, sewage, drainage, electricity, and roads.

The spokesperson at the Ministry of Water Supply stated that they work in collaboration with KMC and DoR. But the scenario out on the road paints a different picture as the same roads are dug up and reconstructed for different purposes at different times of the year.

Information officer, Acharya, blames the other departments for their lack of interest in collaborative work. According to him, there is no larger framework or guidelines that holds these departments together. Roads are dug up for different reasons at different times of the year because every department does not have the budget to work on the same road at the same time.

“We try to conduct meetings frequently so that we can all work as a team. This would ensure that the same road is not dug up for different purposes every year. But, to be honest, no one seems interested to put in that extra effort,” he claims.

In such a scenario, even as our top leaders keep harping about taking Nepal to new heights through various development projects, valley residents are left with the sinking feeling that no progress can be made when there is such mismanagement and lack of collaborative effort among the many government bodies.

Here is what a few residents have to say about this never-ending ‘muddy road’ problem.

The road that leads to Ramkot from Sitapaila is filled with mud and puddles. It would be an understatement to say that it’s difficult to drive in that stretch. When it rains, only huge trucks can pass through that area and that too if they are lucky. Walking there even when it’s not raining is a Herculean task.
The 2.5 kilometers long stretch feels like more than 10 kilometers. When the road is not wet, it becomes so dusty that it’s difficult to see a few meters in front of you. It’s sad that an area in the capital city is in this state and our government can’t be bothered to do anything about it.

Almost everyone in Kathmandu is going through the same problem so I don’t even complain anymore. We are all in the same boat.

The street in front of my house was dug up to maintain the sewage system. As a result, no vehicle could enter or leave the area for more than a week. It also became difficult for children to go to school and adults to head anywhere for work. You could say people were held captive in their own homes because there was no place to walk. Even the water tankers could not come to refill our tanks, so there was scarcity of water at one point.

It has been more than a month and half since the road in front of my house got dug up to lay water pipelines. During the rains, the path gets so slippery that it becomes difficult to walk. Bike accidents and people hurting themselves by falling down has become very common.

It infuriates me to say that this is not the first time a nicely constructed road has been destroyed in my area. It happens at least two to three times in a year. Sometimes the road is dug up to install water pipelines and sometimes to manage sewage. The sad thing is the destruction takes place at a much faster rate than the reconstruction process.

The government of our country only wakes up during the month of Asar (June-July). When monsoon is at its peak, they start road constructions. The roads are so muddy and dirty at this time of the year that I’m worried about my children’s health.

It almost feels like a punishment to walk on the streets of Kathmandu. Our shoes and clothes also get dirty in no time. When I’m out, all I can think about is getting back home and washing my feet. But sadly, there is also scarcity of water and I can’t wash my clothes and shoes every day.

PANCHTHAR, March 9: With the water current eroding one of the pillars of the concrete bridge over the Tamor River at... Read More...

KATHMANDU, Nov 11: At least 35 metric tonnes of solid waste have been managed under the clean-up campaigns of different... Read More...