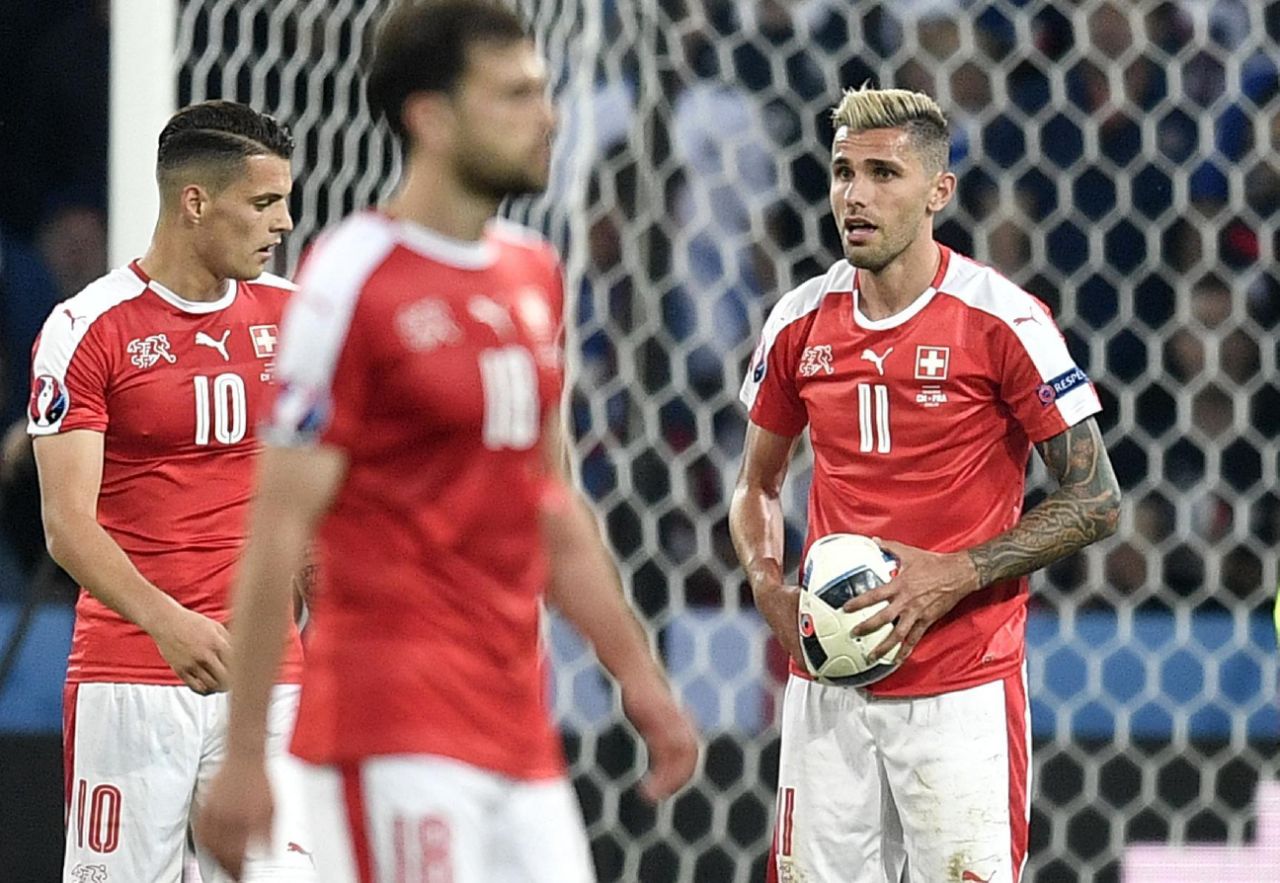 Switzerland's Valon Behrami, right, holds the deflated ball after it burst during the Euro 2016 Group A soccer match between Switzerland and France at the Pierre Mauroy stadium in Villeneuve d’Ascq, near Lille, France, Sunday, June 19, 2016. AP

LILLE, France, June 20:Though teams often swap shirts with their opponents after a game, Switzerland's players were forced to change their own ones several times in an eventful 0-0 draw with France at the European Championship on Sunday.

Along with the four ripped shirts there was another unusual sight as the ball burst in the second half of a draw that sealed Switzerland's place in the last 16, alongside an already-qualified France.

Granit Xhaka, who tore his shirt once in each half, joked that perhaps some shirt tugging from the French was involved, because "it's the only way to stop a Swiss player."

But in reality France was the stronger side and squandered several scoring chances — which it also did against Romania and Albania.

The result ended up suiting both, with France taking first place in Group A and the Swiss advancing in second place.

Tournament host France hit the crossbar twice courtesy of spectacular strikes from Paul Pogba — from 25 meters — and substitute Dimitri Payet — with a volley on the run from Moussa Sissoko's cross. Switzerland caught the eye more for torn shirts than attacking play.

"It means there was a lot of fight on the pitch," Switzerland goalkeeper Yann Sommer said.

Switzerland midfielder Admir Mehmedi's shirt was torn in the first half, forcing him to the sidelines for a backup.

"We spoke with the referee about it," Switzerland midfielder Valon Behrami said. "But he said: 'it's the fault of your shirt.'"

Teenage striker Breel Embolo also slightly tore the back of his in the first half.

"If a shirt is pulled, they can come apart," Switzerland coach Vladimir Petkovic said. "When you pull shirts they do actually break."

France coach Deschamps preferred to turn his attention to the rough state of the pitch, which cut up in places.

"It was better than the pitch we saw at Marseille (against Albania) but it's annoying," he said. "I don't know who is responsible, but we are only in the group stage of the competition and having such a pitch is not a good thing."

Then there was the match ball, which also came in for punishment.

As France pushed for a goal in the second half, forward Antoine Griezmann was dribbling when Switzerland midfielder Valon Behrami stepped in to tackle. The two converged on the ball and it burst, with Behrami picking showing it to Slovenian referee Damir Skomina.

Just like in its previous games, France failed to turn possession into goals.

"Everyone hopes we play better, the players do and so do I," Deschamps said. "I'm not blind; I know we can do better."

Even with a new ball to strike, France's shots lacked conviction, and Griezmann held his head in his hands when he placed his strike too close to Sommer after swapping passes with striker Andre-Pierre Gignac and bursting into the area.

"Paul really was the driving force during the first half," Deschamps said. "He was the heart and soul."

The Swiss threatened mainly on the break, using the 19-year-old Embolo's pace, but France looked more likely to score as Payet shot just wide from outside the penalty area late on.

In the other Group A match, Albania beat Romania 1-0 and finished in third place with three points.

Thanks to Pogba, it seemed like France's midfield dominance might make the difference in the first half, but good situations were wasted.

France's main threat after the break was Sissoko, who made another powerful run and then fed the ball to Gignac, whose 53rd-minute shot was easily saved by Sommer. He had also scuffed a first-half chance after Griezmann had set him up.

But having scored an 89th-minute winner against Romania in a 2-1 win and an injury-time strike in the 2-0 win against Albania, he could not repeat it this time.

PARIS, June 20: France and Switzerland settled for a 0-0 draw that suited both sides, while Albania staked its claim... Read More...

MCC will be endorsed only after consensus among major political parties: FM Dr Khadka
19 hours ago