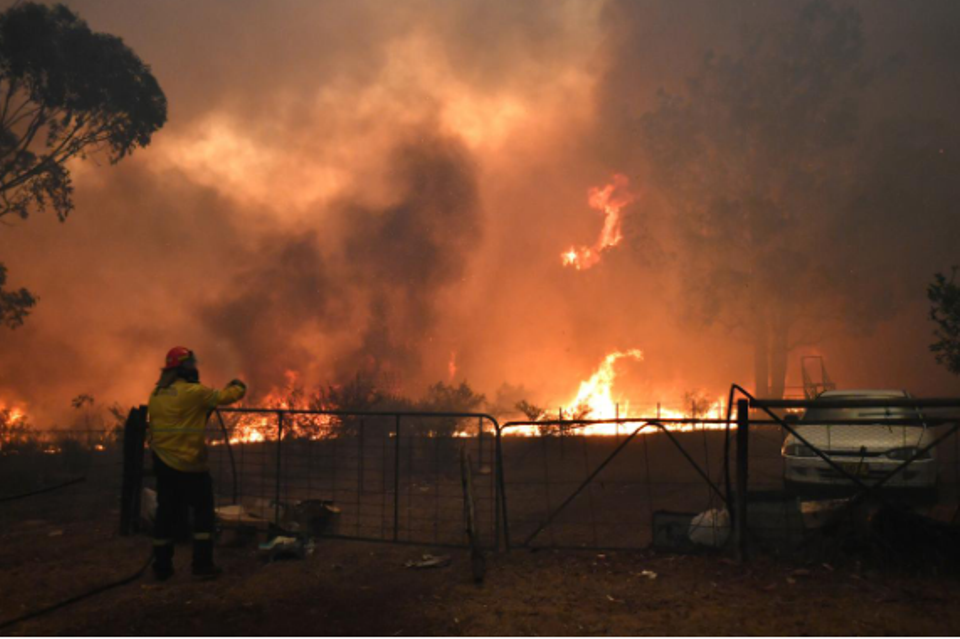 Rural Fire Service (RFS) crews engage in property protection of a number of homes along the Old Hume Highway near the town of Tahmoor as the Green Wattle Creek Fire threatens a number of communities in the southwest of Sydney, Australia, December 19, 2019. AAP Image/Dean Lewins/via REUTERS

SYDNEY, DEC 19: Australia’s most populous state declared its second emergency in as many months on Thursday as extreme heat and strong winds stoked more than 100 bushfires, including three major blazes on Sydney’s doorstep.

A day after Australia recorded its hottest day on record, thick smoke blanketed the harbor city, shrouded the Opera House and brought many outdoor activities to a halt.

The state of emergency declaration gave firefighters broad powers to control government resources, force evacuations, close roads and shut down utilities across New South Wales, which is home to more than 7 million people.

Authorities said nearly 120 fires remained ablaze by late afternoon, more than half of which are uncontrolled, and with temperatures forecast to top 45 degrees Celsius (113°F) in some areas, officials warned residents to be on high alert.

“The firefront has been spreading very quickly and intensely,” NSW Rural Fire Service (RFS) Commissioner Shane Fitzsimmons told reporters in Sydney, adding that two firefighters had been airlifted to hospital with burns to their faces and airways. “It’s still a very difficult and dangerous set of circumstances.”

Days out from Christmas, a time when many Australians head to the coast for the holidays, NSW Premier Gladys Berejiklian advised people to make sure “you are prepared to change your plans should circumstances change.”

“There is a large amount of smoke looming over the city, which shows how close the fire is,” Findley told Reuters by telephone. “It is extremely hot and windy now so we are all worried the fire could spread. People are really worried that they may lose everything.”

The RFS posted footage on its official Twitter account showing firefighters tackling one of the three blazes ringing Sydney. A waterbomber aircraft was dwarfed by thick grey and black billowing cloud as it attempted to douse flames in bushland just meters away from homes.

Australia has been battling wildfires across much of its east coast for weeks, leaving six people dead, more than 680 homes destroyed and nearly 3 million acres (1.2 million hectares) of bushland burnt. Berejiklian said as many as 40 homes had been destroyed on Thursday.

SYDNEY, July 4:  A United Airlines flight from Sydney to Los Angeles was forced to make an emergency landing at Sydney... Read More...

KATHMANDU, Sept 26: An aircraft of Nepal Airlines Corporation (NAC) that flew from New Delhi has made an emergency landing... Read More...