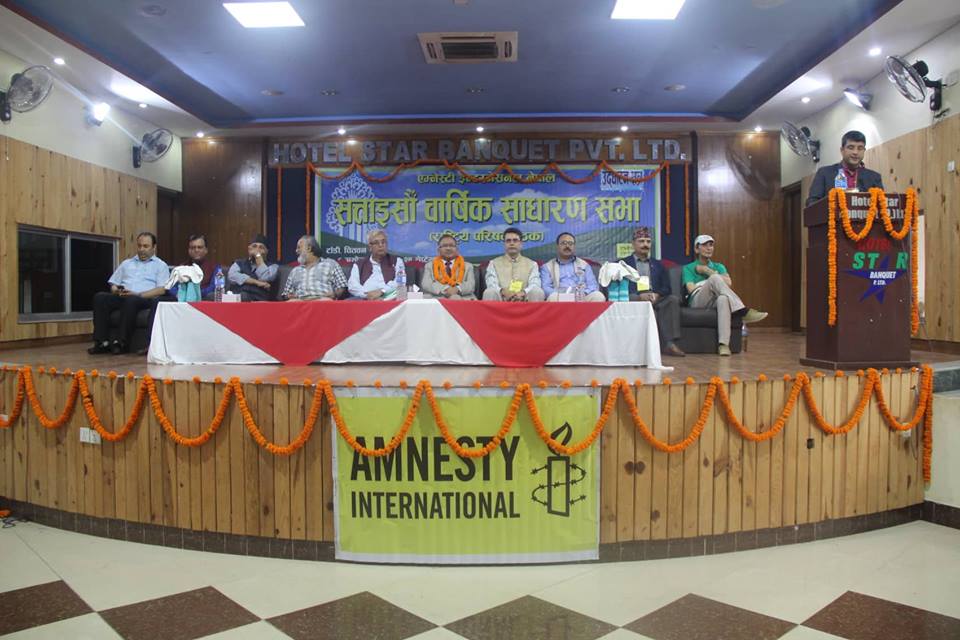 Activists suggested that as the government continually made efforts to restrict freedom of the press and human rights in disguise of “good governance”, citizens needed to be even more vigilant. Failure to do so would lead to suppression of fundamental human rights that have been enshrined in the constitution.

"The government is the custodian of human rights and should, in no way, restrict people from enjoying their rights," Nirajan Thapaliya, director of Amnesty International said. He added that the government is obliged to ensure the rights enshrined in the constitution and international treaties that Nepal has become party to.

In turn, speakers urged the government to effectively mobilize human and technical resources to protect, promote and help to implement the 31 fundamental rights. “Implementing it would be a herculean task, but it is an important step to strengthen free speech and human rights,” Kalyan Shrestha, former chief justice and the program's chief guest said.

Former Chief Justice, Kalyan Shrestha said while political stability helped to promote human rights, it wasn’t always the case. He argued that if citizens were unaware about their rights or were too lazy to fight for it, the government could curtail or even ignore human rights. “In democracy, if citizens ‘sleep’, the state can choose to ‘sleep’ or subdue human rights,” he said. To maintain checks and balances, he in turn urged activists to raise their voices collectively as it would reap concrete results, help to promote rule of law, transparency and accountability.

“Rule of law and an independent judiciary is integral to safeguard human rights, justice and end impunity.”

Former chairperson of Federation of Nepali Journalists, Harihar Birahi said that citizens needed to stay alert against any attempts by the state to curtail press freedom and free speech. He said that when the press was free, it encouraged debates and discussions to increase state’s accountability and protect the rights of the people. “If press freedom is curtailed, human rights will follow suit.”

Nepal became one of the youngest federal countries in the world after it promulgated the new constitution in September 2015. The three elections brought a majority government after almost seven decades and sprout aspirations among citizens that the country would, finally, take steps towards development and prosperity. Decentralization was expected to expedite economic growth and development and benefit the people from the remotest parts of the country.

Six months into the office as the country’s 41st prime minister, Oli continues to defend government’s slow paced actions as they are ‘learning by doing’. At Amnesty’s program, activists were wary of government’s efforts and the commitments, and suggested that hopes of development after political stability looked bleak. “The government has almost shown it’s not able to fulfill its promises. Federalism is benefitting selected people and those who voted for the government continue to wait to ‘feel and cherish’ the system,” Rajiv Neupane, secretary of Nepali Congress-Chitwan.

Former chairperson of FNJ, Birahi said that while citizens had hoped of development and growth after new political system every time, this hadn’t been the case. “We retaliated against political systems and brought new ones with newfound hopes of change,” Birahi said. “But the truth is neither our leaders nor their ideologies and mindsets have changed.”

Apart from promoting human rights, Amnesty International is also shifting its focus to campaign save environment and climate change. As global climate changes, the rights body believes that weather-related disasters will ruin people’s ability to earn a decent living. It fears that climate change could lead to mass migration and conflicts over natural resources. “Climate change will exacerbate well-known causes of war, such as competition over natural resources…this will increase the risk of violent conflict in the future,” a press release read.

In turn, Amnesty believes that governments must work together to reduce carbon emissions and phase out subsidies for fossil fuels.

"Eco justice is important for a country like Nepal because we are the least contributing country. However, we bear the worst brunt of climate change. This is fundamentally a question of justice and accountability which the industrialized world has to answer in terms of green house gas emission," Thapaliya said.

KATHMANDU, June 14: Nepal’s politicians must set aside their differences and take decisive action in the coming weeks to save... Read More...

NMA to provide relief to 3,000 tourism workers
8 hours ago