'Right time for investment in Nepal' 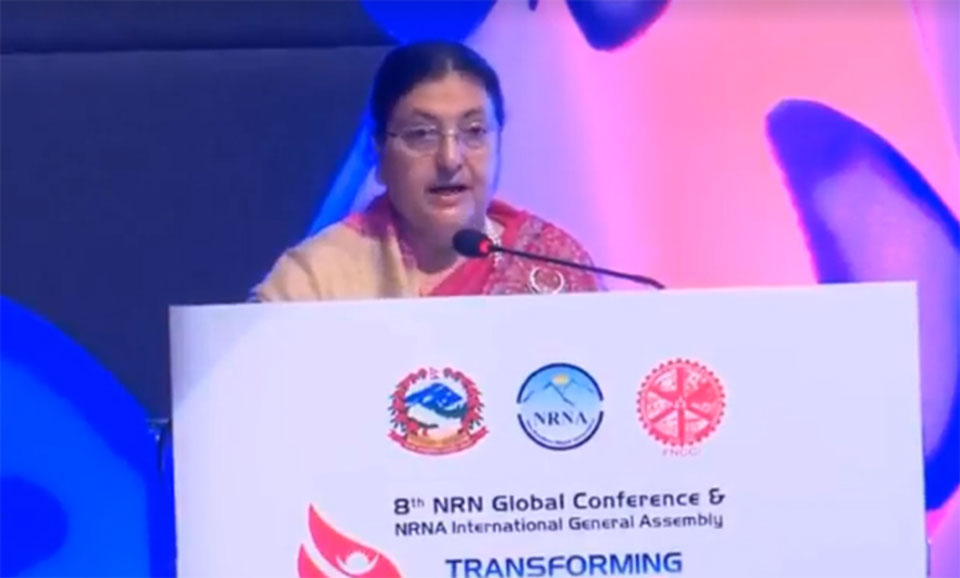 KATHMANDU, Oct 14: President Bidya Devi Bhandari has urged the non-resident Nepalis to invest in their motherland.

Inaugurating the 8th international convention of the Non-Resident Nepalis Association (NRNA) here today, she said the time was ripe to invest in Nepal. "Following the promulgation of the constitution, Nepal is entering a phase of economic development, and NRNA should be a part of it," President Bhandari said. "There is favourable atmosphere for investment in tourism, hydropower, education, health and infrastructure in Nepal."

Stating that Nepalis abroad can take pride in Nepal's prosperity, the President also lauded the role played by the NRNA in the post-earthquake and landslide relief, rescue and reconstruction work in the country.

On the occasion, Deputy Prime Minister Krishna Bahadur Mahara said a special role of NRNA was expected in the development of Nepal. "The knowledge, skills and capital gained abroad should serve as energy for Nepal's development."

President of Federation of Nepalese Chambers of Commerce and Industry Bhawani Rana, founder President of NRNA Dr Upendra Mahato and NRNA chair Shesh Ghale expressed the commitment to contribute from their respective part in the development of the nation.

The NRNA brings together around 70,000 Nepalis living in 77 different countries around the world. The convention will elect a new leadership for the Association.

Bhuvan Bhatta, Jamuna Gurung and TB Karki are in the fray for the post of president in the convention that will end on October 17.(RSS)

Paribesh Koirala is the co-founder of The White Rabbit Studio, a software developing company established in 2013. ... Read More...