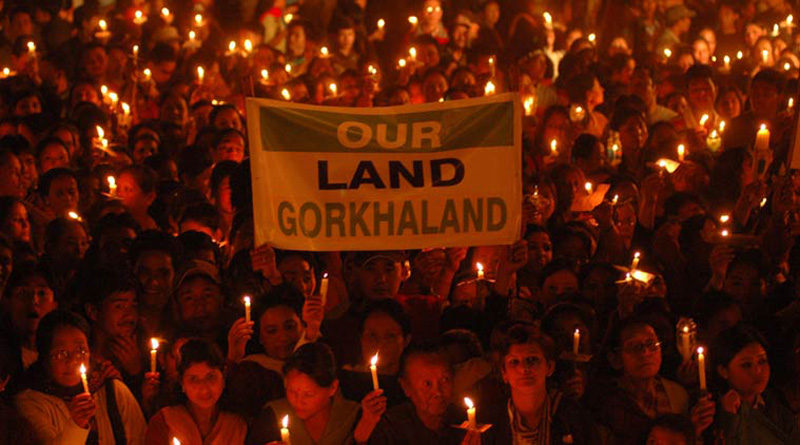 Historically, Darjeeling was not a part of Bengal. It was leased by the British from Sikkim in 1835
Even though Nepali has been recognized as one of the official languages of India since 1992, the Mamata Banerjee-led government in West Bengal provoked the Gorkha Janamukti Morcha (GJM) by declaring that Bengali would be a compulsory subject in school in Darjeeling hills, home to more than a million Nepali-speaking Gorkhas. After GJM intensified its agitation against the imposition of Bengali language, chief minister Banerjee clarified that Bengali will be an optional subject in the Hills. But the GJM refused to relent, scaling up the agitation and reviving the age-old demand for a separate Gorkhaland state.

Leader of GJM Bimal Gurung has urged people in Darjeeling hills to prepare for the final battle as he believes time has come for a ‘do or die’ fight to achieve the dream of Gorkhaland. Since June 8 GJM has been enforcing an indefinite shutdown. Gorkhaland is no more limited to political rhetoric but has become a passion which cuts across religious and political lines. Even more disturbing for Banerjee is the fact that a section of leaders of her own Trinamool Congress (TMC) is backing the ongoing agitation for Gorkhaland state.

The demand for separate administrative unit in Darjeeling dates back to 1907, when the then Hillmen’s Association submitted a memorandum to this effect to the then Bengal government under the British colonial rule. The demand was even raised in the Indian Constituent Assembly by Ari Bahadur Gurung, a barrister from Kalimpong, while India was writing its constitution after its independence from the British.

This was followed by a violent revolt in 1986, this time led by Subash Ghising of Gorkha National Liberation Front (GNLF), which revived the demand for a separate state. He also coined the term Gorkhaland. In the violent agitation that followed over 1,200 people were killed. The then chief minister of West Bengal Jyoti Basu finally relented and agreed to set up the Darjeeling Gorkha Hill Council (DGHC).

Again, in 2007, the demand for Gorkhaland was raised by Bimal Gurung’s GJM. Gurung, who once worked as a foot soldier for Subash Ghising, rose to fame after his tireless campaign to make Prashant Tamang winner of an Indian TV reality show. After an agitation of about two years, the GJM also agreed to set up another autonomous body called the Gorkhaland Territorial Administration (GTA). But lately chief minister Banerjee is accused of trying to wreck the GTA by not transferring power to it and by forming as many as 15 development boards of hill communities such as Tamang and Lepchas, in the process trying to establish a parallel power center.

Recently she even divided Darjeeling district, creating a separate Kalimpong district, which shows she is determined to diffuse the century-old demand for Gorkhaland through her divide and rule strategy. Her party Trinamool Congress even managed to win municipality elections in Mirik, a stronghold of GJM. Against this backdrop GJM now says that time for autonomy, GTA, DGHC is over and fight will not stop until the demand for Gorkhaland is fulfilled.

Historically, Darjeeling was not a part of Bengal. It was leased by the British from the kingdom of Sikkim in 1835, to make it the summer capital of India, since the then national capital of Kolkata was hot and humid in summer. Darjeeling, which covers 3,150 square km and has a population of 1.8 million, has its own distinct features to be a separate state. Gorkhaland has been proposed on the basis of linguistic and cultural differences with the Bengali culture. Even though the schedule of the Indian constitution lists 22 recognized languages, it is notable that Nepali and Bodo language groups don’t have provinces of their own. When the majority of Indian states are carved on the basis of language people of Darjeeling have the right to ask for Gorkhaland. But state and central governments continue to turn a deaf ear to the legitimate demand for Gorkhaland.

With negligible presence in West Bengal, the Bharatiya Janata Party (BJP) had depended entirely on the GJM to win the Darjeeling Loksabha seat in 2014, promising to lay the ground for Gorkhaland once it succeed in making the government at the center. But as agitation in Darjeeling gets violent due to police atrocities, the central government led by BJP has done nothing to diffuse the tension.

The Nepali-speaking people of Darjeeling hills have for long been viewed as migrants from Nepal and as “foreigners” even though their history in the area long predates independent India. Indian Gorkhas don’t need any certificate to prove their Indian nationality, as history is a witness that whenever there is war against India, they are the first to fight back .Therefore, now is the time to honor the century-old sacrifice of Indian Gorkhas in nation building and grant their demand for a separate Gorkhaland.

The most basic thing you can control while applying makeup to make sure you don’t look like a clown when... Read More...