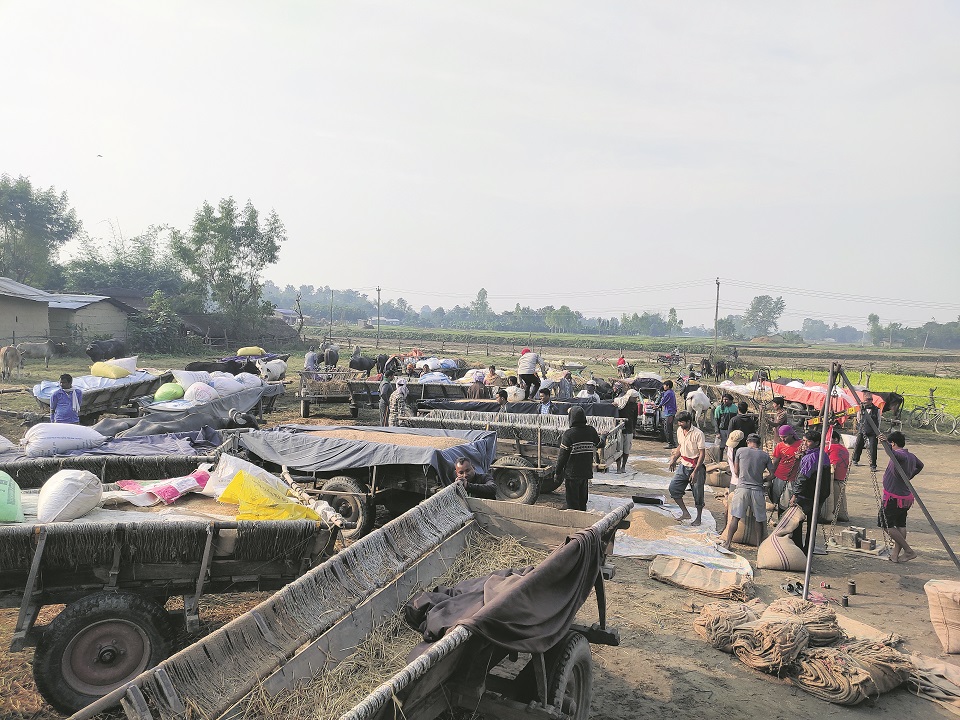 TIKAPUR, Nov 19: Aadhunik Chamal Karkhana of Rajapur in Bardiya district has started buying paddy from Tikapur of adjoining Kailali district. The rice mill was not able to find required quantity of paddy locally.

The mill has established a paddy purchase center at Sati, Tikapur-7 of Kailali, which came into operation from November 14. According to Rebant Rawal, manager of the mill, 1,500 quintals of paddy has been purchased from the Sati center till November 17. He has expected that at least 15,000 quintals will be sold at Sati.

The Food Management and Trading Company (FMTC) had initiated to buy paddy from the neighboring district to operate the mill despite shortage in the district. Rice mills in Rajapur area have been unable to meet their target of paddy purchase since last year. According to Rawal, the target was to purchase 40,000 quintals of paddy, but only 300 quintals were purchased. This year, the rice mill has targeted to purchase 45,000 quintals, of which they have purchased only 200 quintals in Rajapur.

“We are trying to meet our target,” Rawal said, “But looking at the condition, there is little chance for that.”

The rice mill was established in 1988 and it had good production until few years after establishment. Rice production started dwindling due to armed conflict in the country. The rebel Maoists even bombed the mill. After the beginning of peace process in the country, the mill gradually came back to normalcy. But the shortage of paddy from last 2-3 years seems to hit the mill again.

According to a survey, 80% farmers of Rajapur area use paddy of Makwanpur species. The government has classified Makwanpur as thick paddy species, and has fixed its price at Rs 2,532.80 per quintal. Farmers want an increase in this rate, to be made minimum Rs 2,700 per quintal.

FARMERS HAPPY DUE TO TIMELY PURCHASE
Farmers are happy with the government as it started purchasing paddy from November 14, which they say is an appropriate time. The purchase started only in December last year. Sher Bahadur Bista, a farmer from Baidi, Tikapur Municipality-9, said he was satisfied due to the timely purchase despite not getting the desired price.  “This year it was very convenient,” he said, “Every year, if we could sell rice on time, it would be really helpful for us farmers.”

TIKAPUR, March 11: There were days when rice milled in Kailali district used to reach all over the country as well... Read More...

MUGU, August 29: Around 100 sacks of rice supplied by Nepal Food Corporation (NFC) to locals of Humal have been... Read More...