(In the combo photo to the left) National Sports Council (NSC) Member Secretary Ramesh Silwal bats as newly elected Cricket Association of Nepal (CAN) President Chatur Bahadur Chand bowls to inaugurate the Women’s Champions League (WCL) at the TU Cricket Ground in Kirtipur on Wednesday. (In the photo to the right) Santoshi Chaudhary of Chitwan Rhinos receives player-of-the-match award at the end of the WCL match against Kat Queens Kathmandu. Photo: Republica

KATHMANDU, Oct 17: Player of the match SantoshiChaudhari registered a three-wicket-haul to propel Chitwan Rhinos to a five-wicket win against Kat Queens Kathmandu during the opening match of the Women’s Champions League (WCL) held at TU Cricket Ground, Kirtipur in Kathmandu on Wednesday.

The WCL entered record books to be Nepal and Asia’s first ever women’s franchise based T20 cricket league. The Women’s Big Bash League (Australia) and English Super League (England) are two others women cricket league in the world.

After racing to 40 runs for no loss in the powerplay, Kat Queens went on to lose 10 wickets adding next 52 runs. RashmiChaulagain top-scored with 34 runs for the Kat Queens who were invited to bat first after Rhinos won the toss and elected to bowl first. Chaulagain smashed seven boundaries during her 25-ball stay.SaraswatiKumari with 15 runs off 26 deliveries was the only other double-digit scorer of the innings. Sobha Ale and Roma Thapa added nine runs each.

RekhaRawal and KabitaGautam shared two wickets each whereas RituKanojiyachipped in with a wicket to bundle out Kat Queens for 92 runs in exactly 20 overs.

Later, SumanKhatiwada and PyariChaudhari scored 29 and unbeaten 24 runs respectively to help Rhinos complete the chase in 18.3 overs for the loss of five wickets. Khatiwada smashed four boundaries during her 23-ball stay whereas Chaudhari registered three boundaries during her 27-ball stay. Similarly, RituKanojiya and Kajal Shrestha contributed 14 and 11 runs respectively during the successful chase.

IshworiBist was the best bowler for Kat Queens picking up two wickets during her four over spell conceding 15 runs off it. Likewise, SangitaRai, Laxmi Saud and SaraswatiKumari chipped with a wicket each.

Kat Queens will face PokharaPaltan in the first match on Thursday whereas Lalitpur Falcons and Biratnagar Titans will make their first foray in the tournament the second match.

The winner of the group stage will directly qualify for the final match whereas the first and second runners-up will face each other in an eliminator scheduled for October 22 to decide the second finalist.

The final will be played on October 24.

Queen’s Event is also the organizer of Pokhara Premier League. 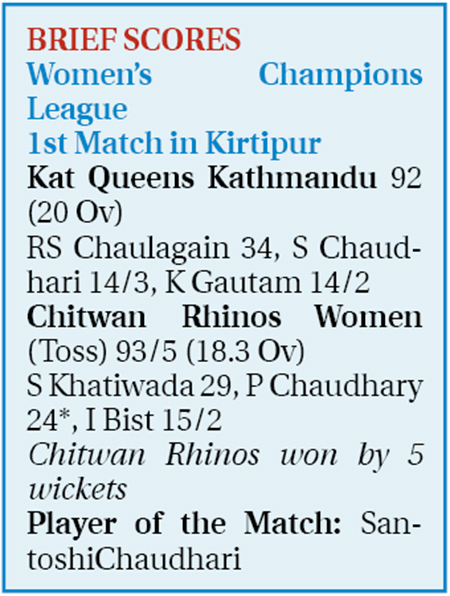 KATHMANDU, May 11: A total of 107 players have registered for the upcoming Women’s Champions League (WCL), Nepal’s second women’s... Read More...