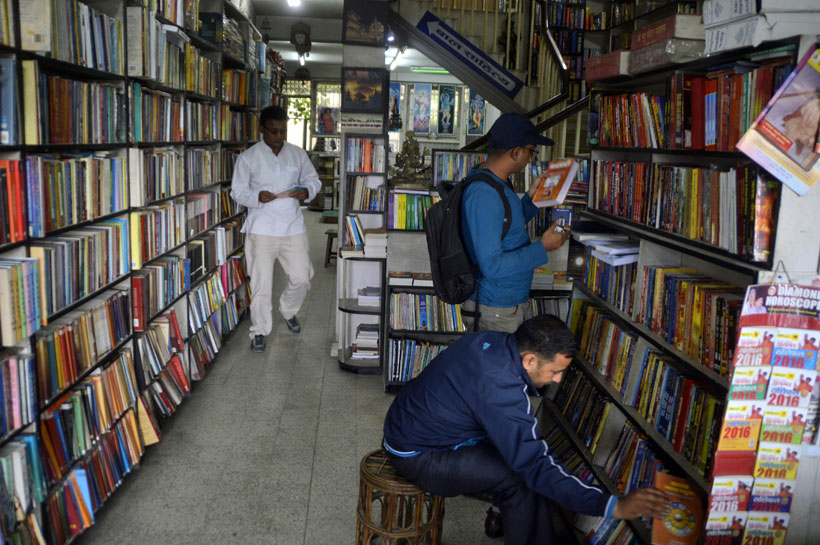 Sanskrit may have long been considered a dead language, but of late, there is undeniably more interest around the matter. Not only do we have international writers debating over the language, some private schools in the capital are reintroducing Sanskrit classes to their syllabuses. So The Week caught up with some individuals involved in various aspects of teaching, writing and publishing in Sanskrit to find out what the current situation is like. They share their experiences and opinions on the state of the Nepali public’s interest in the language. Further, just in case you are interested in exploring Sanskrit yourself, we also present to you a list of books that might prove to be a good start.

The intention of our Sanskrit classes is to help spread knowledge. It’s got nothing to do with the pass and fail marks. There was definitely a need to apply this new approach of teaching the subject. The rigid method had previously made Sanskrit unpopular so this year while adding the weekly Sanskrit periods for students of fifth, sixth and seventh grades we were very mindful about reducing the pressure. So now even though they do have to sit for exams, the test rounds up to a total of 15 marks.

The Sanskrit classes are like any other extracurricular periods, it’s fun and informative at the same time.

I believe that there is a lot of value that we can get from learning the subject. Learning Sanskrit can unlock a treasure trove of knowledge, literature works, sound advices, and moral stories that have been passed down by some of the most brilliant minds that have walked this earth. At a time when our younger generation is rapidly losing touch with our traditions, teaching Sanskrit might just help them reconnect with our roots. That’s the main reason behind the school’s decision, but personally, I believe it can actually give students more than just lessons of our culture and heritage. I believe it will also help guide their morals and values. The stories in Sanskrit can really help reinforce the importance of respect and an honest character. So cancelling Sanskrit classes in between might have actually cost a generation. Nevertheless, we once again have a chance to open the door of opportunity for the younger students. I believe we should seize it.

Publishing works in Sanskrit is still very difficult in Nepal. I have many works written in Hindi, Nepali and Sanskrit but whenever, I have to print books of the latter, I have to get it done from India. I still don’t have much choice here because many publishing houses aren’t willing to comply. Similarly, in my opinion, the work isn’t of good quality. So far, like most Sanskrit writers, I too get my books published from Banaras. The readership is also comparatively higher in India than in Nepal. Even though I have managed to sell 1000 copies of my Sanskrit books in the last two years right here in the country, I hear that they are mostly popular among foreigners.

This lack of interest in Sanskrit among the Nepali populace is very palpable in the seminars and sessions that I have hosted as well. Just a couple of months ago, I had a summer session in Kathmandu University and I had just one Nepali student among a dozen of foreigners. Unfortunately, I feel the priority of Nepali youths and even their parents at the moment is to somehow go abroad and make a living there. The majority couldn’t be least bothered with exploring Sanskrit, which is a shame because I’m frequently flying to different countries to give lectures and hold sessions on the subject. In fact, I recently returned from Europe where I was called upon to speak about the language and its importance. It seems the west has caught upon the significance of Sanskrit before we have. It’s never too late and reintroducing Sanskrit in schools may help change the game.

Ramesh Joshi
Ratna Pustak Bhandar, Maitighar
It is tricky to find Sanskrit books in our country. It’s the reason I wanted to start the collection. It’s already 15 plus years now that we began looking for and adding different works in Sanskrit or related to Sanskrit here at our bookstore. We have more than 6,000 books and mainly it is divided into two different sections, Ayurdeva and literature. We may not have vigorous sales but I don’t mind. For me, Sanskrit as a language is truly fascinating. This is where it all began. We have people who are interested in yoga, medicines, tantric practices, religion and I can earnestly point them all to the Sanskrit section because it holds information about all these subjects and more. Sanskrit is where it all began. It’s a shame that there aren’t many people who read or understand the language these days. However, I have found that those who want to really to explore these topics in depth, do make the effort. They too have realized the incredible significance of works that are in Sanskrit.

Of late there has been a bit of resurgence in the popularity of Sanskrit. There are more Nepalis in their late 20s and 30s who come around to explore the section. This wasn’t the case a decade ago. They may not form the majority, but the interest has grown and it is nice to see that. In a way, Sanskrit books always had a market. We need them to perform various rituals and pujas but now there is scope for the market to expand. These days we can get Sanskrit translation works in English, beginners guide books in English and Nepali. So, there is a lot of hope.

The Sanskrit Language: An Overview
By P.S. Filliozat

This book has the rare distinction of being both an introductory book and a new ground-breaking study. It is an introductory book because the reader gets an accurate overview of the language, and it is also a new ground breaking study because Filliozat’s approach harmonizes two different and complementary stands that often have been at war: The Western Historical and comparative approach and the indigenous Pandita tradition.

The Stories of Krishna, edited
by Warwick Jessup and Elena Jessup

This has been classified as a Sanskrit course book for beginners. Schools and college have been known to use them for their classes as well. The Stories of Krishna is actually part of a series which includes seven another tales including those of Ram and Buddha as well. The course book is supported by appropriate illustrations as well so as to make them more appealing for young learners.

Theater of Memory: The Plays of Kalidasa
by Miller Barbara

This volume offers comprehensive analyses and new translation of Kalidasa’s three extant plays.  Kalidasa, the classical Sanskrit writer, is still widely regarded as the greatest poet and dramatist in the Sanskrit language so it automatically makes this book an important read. Further, the translation works in this book have also garnered good reviews for being excitingly imaginative.

Some Aspects of Sanskrit Literature and Literary Criticism
by Natavar Joshi

The present work is a collection of 22 articles. Most of them were presented as papers at national and international seminars and conferences and appreciated by scholars as well as deemed important enough to be published in reputed research journals. The article collection explores topics from Sanskrit literature, Vedic poetry, linguistics to creative processes and culture in general.

If you were to look up the meaning of “guru” in Sanskrit, it means “the one who dispels darkness and... Read More...

From education minister to education secretary to educationists to teachers, no one wants to enroll their children in public schools... Read More...