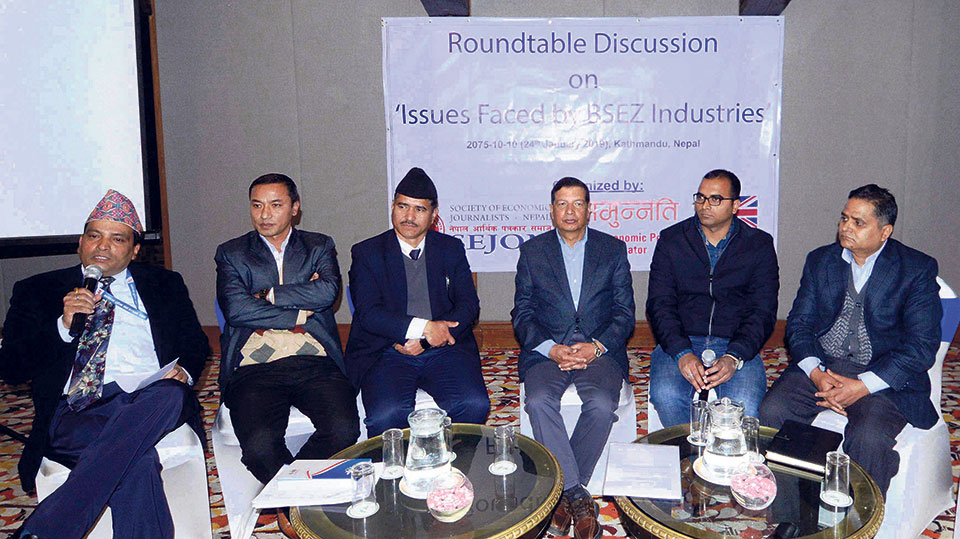 KATHMANDU, Jan 25: Industrialists are upbeat with the government’s preparation to make an amendment to Special Economic Zone (SEZ) Act to encourage investors for putting their money to set up export-oriented industries in SEZs.

Speaking at a round table entitled ‘Problems faced by industries in Bhairahawa SEZ’, organized jointly by Economic Policy Incubator and Society of Economic Journalists of Nepal in Kathmandu on Thursday, they said that the government’s decision to reduce the mandatory export provision for industries in SEZ to 60 percent from existing 75 percent would encourage private sector toward investing in SEZ.

The government has already tabled the amendment bill in parliament.

“The new SEZ Bill has addressed some of the key issues raised by the investors. However, it is crucial that government implements the law properly through enhanced cooperation among its agencies,” Shankar Sharma, former vice-chairperson of the National Planning Commission (NPC), said.

“The SEZ Act is being amended with a view to boost the morale of investors inside SEZ. If necessary, we can be further flexible in export provision for such industries in the future,” Chandika Bhatta, executive director of SEZ Authority Nepal, said, adding that the new SEZ Bill also incorporates a provision whereby industries inside SEZ get all assured tax waiver facilities under the recommendation of SEZ Authority itself.

Hara Raj Neupane, deputy managing director of the Nepal Electricity Authority (NEA), assured that the authority was serious about providing necessary power supply to the industrial sector, including the Bhairahawa SEZ.

Former Commerce Secretary Purshottam Ojha said that the government should focus on implementing the one stop service center to avoid unnecessary hassles for industries.

KATHMANDU, Mar 5: Industry, Commerce, Labor and Consumers Welfare Committee under the House of Representatives, has agreed for representation of... Read More...