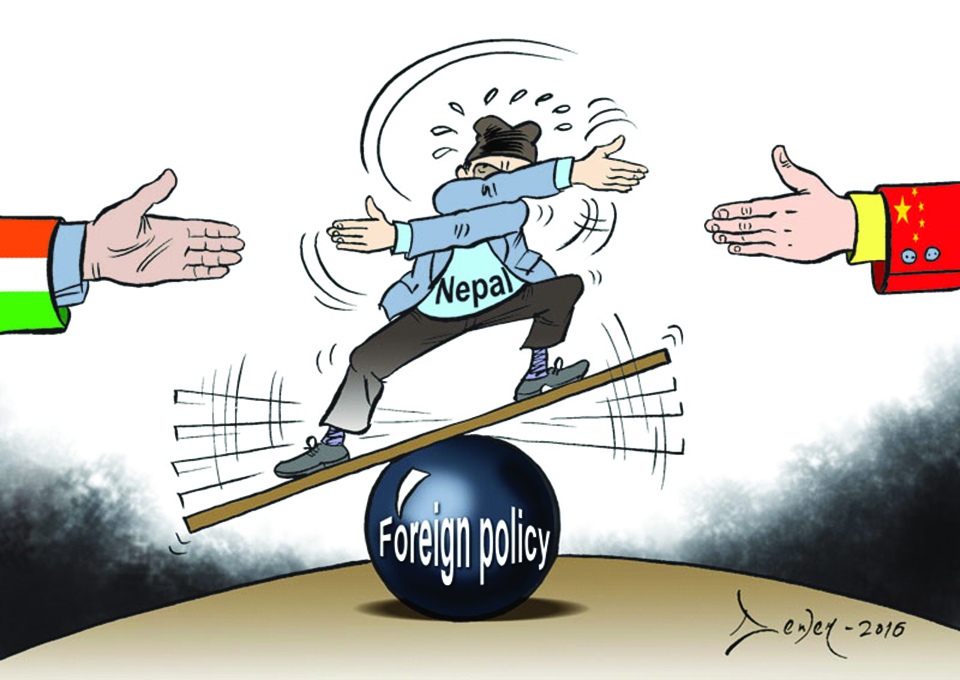 The author has a post-graduate degree from KDI School of Public Policy and Management, South Korea
rebantakc@yahoo.com

Though foreign policy is a fundamental instrument for developing and managing multidimensional international relations for defending national sovereignty, territorial integrity and national independence and enhancing national dignity and advancing socio-economic development, Nepal has not been able to devise a proactive, broad-based, workable and farsighted foreign policy with specific guidelines and clear national priorities.

Past governments have given much importance to revitalizing national diplomacy after the restoration of democracy in 1990. This reflects in a number of high-level foreign policy task forces and committees formed with the mandate of submitting pertinent, proactive and workable policy recommendations.

Civil Service Act, which governs Nepal’s public administration to ensure effective implementation of government’s policies and programs, envisions Foreign Service as a separate administration group by considering specific nature of job, professionalism, importance and gravity for overall national wellbeing. Public Service Commission also holds a separate Foreign Service examination to select and recruit required manpower to administer, govern and conduct foreign affairs. But a pro-active, broad-based and long-term foreign policy with specific guidelines and clear national priorities has not been devised though we have a provision enshrined in the constitution regarding Nepal’s international conduct.

Nepal has entered a new era now. We have a constitution promulgated by the people’s chosen representatives. This has institutionalized federalism. Three levels—local, provincial and federal parliament—of elections have been held and governments have been formed in all levels. This has brought a new ray of hope for durable political stability for creating an environment conducive for socio-economic transformation. We have been appealing for foreign investors to invest in Nepal.

With large portion of physically and mentally active young and energetic population, well-developed banking and financial institutions, investment-friendly policy and institutions, our strategic location between two economic giants India and China, preferential treatment we are receiving as a least developed country (LDC) under World Trade Organization provisions, we are at the competitive position to augment national socio-economic development process by attracting huge foreign capital investment, advanced technology and modern management skills and knowledge.

To achieve this, we must have a sound diplomatic dealing in our multiple external engagements. At the contemporary globalized world where nation-states are vigorously pursuing policy of benefitting from external engagement to fulfill their national economic agendas, traditional way of diplomatic dealing and old practice of administering, governing, managing and conducting Nepal’s external affairs won’t work.

We need to be able to employ national diplomacy for defending national sovereignty, territorial integrity and national independence and garnering bilateral, regional and multilateral assistance for fulfillment of annual national budgetary expenses. This will further contribute in establishing sustainable peace and stability and thereby making a peaceful, prosperous and modern Nepal. It will also help us address people’s aspirations for development and prosperity.

Nepal has formal bilateral relations with 158 countries and is a member of regional and international institutions like the United Nations, World Bank, International Monetary Front, World Trade Organization, SAARC, Belt and Road Initiative and BIMSTEC. We have 36 diplomatic missions stationed at different parts of the world.

In this context, a specific foreign policy guideline with clear national priorities is needed for deepening, consolidating and strengthening diplomatic relations with these countries and regional and international organizations.

Thus the government of K P Sharma Oli should devise a farsighted foreign policy with specific policy guidelines and clear national priorities backed by vibrant institutional mechanism and competent diplomats so that we can attain broader national interests by effectively mobilizing our diplomatic apparatus and national representatives.

Having done that, promoting and enhancing national economic interest should be a top priority in Nepal’s multiple external engagements which ultimately contribute to creating peaceful, prosperous, inclusive and just Nepal. We will then be able to achieve the goal of graduating from LDC status by 2022 and then graduating from low-income status by 2030.

The author has post-graduate degree from KDI School of Public Policy and Management, South Korea

As Nepal has adopted a federal system of government, the country needs to redefine its foreign policy according to the... Read More...