One year of Int'l Conference for Nepal’s Reconstruction 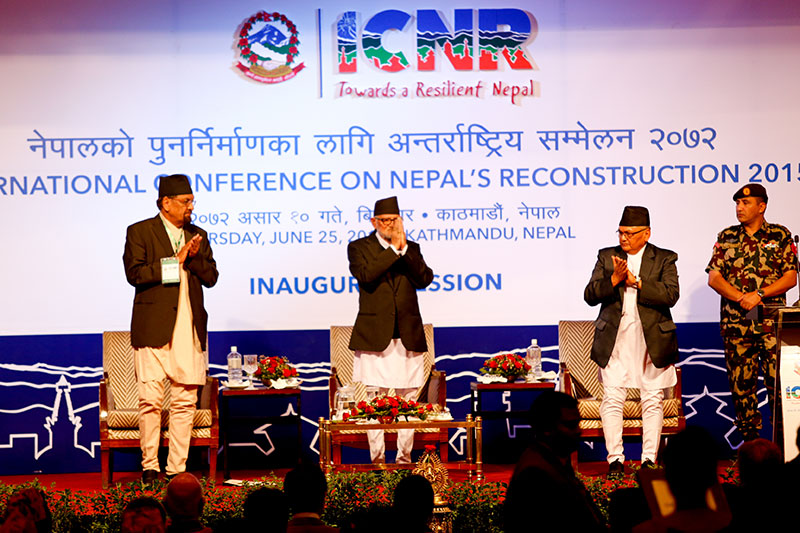 Exactly one year ago on this day, we successfully held the International Conference for Nepal’s Reconstruction (ICNR), two months after the devastating earthquake of April 25, 2015. At a time when Kathmandu was still rocked by aftershocks, it was an uncommon feat for Nepal to invite and host an unusually distinguished body of dignitaries, including the Foreign Ministers of China and India, and tens of other high representatives. The manner in which our allies and development partners helped us at a time of grave need was breathtaking in its generosity and empathy.

While the Post-Disaster Needs Assessment (PDNA) prepared by the National Planning Commission pegged immediate recovery needs at US$6.7 billion, the public sector component was costed at about US$4 billion. The conference pledged that it would meet 100 percent of this request, a rare achievement in the field of humanitarian assistance worldwide. This was a result, of course, of the goodwill that the international community has for the people of Nepal, but it was also an acknowledgement of the rigor and professionalism in which post-disaster assessment and planning had been conducted within weeks, particularly in the form of a credible PDNA and a careful institutional design of the National Reconstruction Authority (NRA).

Tragic though it was, reconstruction was also poised to support a larger narrative of transformative development through capital formation, as pursued by the previous government. This included, for instance, a power trade agreement with India to unlock the potential of large hydro-electric projects, facilitate foreign direct investment in the cement industry, and build expressways to boost connectivity. “Building Back Better” after the earthquake was as much about sustaining improved livelihoods and triggering growth as it was about instilling hope and optimism among Nepalis, especially the youth that continue to flee the country on an epic scale.

A lot of the early excitement of leveraging reconstruction as an opportunity to re-imagine what Nepalis can be and do has now dimmed. The positive momentum perhaps peaked last summer at about the tenth week after the earthquake. Then, as with much else in Nepal, politics intervened with a thud and it has since been a disappointing run of events, with hundreds of thousands of victims still unaided and without decent shelter.

The belatedly appointed new CEO of the Reconstruction Authority in August 2015 was able to serve for only two weeks when a stunning lack of coordination between the executive and the legislature, possibly a result of pre-meditated foul play, led to the expiry of the presidential ordinance that had created the NRA. Even in the short two-week tenure, the CEO (co-author of this article) began staffing the Authority, completed the drafting of the Reconstruction Policy, approved building drawings, and established a rapport with leading development partners on immediate steps.

As the parties switched their attention to rushing through the promulgation of a new republican constitution in September 2015, post-quake efforts suffered collateral damage. Kuntoro Mangkusubroto, the head of the reconstruction of Aceh in Indonesia after the 2004 tsunami presciently warned us when he visited Nepal last year that the three enemies of reconstruction were politics, bureaucracy and corruption. We in Nepal are unwittingly falling into these exact traps.

The current prime minister expected to come to power soon after the constitution was issued, and his party used the ‘accident’ of the lapse of the NRA ordinance to play politics. If he wished to replace the new CEO with someone loyal to his party after he had come to power, he had that right. However, it was wrong to hold the NRA hostage to a future design of rent extraction and to push it into hibernation for four months. This period could have been used to complete additional guidelines and finalize procedures. The post-constitutional fall-out, especially the trade blockade, could not have been an adequate cover for non-action on desk-based tasks.

The government erred in not prioritizing adequate staffing of NRA. It has taken months for officers to be seconded, and many have openly defied the government’s instructions. The politicization of the bureaucracy has weakened state authority to such a degree that it is now the tail that wags the dog. The irony here is that the majority of the civil servants are affiliated with the ruling party. There are also fears that the NRA is being used as recruiting ground for the faithful, including those who are active members of intra-party ‘professional’ departments and allied NGOs.

Of the major challenges in reconstruction, a few that stand out are to do with the mobilization and management of human resource, coordination among state and non-state actors, logistics of financial disbursements and material procurement, and the implementation of norms, codes, standards and related mandatory policies. The NRA has tried its best and must be given some credit for its intentions. But ultimately this is about competence, and the government remains ill-equipped to manage these challenges in a pragmatic way. For example, to disburse the all-important first instalment of the cash grant, human resources could have been mobilized innovatively with security personnel in tow. This would have deterred fake claimants. Bank accounts could have been mandatory for the subsequent tranches with names cross-checked against existing databases kept by the District Disaster Relief Committees. Coordination offices should have been set up from the get go in each electoral constituency.
The supply of construction materials needs to be well managed to avoid price distortions. Local chapters of business apex bodies like CNI and FNCCI would have been great allies. The real estate companies could still be mobilized to help develop planned settlements in the populous market centers and peri-urban areas. Grants could be issued indirectly through them as this approach would have particularly suited Nepali migrants abroad to match scheduled payment obligations with periodic remittances. This would have been one way to crowd-in the private sector, but the ideological blinkers of the government appear to have undermined this potential.

Given the large need for construction materials, specific incentives could have tempted private firms from relocating to areas of need and to improve the supply chain network. Backward linkages could then have been forged with local production. This is also the right time to transfer new technologies and expand businesses in construction material industries. Innovative financing and entrepreneurial capacity building initiatives with business feasibility studies could be carried out in affected villages to motivate local people to tie up with productive endeavors.

Reconstruction is multi-dimensional. It is not just about restoring subsistence or resurrecting fallen homes. It is about nurturing the capacities of institutions, building integrated settlements and interconnected rural centers of growth, using environmental resources sustainably and expanding innovative financing. Banks should be encouraged to fund SME projects that boost local production and make villages economically vibrant in niche agriculture and tourism, for instance. The government needs to provide technical assistance to build capacity, and nudge non-governmental allies towards socio-economic reconstruction.

Jobs-oriented skills training with a special focus on women and marginalised communities must be a core goal of reconstruction. Cash for work labour-intensive programs could rebuild public and private assets and provide immediate relief. Indeed, self-employed people serve the country in three ways: they do not become a burden on the government for handouts; they, in turn, could employ others; and they may very well pay taxes.
Finally, reconstruction of heritage sites needs a distinctly innovative approach that departs from the normal rules of procurement and contracting. This could be given cabinet guarantees to dissuade risk aversion on the part of bureaucrats.  We conclude on this note by urging the government to open itself to greater innovation and a wider breadth of ideas, regardless of origin. A lot has already been lost and missed in a botched reconstruction trajectory, but in the longer scheme of things in a nation’s life, slivers of initial optimism can still be reclaimed.

Pokharel is a former Vice
Chairman and Waglé a former Member of the National Planning Commission.

GORKHA, Nov 11: Renovation work of the quake-ravaged Manakamana Temple, a popular pilgrim site of Gorkha district, has been delayed by... Read More...

PM directs not to hike medical education fee
16 hours ago

Why Trump is necessary
4 hours ago

One of 22 workers trapped in China gold mine rescued
1 hour ago
Malaysia detains 16 Vietnamese fishermen, two boats for trespassing
1 hour ago