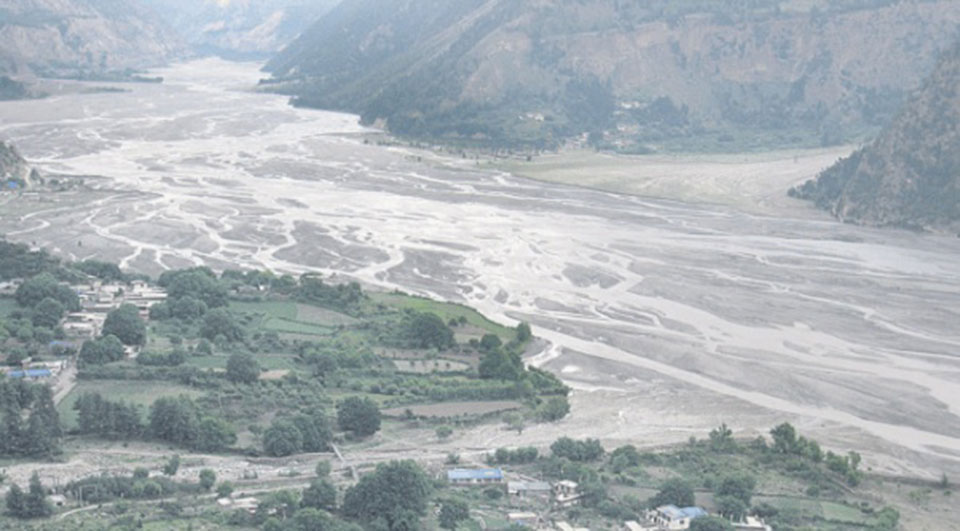 POKHARA/MUSTANG, Jan 24: The debris of caved land accompanied by broken trees temporarily blocked the flow of the Kaligandaki River in Mustang on Wednesday. However, the river has returned to its natural flow after a short halt.

The land near Gharpajhong Rural Municipality-1, Chairo and Marpha village had caved in. This area is around 30 meters above the river level, according to Deputy Superintendent (DSP) Mahendra Khadka of Mustang. "Fortunately, the debris could not block the river for more than half an hour as it was in a wide space," said DSP Khadka.

According to Ash Bahadur Thakali, Chairperson of Gharpajhong-1 the river was blocked on Wednesday morning. "On monsoon, a huge mass of land was eroded by the torrential rainfall. The same chunk of land caved in and fell into the river," said Thakali.

A team of army, Armed Police Force and Nepal Police reached the site after hearing about the blockage. The debris was cleared by using excavator. "Last year, flood and landslide triggered by monsoon rain washed away the arable land of locals in Chairo. But this year it happened in the winter," said Thakali, adding," This has terrorized the locals."

Locals were deprived of irrigation facility for four months as the irrigation canal was washed away by the flood. A month ago, rural municipality provided around 300-meter long irrigation pipe to villagers so that they can resume the irrigation to their fields. "People had just started irrigating and the land caved in due to heavy snowfall," said Thakali

PARBAT, July 7: The bodies of the 20 people who died in a road accident in Mustang on Friday have... Read More...

KATHMANDU, May 15: Nepali Congress has won the post of chairman in the Lomanthang rural municipality as Subarna Bista has... Read More...