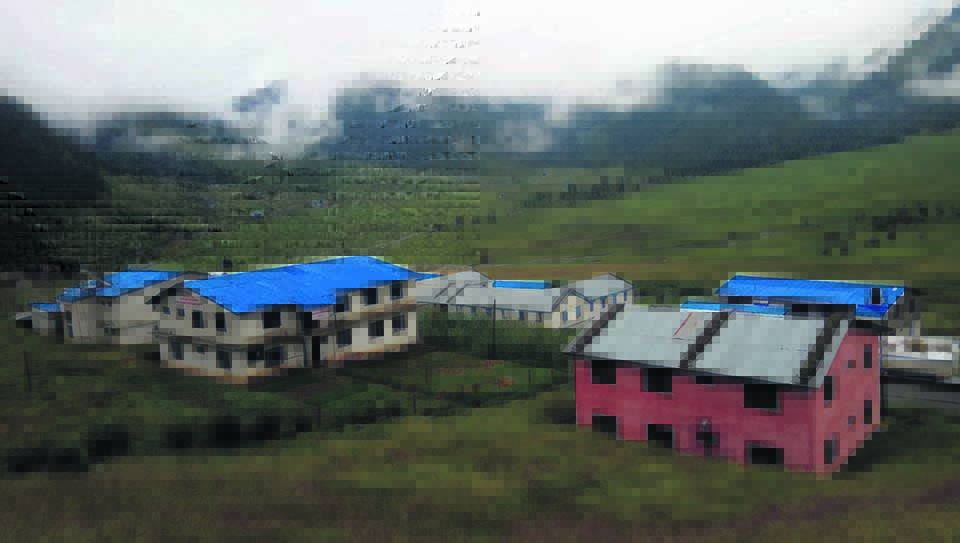 The Mountain Agricultural Research Insitute in Guthichaur, Jumla in this recent picture

JUMLA, Sept 4: Jumla locals were very much happy with the establishment of Mountain Agricultural Research Institute there seven years ago. They expected the institute would assist them in increasing agricultural productivity. However, in lack of required human resource, it has turned almost defunct.

“The sole objective for establishing the institute was to improve the lifestyle of people leaving in the mountain region by assisting them to increase agricultural productivity,” said Tirtha Raj Rijal, the director of the institute. “Though formally started in 2014, it has simply not been able to meet the expectations,” he admitted.

Though the locals considered that the institute would improve their agricultural practices, it was actually established with a mandate to improve agriculture in hilly districts from Ilam in the east to Darchula in the west.

It is the institute’s responsibility to monitor the functioning and shortcomings of all these research centers. It is responsible for supplying resources to all these centers across the country and also for introducing new technology to them.

“The institute is the authority on agriculture for regions located above 2400 meters from the sea level. It has all power to intervene, take due actions when necessary,” said Rijal.

“We don’t have enough number of staffs and officials to deliver the desired service. We are running in such a sorry state for a long time now,” he added.

Rijal further mentioned of NGOs and INGOs stating that the institute should have been efficient to coordinate with such bodies too for satisfactory results. “We were supposed to promote modern technologies, provide necessary training to farmers, and equip them with tools to increase productivity. Along with that, the institute is also supposed to introduce improved storage methods and help farmers in improved distribution of their produces. There is a huge list of responsibilities that this institute has to fulfill,” he said.

“To fulfill these responsibilities,  we are supposed to work closely with government and non-government bodies that are working in the agriculture sector. We are sorry to say that the institute is not up to the mark,” he added.

According to a scientist with the institute, Basanta Chalise, the institute is expected to coordinate with all stakeholders and develop new technologies by itself. But it has gone so dysfunctional that it cannot train even an ordinary farmer right now.

“Let alone play the role of a coordinator, the institute lacks the capacity even to train a farmer. There are too many vacant posts,” he remarked.

There are a total of 18 posts at the institute, including that of six senior scientists in the institute. But presently, only nine positions are filled. “We don’t have an accountant, the necessary number of office peons,” lamented Rijal. “We have only two senior scientists, whereas there is a quota for six.”
Rijal blames the government for the vacancy. Until and unless the government takes the institute seriously, it won’t be able to fulfill its responsibility, he noted.

“Though it was established with a great goal, the government’s apathy has left it powerless,” Chalise said. “Presently, we are just limited to some research works. That’s all.”

Chalise stated that the institute has been doing research on works related to herbs and grass in the Himalayas. Though there are many faculties in the institute, only the research division is active, he said. “And the research is also more centered to Jumla alone.”

Requesting to be unnamed some officials at the institute blamed the agriculture ministry for turning its back on the institute. “There are no stipends, promotion opportunities, no encouragement for the staffs working here in the remote zone. That is why nobody wants to work here. But neither the concerned ministry nor the minister cares about it,” they said.