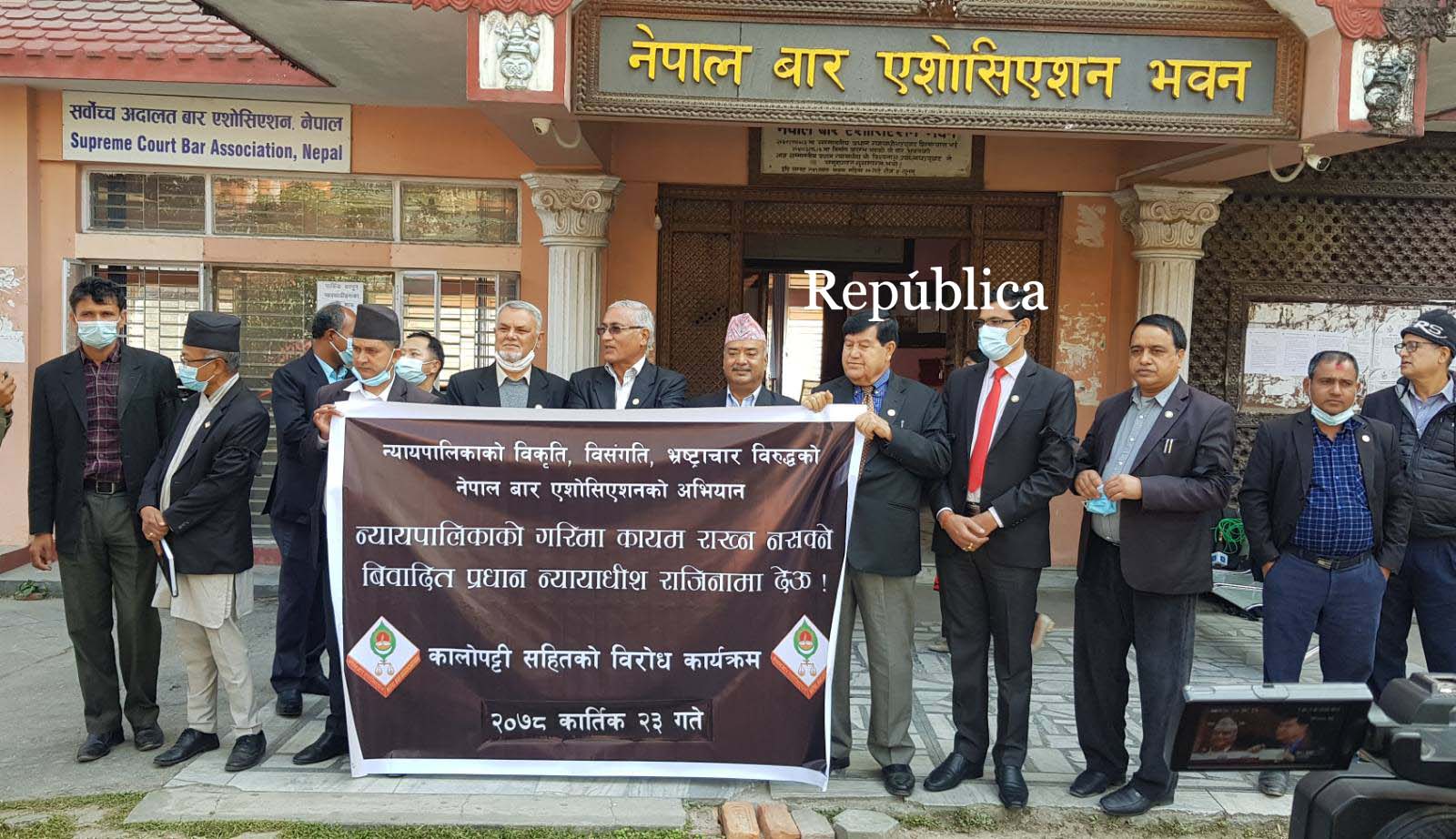 It's been already a week since the Nepal Bar Association (NBA), the umbrella organization of lawyers across the country, has stepped up protests demanding the resignation of Chief Justice Cholendra SJB Rana. Rana's own colleagues at the Supreme Court have also refused to hear cases scheduled by Rana except for those related to habeas corpus in an apparent bid to put pressure on him to step down from the post. The agitating lawyers have accused Chief Justice Rana of failing to maintain the integrity of the judiciary as reports have come to light that Rana was personally involved in 'give-and-take' deals with those in the government. There are allegations against Rana that he was personally involved in passing controversial verdicts to serve his vested interests. These allegations carry some grounds as Republica has reported a few such cases in the past. Most recently, Chief Justice Rana was accused of seeking a share in the cabinet to get one of his close relatives appointed as a minister. As the tussle between the NBA and chief of the judiciary continues, ordinary people who wait for justice for years, if not decades, are left in the lurch and their hope to get justice is fast fading away. Such a situation must end.

However, it seems the Chief Justice-Bar tussle is less likely to come to an end anytime soon if the political parties in parliament do not intervene on time. As Chief Justice Rana has vowed not to step down under pressure, there are only two ways to oust him from the post — impeachment or wait till his formal retirement. The political parties in parliament need to move an impeachment motion to take the path of impeachment to oust Chief Justice Rana from the post. This again looks less likely as the major political parties appear sharply divided on the issue of impeaching the chief justice. Should the ruling parties decide to impeach Chief Justice Rana, the main opposition party —CPN-UML — which is miffed with the apex court verdict to reinstate the dissolved parliament and issue a mandamus to appoint NC President Sher Bahadur Deuba as new prime minister - is reportedly preparing to impeach other justices who were part of the constitutional bench that passed the verdict. In fact, UML Chairman Oli has been publicly suggesting that it is not just about Rana but also other four justices who were part of the constitutional bench should go as well. We can only imagine the consequences if ruling parties follow suit to impeach more justices. Impeaching justices at the whims and desires of certain political parties or forcing justices to step down under pressure will both set negative precedents in the judiciary. Such attempts will only weaken the judiciary that faces political influences right from the appointment of justices. Thus, it is high time Chief Justice Rana, NBA and political parties represented in parliament negotiated to find ways to amicably settle this row without further delay.

There is no denying that our judiciary is plagued with a number of problems. Chief Justice Rana in his capacity as the head of the judiciary should take the blame for this. There are allegations that Chief Justice Rana has been dilly-dallying to implement various reform measures including an automated case allocation system as recommended by a committee formed under SC justice Hari Krishna Karki. Lawyers have raised serious questions over his professional integrity and his ability to safeguard the sanctity of the judiciary as a whole. Chief Justice Rana should be able to come clean on all these allegations and demonstrate his commitment in action to bring reforms to the judiciary. If Rana is not ready to do so, he should voluntarily step down not to let the credibility of the judiciary to erode further. Else, it is parliament that needs to take a final call as stipulated in the constitution. But there is need for caution here: any impeachment motion against the incumbent chief justice or justices should be based on adequate evidence and facts, not on the personal whims of certain individuals or groups or partisan interests.

CJ Rana assigns nine benches except for himself

Fossil fuel-based vehicles should be converted into electric ones: Minister Jhakri
26 minutes ago

Vote count postponed in Butwal : Who broke the ballot box seal and why?
56 minutes ago