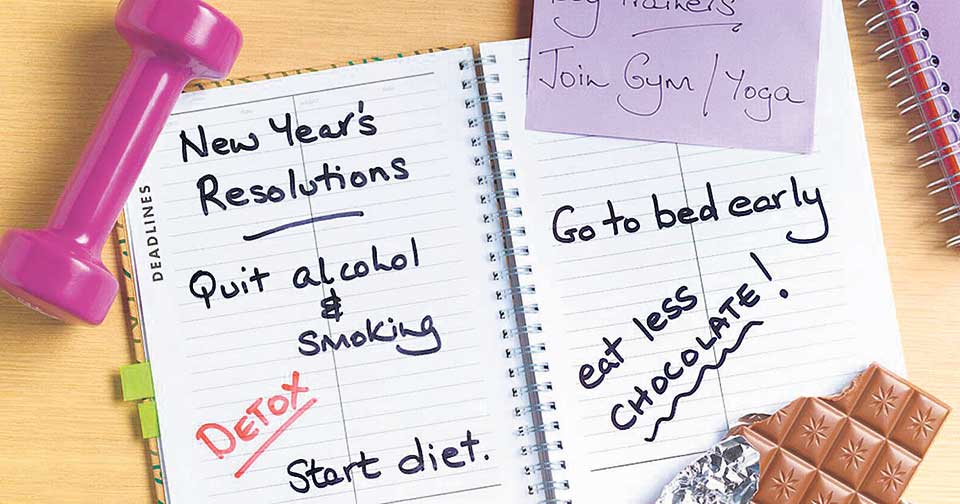 It’s that time of the year again when all the festivities are done and dusted with and it’s time for those of us who have made resolutions to finally start walking the walk. Many of us are waking up to the challenge of keeping those boozy, often publicly made promises that we thought we could always worry about later – next year, to be precise. It’s always the same resolutions every year, isn’t it?  It’s all about getting into shape, quitting cigarettes and or alcohol and even cutting down on procrastination at work. Even as I write this, gym memberships are probably on their way up and cigarette sales on their way down. But, unfortunately, while making resolutions is a universal habit, so is breaking them.

It’s certainly not uncommon for resolution makers to be feeling the blues around this time of the year after the abrupt end of the festive period. Add to that the fact that the changes we resolve to make are almost ‘reform’ based, which means drastically altering entrenched habits and it is not hard to fathom why the start of the year can be so depressing.

There is an entire industry catering to this – from ‘life hacks’ on how to manage the blues right down to mobile applications that help you track your commitments through planners or constant reminders. But eventually, this keeping your resolution thing is a bit like a hangover cure. Everyone swears this or the other works for them and what works for them might not necessarily work for you.

Change, whether personal or of any other kind, is difficult to achieve even in increments – never mind overnight, which is what we tend to expect from our resolutions. A magic wand that will somehow change our mentality, capability and attitude overnight, simply because we – oh so desperately – want to turn over a new leaf. It does work in some cases – for example you can quit tobacco cold turkey (from experience I can tell you it is the best way) but most resolutions take preparation and more than a simple dose of willpower. So you often find people making their resolutions public among their friends, acquaintances and family in the hope that fear of failure and shame will drive them to achieve their commitments.

Since most New Year resolutions have that ‘reform’ aspect I alluded to earlier, these sorts of negative emotions like fear (of failure) or guilt generally tend to be the driving force behind many of them. And you often see people tie in or partner with others to make resolutions in the hope that not letting others down and feeling guilty or shameful as a result might spur you on to keep your own promises. A lot of research points to positive emotions like love and joy (in working out or kicking a habit) working better than negative emotions in helping people stick to their resolutions.

Whatever the strategy, it is taking incremental steps rather than diving head first into the deep end that works for most people in the long run. I mean, the transformation doesn’t have to start on the 1st or even the 2nd but can be done in baby-steps, as it were. The key is making it sustainable rather than diligently adhering to a certain cut-off date. Even if you have all the willpower in the world it is still difficult in the long run to start from a fixed date without adequate preparation – both physical and mental. And the holiday season before the turn of the year is hardly conducive to any sort of preparation.

Personally, for me, it has always been the maintenance of a promise more than the start that is mind-numbingly difficult. It is pretty easy (if I may say so) to lay off the booze, cigarettes, and hit the gym during the first few weeks of January. At the outset, the appeal of a ‘new year, new me’ is what drives most people on but when that pool of self-control starts diminishing, it becomes all too easy to revert to type. Which is why most resolutions fade away before February has even kicked in.

So, perhaps it’s time we took some joy in our resolutions and weren’t so harsh on ourselves. Taking the time to make sure it works and sticks in the long run is far better than living up to any fixed starting point, whether it self-imposed or not. A lot of this ‘managing-it-slowly’ suggestion may encourage the ‘Rome wasn’t built in a day’ type of lazy start to an endeavour, but it has been shown to work for a lot of people. Well, if it doesn’t work, then you are probably living in the best country in the world right now. Because in another four months or so, you’ll get to have another stab at it. Happy New Year!

A subdued Carnival season began Wednesday after the coronavirus pandemic put an end to the crowd-heavy balls and street parades... Read More...

United aim for hat-trick of wins to start season

MANCHESTER, August 24: Fresh from consecutive 4-0 wins, Manchester United will be aiming for a hat-trick of victories when they... Read More...