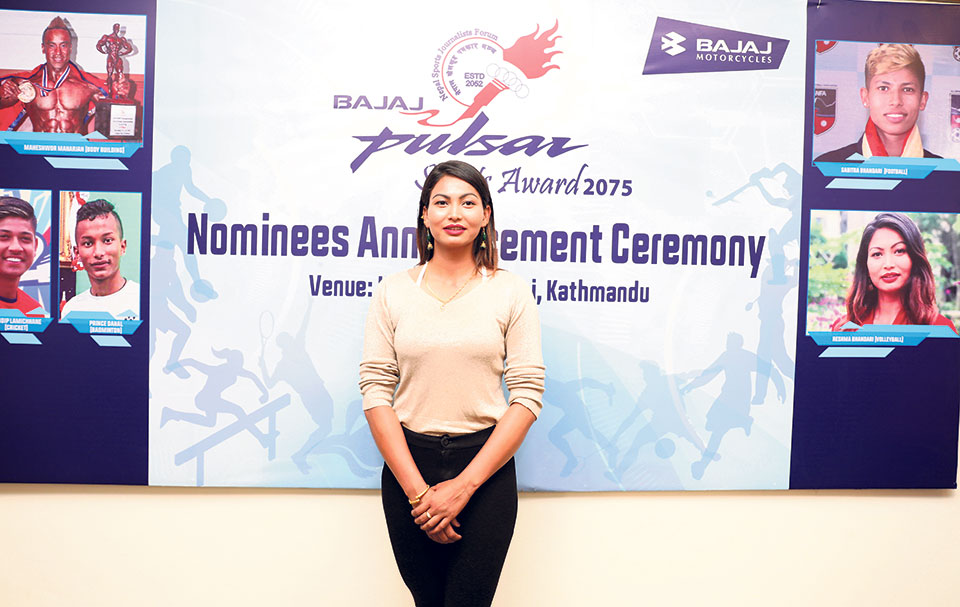 KATHMANDU, June 16: Volleyball diva Reshma Bhandari is one of the five nominees of the Peoples' Choice Award of the NSJF Pulsar Sports Award.

It seems that the 25-year-old all rounder volleyball player has been missed by cine industry. But Nepali sports, especially volleyball, is immensely benefitted by her. While viewing her performance on social media, she is followed like a popular celebrity.

She has now completely dedicated herself on volleyball, the national game of Nepal. But who knows in the twist of fate she could be seen on screen. She is currently in limelight due to her nomination in the Peoples' Choice Award organized by Nepal Sports Journalists Forum (NSJF). Footballer Sabitra Bhandari, bodybuilder Maheshwor Maharjan, badminton's Prince Dahal and cricketer Sandeep Lamichhance are the other nominees of the category.

The winners will be decided through SMS voting, Facebook likes, points allocated by the national sports association head coach and members of the NSJF, the umbrella organization of Nepali sports journalists throughout the country.

New Diamond School could not be isolated when talking about Nepali volleyball and Reshma is one of the products of the school. But her career as a player took giant stride after she joined Armed Police Force (APF) Club. She is a successful player both from her club and the national team.

Her nomination in the Peoples' Choice Award has added to her happiness. In her words, the nomination is like a dream come true. After her nomination, she said: "This award has been my long term dream. I wished I would one day be nominated for this award which is fulfilled now. Now if I win the award it will be a bonus for me."

Her fame and fan following is due to the game itself. Bhandari from Naikap, started playing volleyball while she was a sixth grader. Later she joined New Diamond School which gave her good platform to hone her skill as player.

She started playing school level volleyball since 2007 under mentorship of coach Kumar Rai. She represented Central Region during the fifth and sixth National Games. Recalling her entry into volleyball she said, "Coach Kapil Kishor Shrestha told me that APF was forming women's volleyball team and he invited me to play from the club. After completing my higher second level education I joined APF."

She marked her debut from the national team in 2014 during the first South Asian Invitational Volleyball Tournament in Kathmandu.

Since then, she has never looked back and is passionate to continue her career as a national player for long time. She is an equally bright student and is currently pursuing Bachelor’s Degree in management. She feels that her successful journey as a player was possible because of the support and love from her fans and family members.