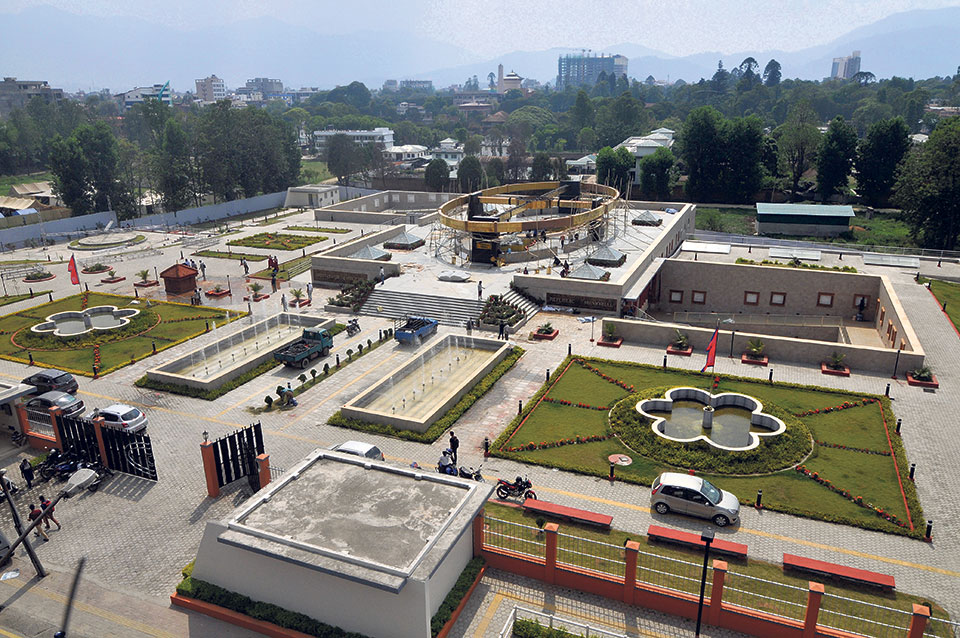 The Republic Memorial Park on the premises of the Narayanhiti Palace Museum in Kathmandu being decorated Tuesday on the eve of its inauguration. President Bidya Bhandari will inaugurate the park on Wednesday, coinciding with Republic Day. The park will be opened to the public from Thursday. Photo: Bijaya Rai/Republica

To open for public from Thursday

KATHMANDU, May 29: The Republic Memorial Park on the premises of the Narayanhiti Palace Museum whose construction was started in 2012 and completed two years ago, is finally going to be inaugurated by President Bidya Bhandari on Wednesday coinciding with the 11th Republic Day. Officials said the park will be opened to public from Thursday.

Senior Divisional Engineer at the Department of Urban Development and Building Construction (DUDBC) Macha Kaji Maharjan said that the Ministry of Urban Development (MoUD) is organizing an inauguration ceremony on Wednesday at the Museum. The monument has been constructed in 25,739 square meters area at the eastern part of the Narayanhiti Palace.

“After the inauguration, the park will be handed over to the Narayanhiti Museum,” he told Republica, adding, “The park is to be opened for the general public from Thursday.”

Maharjan added that there will be four pillars at the monument site in memory of those who killed, disappeared, injured or were lost during the April 2006 people's movement, which played a key role in ending the monarchy.

Then Prime Minister Baburam Bhattarai had laid the foundation stone of the monument on March 27, 2012. The monument in the park commemorates those who contributed to the establishment of Nepal as a republic.

Previously, the DUDBC had been criticism for not opening the park to the public even after the completion of the construction. Maharjan said that it was the ministry rather than the department that has closed the park gates for the public for two years.

Maharjan said that the initial contract for the construction of the park was first signed in December 2012. But the contractor was given two term extensions totaling a year and a half. He said that the 2015 mega earthquake, the Indian blockade and recurring shortages of construction materials delayed the project.