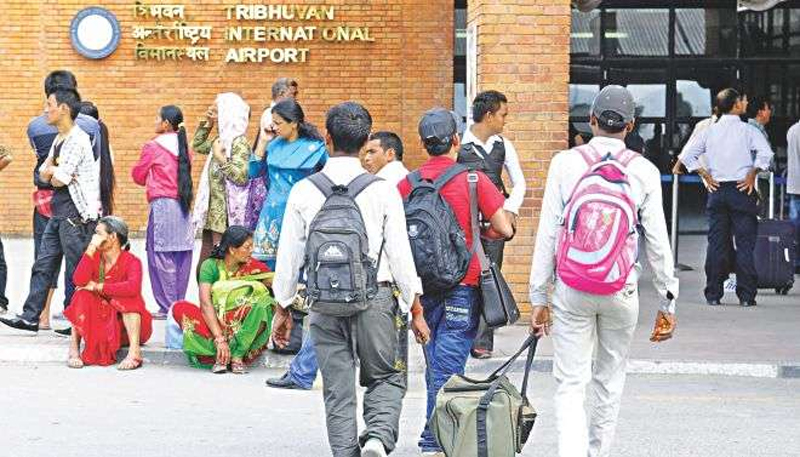 KATHMANDU, August 8: None of the government bodies in the country has exact information on the number of Nepali migrant workers in the Gulf countries.

Sixty per cent of the domestic workers who reach the Gulf countries illegally are transited through Tribhuvan International Airport itself and the rest used the routes of India, Sri Lanka, China and other African countries.

The report based on a field survey prepared by the Sub Committee of International Relations and Labour Committee, Legislature-Parliament confirms that smuggling of migrant workers from Nepal to the Saudi Arabia, Qatar, Kuwait and the United Arab Emirates is taking place in an organised way.

A team headed by the then Committee President Prabhu Saha conducted a field study from March 18 to 27 to take the stock of status of Nepali workers in those countries and problems faced by them.

"A manpower company earns at least Rs 400 thousands while sending a worker to the Gulf nation and the smuggling of Nepali as domestic helps is taking place on large scale." The report argues that control of trading and smuggling of migrants from Nepal to the Gulf countries is not possible without willpower of the high-political level and the authorities concerned of the government.

"Nepali human smugglers are learnt to have opened an office in Ajman, the capital city of UAE, and in Kuwait to supply Nepali domestic workers there and Nepalis are being traded as goats as such offices sell them to their employers on the basis of selection. The team received information about this through officials of the Nepali Embassies and the Nepali community there," the report states.

Stating the negligence of the State towards controlling the smuggling and trading of migrant workers, the subcommittee suggested the government for having a bilateral labour agreement first with the Gulf countries and then only open the routes for them.

The report further has concluded that the government's policy of sending workers on minimum charge did not become successful. It is mentioned in the report that workers went abroad by paying Rs 50,000 to 900,000 could not get jobs for three months.
It is stated that the problems could not be resolved unless manpower agencies were made disciplined, professional, accountable and responsible.