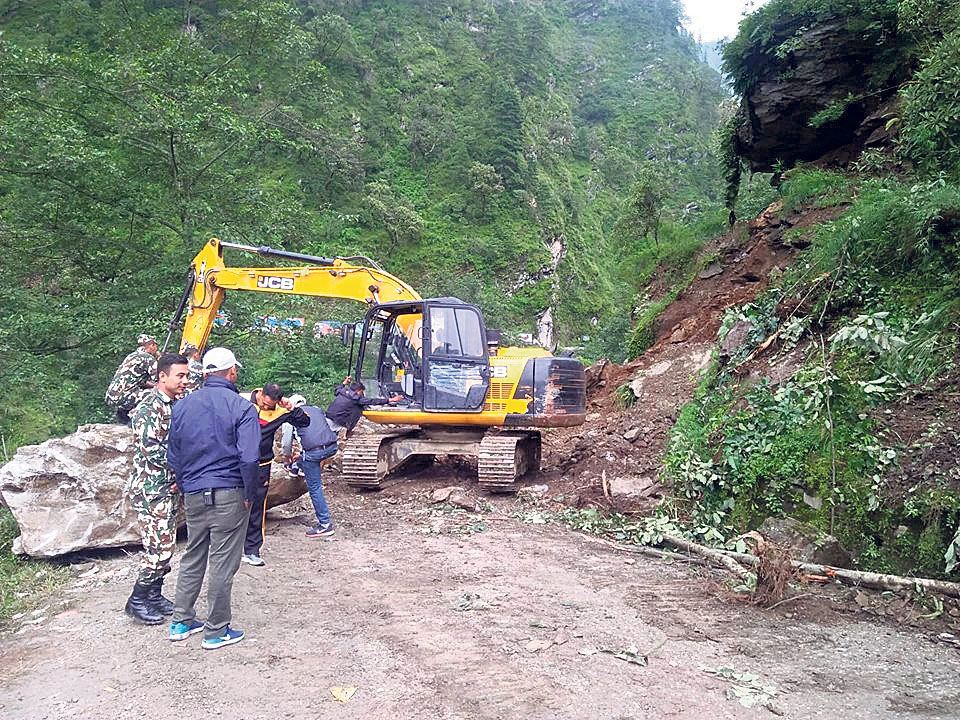 RASUWA, Aug 26: Repair works of Rasuwagadhi trade route, which links the country with the northern neighbor China, has begun from Saturday. The vital trade route has remained obstructed since the past month due to landslide debris.

A month ago, flood in Ghattekhola damaged a bridge, prompting the local authorities to stop vehicular movement along the road. The Dhunche-Rasuwagadhi road section sustained additional damages due to flood and landslides at Trishulikhola, Khopavir and Ghhattekhola about two weeks ago.

The Nuwakot Division Road Office confirmed that repair of Dunche-Shyafrubsi road section is underway. The office is working in collaboration with Nepal Army to repair the road. Excavators and loaders are being used to clear the debris off the road, according to Shital Baniya Chhetri, chief of Kaligunj Battalion of Nepal Army.

The repair work is estimated to take around a month. Chief District Officer Krishna Poudel said the Ministry of Defense and the road division office are working together to repair the road.

Trade with China has been hit hard due to the obstruction of the road. Imports from the regional powerhouse China has seen considerable decrease due to the same reason.

After the Tatopani trade route to China was closed following the 2015 earthquake, Rasuwagadhi route had become the only reliable route for trade with China. The northern neighbor has also declared Rasuwagadhi as an international trade point. The declaration has increased trade activities in the region.

When operational, over 250 vehicles operate along the Rasuwagadhi route. Kerung of China is 24 kilometers from Rasuwagadhi border point.

RASUWA, Feb 27: A total of 32 bridges will be constructed along the Galchhi-Syafru road section connecting Rasuwagadhi, an international... Read More...

Rasuwagadhi border point to be closed till May 15

RASUWA, May 10: In view of the local level election in Nepal, the Chinese side is to close the Rasuwa... Read More...

KP Oli sworn in again as PM, no new faces in new cabinet
4 hours ago