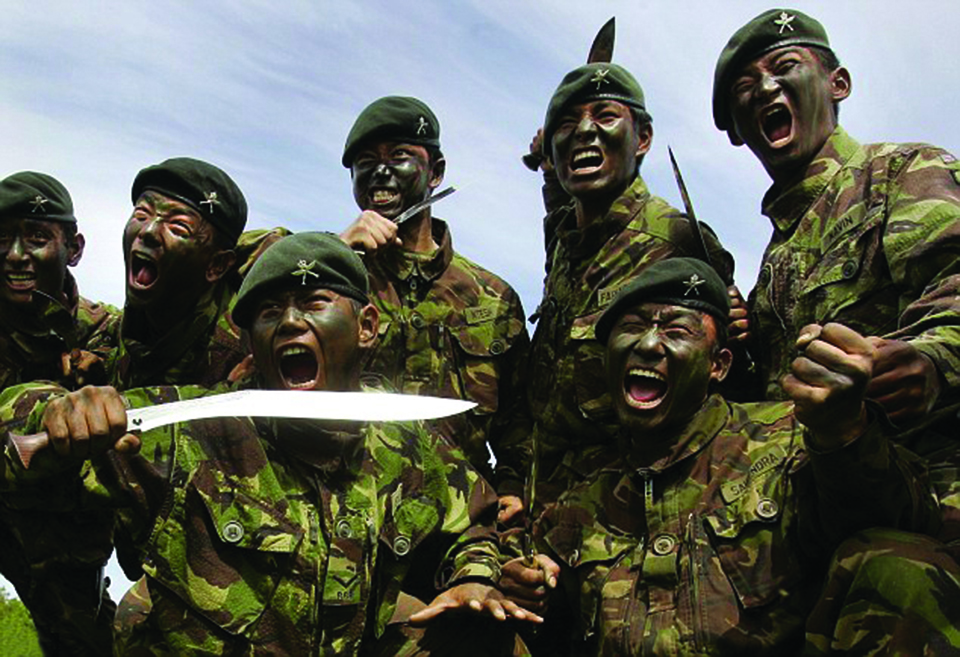 On November 11, First World War centenary ceremony was organized in Paris with great zest and significance to commemorate the Armistice that brought World War I to an end, and to honor the millions of soldiers who died in the conflict. The ceremony was presided over by French President Emmanuel Macron, while the Heads of State and Heads of Government of over 50 countries and their representatives participated in that grandiose event.  It reminded of significance of Entente Cordiale, a coalition which had resulted in extensive recruitment of troops to challenge German military programs across Europe, where Nepali youths were extensively employed to fight on behalf of the British.

The British government spent around 100 million pounds for various programs of the occasion but it did not even appreciate Nepal’s Gurkhas, their loyalty and sacrifice in this auspicious event.  A book published by Nepal Army confirms that nine battalions had participated in the First World War and almost 200,000 troops were sent to fight as British Indian Army. Historians, Nepali and foreign, have estimated that almost 20 million Nepalis participated in the war, making our rural villages empty of able-bodied youths.  British Indian Army was the largest volunteer army of the world and British forces were the largest among those killed during the war.

Prime Minister Chandra Shumsher from Nepal provided the British soldiers and financial assistance. It is dishonest not to acknowledge this truth.

As a matter of fact, many crucial successes in the battles fought by British forces were determined by the Gurkhas. No one spoke of this during the centennial ceremony. Except a foreign secretary, there were no veterans nor incumbent senior Army officers or ministers attending this auspicious occasion. Nepal’s ambassadors to France and Britain also failed to issue statements to pay tribute to our heroes.

On the other hand, Indian Vice President and a few Indian military officers took part in this world event despite the fact that India was still a British colony during the war and Nepal had contributed as a sovereign and independent nation.

During the war, youths from Nepal were recruited in the East India Company Army and were extensively employed in many crucial decisive battles where the British force had succeeded by virtue of their special martial class. Adolf Hitler later said he feared with none, but Gurkhas.  BBC Nepali Service recently interviewed a grandson of a Gurkha who had fought and received the medal of meritocracy for his bravery in Gallipoli.

An infantry soldier will not have anyone behind him to picture his deadly last assault to enemy trench, where the hero succumbs to injury after capturing the indispensable fort by chopping off the head of enemy  with his only weapon, Khukri.

Writer and politician Pradeep Nepal once said British and India gained victory over their opponents due to Gurkhas. In fact, their discipline and bravery was a driving force to guarantee sovereignty of these two countries.

After the battle of Nalapani and end of Anglo-Nepal war in 1816, Gurkha recruitment increased in East India Company Regiments, starting from a Shirmoor Battalion to many more regiments down the line making their history of gallantry in their service in British and Indian Armed Forces, especially after the tripartite agreement signed between India, Britain and Nepal in 1947.

Since then a large number of Nepali youths have been recruited in British and Indian Army, Gurkha Contingents and Reserve Units. These soldiers have been employed in many wars—in Falkland Islands, Afghanistan and in Iraq to name a few—under their respective foreign command. They proved their gallantry in India’s wars against Pakistan and China as well.

At the same time, Nepal’s contingents are engaged in United Nations Peace Keeping Operations in many parts of the world since 1956.

This shows that brave heroes of Nepal’s hills have been engaged in fierce battles since First World War and it continues to this day. But they are often ignored in ceremonies like centennial event.  Field Marshall Sam Manekshaw of Indian Armed Forces is rightly attributed to as saying “if anyone says he does not fear anything, he is either a Gurkha or a liar.”

Few days ago, I was reading a story of Colonel Lalit Rai, the winner of Vir Chakra of Indian Army. The story relates to how he fought during India’s war with Pakistan. He was left with eight men, all exhausted with their bullets, during Kargil War of 1999.  They were defending a strategic border between India and Pakistan with courage and vigor. They succeeded at the end.

Gurkhas who fought during the First World War must have scores of such stories. Centennial ceremony could have searched for and archived those stories.

Government of Nepal should take initiatives to explore and archive the stories of sacrifice, bravery and sufferings of the Gurkhas who fought during the wars. That will be one way of paying tribute to the heroes.

Many grandsons and granddaughters of those Gurkhas still live in remote villages. If they know these stories, they will be able to pass them on to their posterity. Besides, all stories of gallantry should be documented.

Historians, Nepali and foreign, who wrote and published battle stories of these innocent brave sons of Nepal deserve special thanks. They have brought the bravery and sacrifice of Gurkhas to wider audience.

Centenary celebration in Paris was a right occasion to offer a tribute to those fearless Gurkhas whose blood, sweat and loyalty saved the British and French empires against their aggressors by sacrificing their lives, leaving behind their families and children thousands of miles away in Nepal’s hills.

The author, former Spokesperson and Retired Brigadier General of Nepal Army, is currently CEO of Nepal Institute for Strategic Studies