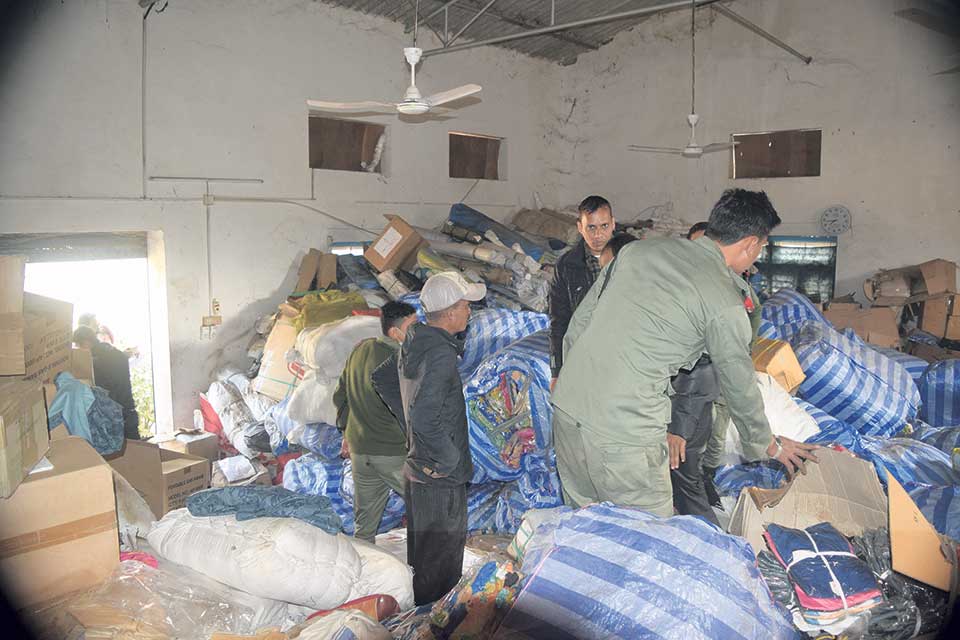 NUWAKOT, Dec 28: Huge amount of relief materials meant for the earthquake victims remained stored in a warehouse in Bidur while the victims were left high and dry for over two years.

Thirty-two months after the devastating earthquake, the District Disaster and Relief Committee (DDRC) of Nuwakot finally reached the training center of Bidur where the relief materials were stored.

According to Nanda Lal Sharma, administrative officer at the District Administration Office (DAO),Nuwakot, officials have been mobilized to get rid of the rotten and damaged rice, pulses, biscuits, salt and other essentials donated by national and international organizations. He further informed that the officials have been told to check whether some materials and goods such as tents, tarpaulins, bed sheets, utensils and clothes are still usable or not.

"Relief materials worth Rs 50 million were stored in the center which was provided by the countries like India, Germany, China, and Thailand among others," informed Sharma. The DDRC has directed the authorities to destroy the damaged materials.  "We have been told to keep the usable goods for the victims," Sharma added.

While the relief materials meant for distribution to the quake victims have been piled up in the warehouse, victims are shivering out in the cold. Even after so many months of the disaster, a large number of victims still live in makeshift tents. With this, the victims will be spending their third winter in makeshift tents. In lack of coordination between political parties, DDRC and other stakeholders, the relief materials have become the food for rodents.

The local donors wanted to distribute the materials in their own localities while others dissented. This is the reason why the relief materials were not distributed on time, according to Indra Bahadur Pandit, chairperson of the Forum for Protection of Consumer's Right (FPCR), Nuwakot.

KATHMANDU, August 15: The government has been sitting on  billions of rupees in relief funds for the victims of natural disasters... Read More...