Reflections on "trilateral" meeting in Goa 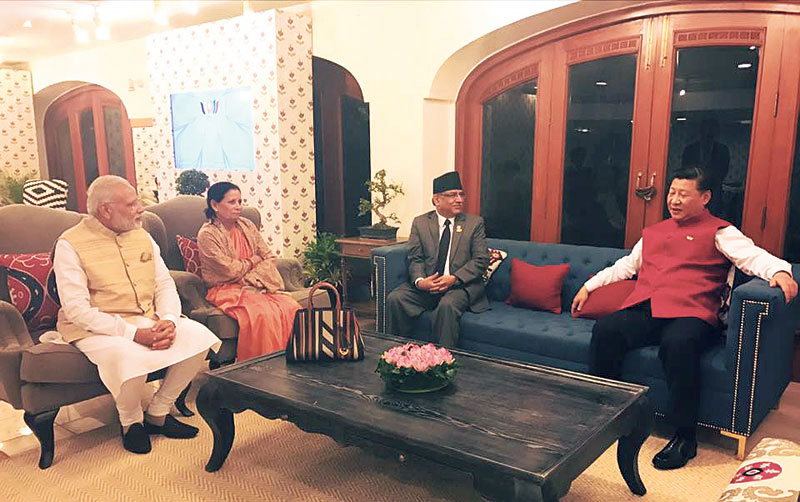 Both Chinese and Indian interest in Nepal has been on the rise in recent times.

NEW DELHI, Oct 19: While the scheduled meeting between Chinese President Xi Jinping and Nepali Prime Minister Pushpa Kamal Dahal ‘Prachanda’ was underway in Goa on the sidelines of BRICS summit, Indian Prime Minister Narendra Modi dropped by turning the meeting into a trilateral one for the next 20 minutes.

Of course eyebrows were raised because it was unexpected of a bilateral meeting between the leaders of two sovereign states to culminate this way. But none of the three leaders showed any displeasure at this turn of the event officially. Nobody knows for sure if this meeting was deliberate or coincidental. Equally uncertain remained the outcome of this meeting. However, PM Prachanda’s aide and son Prakash Dahal said on the social media, “With the help of the right support from these two major countries, Nepal’s prosperity is possible”.

An official release by Chinese officials read, “President Xi said that China and Nepal are close neighbors connected by mountains and rivers.” It further stressed, “China – Nepal relations have been developing in a sound and steady way.” According to the statement, the Chinese President assured his support and cooperation in rebuilding Nepal from damages caused by the April 2015 quake and also pointed out that China and Nepal could work on several sectors of economic cooperation, including industrialization of agriculture, infrastructure development and more frequent people-to-people exchanges in areas of tourism, education and youth exchanges.

Although the meeting between Nepali PM Prachanda and the Chinese President Xi was an informal one, the exchange of views by the two leaders on increased cooperation has been viewed positively by different quarters. As per an arrangement made during the erstwhile Oli government, President Xi was scheduled for a stopover visit to Kathmandu during this very BRICS summit. The visit was cancelled due to change of guards in Kathmandu. But in this meeting with PM Prachanda, President Xi once again conveyed his willingness to visit Nepal at his earliest convenience, sources said.

Whether President Xi visits Nepal anytime soon, both Chinese and Indian interest in Nepal has been on the rise in recent times. Both the powers are wary of the other’s increasing influence over Kathmandu, especially New Delhi sees increasing Chinese presence in Nepal as an intrusion into its sphere of influence.

This ‘coincidental’ meeting of the three leaders is an indication that China and India have certain shared interests in Nepal and that it’s up to Kathmandu to utilize the opportunity that it is offered in its own interests without undermining the legitimate interests of both of the neighbours. However, Nepal has a lot to do in terms of capacity building so that it can reap benefits from its next door neighbours.

Mandal is a contributing writer from New Delhi.

LONDON, Nov 8: The retired Nepali Gurkha soldiers have postponed their hunger strike in a bid to create a conducive... Read More...