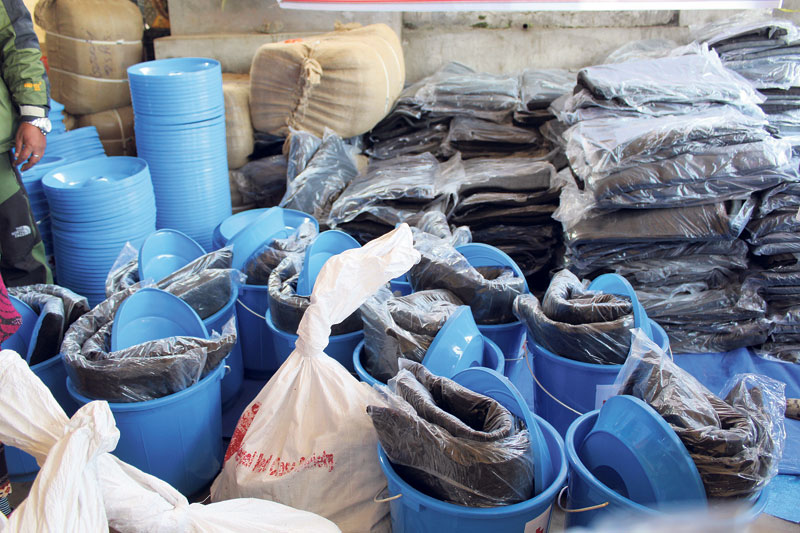 Victims term the relief a mockery of their plight
DHADING, Jan 17: While earthquake victims are desperately waiting for grant money to rebuild their homes, Nepal Red Cross Society (NRCS), the largest humanitarian organization in the country, is starting to distribute relief materials in Dhading district 20 months after the catastrophic earthquake of 2015.

On hearing that NRCS was distributing quake relief, Hira Bahadur Chepang of Bunpung village rushed to Chauradi Bazaar with some of the other villagers early Sunday morning.

But they were utterly disappointed upon receiving tarpaulins and kitchen utensils as relief, items that should have been distributed immediately after the quake and not 20 months later.

“We were expecting construction materials. The distribution of tarps and kitchen utensils after almost two years of the quake completely baffled us as these are not necessary now,” said Chepang. As the relief distributed is not in accordance with their current needs, the victims took the NRCS largesse as a mockery of their plight, they said.

“There's no use for these kitchen utensils,” said Ram Kumar Chepang of Dhussa-8, showing plastic buckets, plates and tarpaulins that he received as quake relief. “If we were given construction materials instead, it would have been very useful. It would have made a huge impact in the villages.”

Another local, Prem Bahadur Chepang, said the tarpaulins they received as relief were of no use when they are already living under temporary shelter put up with corrugated iron sheets. “Had we received two sacks of cement instead, we would have managed the timber and rocks  by ourselves with the money we earn working as day laborers,” he added.

There are 1,511 households in Dhussa VDC. NRCS on Sunday distributed one tarpaulin, a bucket, a blanket, a length of rope and three steel plates to each family in wards 7, 8 and 9.

According to Narayan Timilsina, vice president of the Dhanding chapter of NRCS, the organization will be distributing the relief materials in the remaining wards until Tuesday. The distribution program is as per the planning by the central office, he added.

Dhading Chief District Officer (CDO) Umesh Prasad Dhakal sympathised with the victims, saying such relief materials make little sense at a time when everyone is focusing on reconstruction.

NRCS has  not released information on any of their activities, it is stated. However, it gathered representatives of various stakeholders and took them to the relief distribution site on Sunday.

DHADING, July 14: More than a year and a half after the devastating earthquake of April 2015, the government distributed Rs... Read More...

KATHMANDU, Nov 8: The National Reconstruction Authority (NRA) is flooded with over 173,000 complaints relating to the grant amounts from earthquake... Read More...