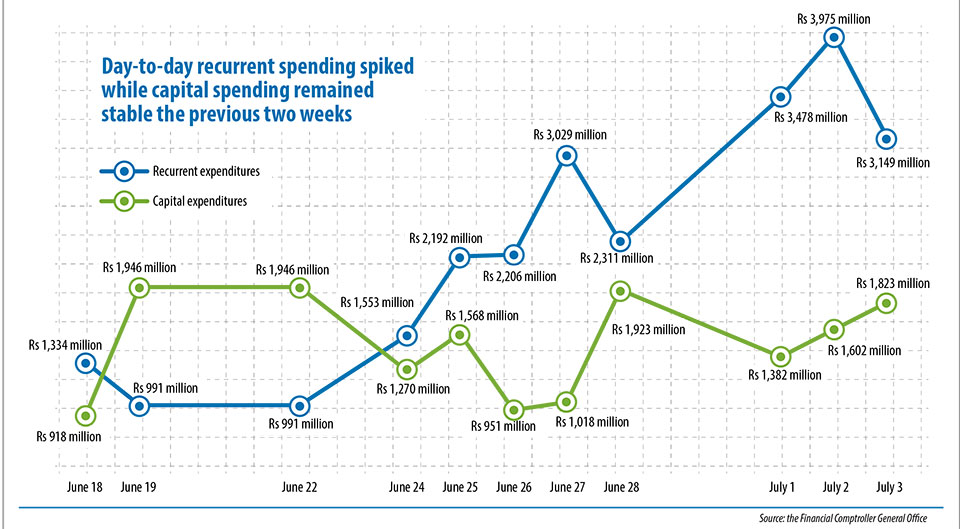 KATHMANDU, July 5: The government’s capital spending is increasing steadily, except for few days, while recurrent spending has spiked in last two weeks, an analysis of spending figures made public by Financial Comptroller General Office shows.

Data shows spending of taxpayer’s money in development activities increased by 5.21 percentage points to 54.26 percent, or Rs 181 billion, till Tuesday compared to two weeks ago. In the first 11 months of the current fiscal year, such spending was below half of the allocated Rs 335 billion.

The incumbent government, which came to power in February, had expressed commitment to make reforms in financial management of the government. But it has not happened.

Giving a momentum to capital spending was one of the major agendas of Minister for Finance Yuba Raj Khatiwada. But the finance ministry focused only on revenue which had slightly dwindled at that time, and made no effort to increase spending.

Recurrent spending has posted a whopping growth, despite Khatiwada’s promise to lower such spending by adopting some austerity measures like controlling foreign junkets.

While issuing white paper on economic issues after assuming office at the finance ministry, Khatiwada had criticized the previous governments, accusing them of encouraging fiscal indiscipline and preparing unrealistic budget and programs.