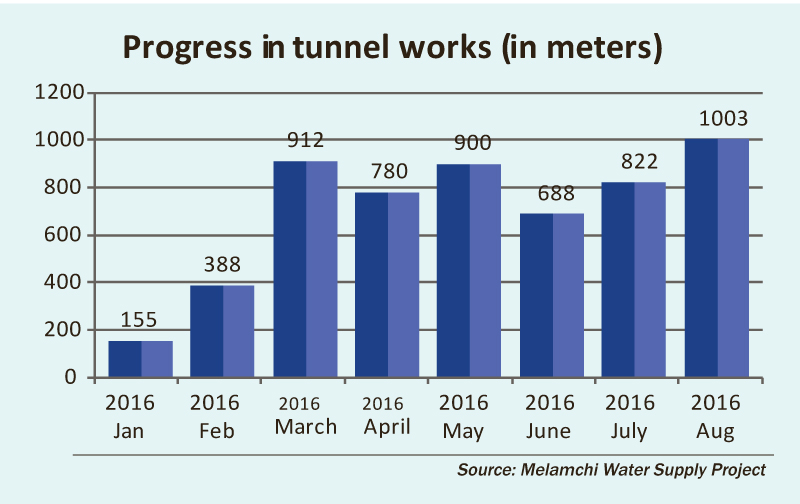 MWSP office informed that a total of 1,003-meter tunnel has been dug in August which they said is monthly record.

KATHMANDU, Sept 5: Record progress is being made in digging the tunnel of the Melamchi Water Supply Project (MWSP) and if this pace is maintained, the tunnel will be completed by June next year and Melamchi water will reach Kathmandu by October 2017, according to project officials.

MWSP office informed that a total of 1,003-meter tunnel has been dug in August which they said is monthly record since the project work began over a decade and a half. A total of 5.1 km tunnel has been dug in the last six months. The last monthly record was 912 meter, which was achieved in March. Before the April 2015 earthquake, the 745 meters was the maximum monthly excavation record.

Cooperativa Muratori e Cementisti di Ravenna (CMC), Italian contractor for civil works and head works, was dillydallying tunnel excavation since the earthquake and later the work was affected by the Indian blockade.

CMC had sought US $ 565 million additional funds to address its cash flow problem from MWSP, which has paid US $ 2.5 million recently. Executive Director of MWSP Ghanashyam Bhattarai said he is encouraged by the progress. The project will supply 170 million liters of drinking water daily.

ADB is the lead donor of the project and this is the oldest ongoing project across ADB.

MWSP's Information Officer Rajendra Prasad Panta said that contractor has improved its internal management as well as encouraged its staff by paying incentives. "If the contractor is able to maintain the current pace of work, it may be eligible for an incentive of 0.05 percent of the total contract cost per day as its deadline extension is still under consideration after last year's earthquake and blockade," added Panta. The tunnel's initial completion deadline was September 2016.

CMC had slowed its work despite return of normalcy after the earthquake of April 2015 and its officials were involved in political lobbying to buy more time.

It is also learnt that it has paid bonus to the staff equal to the monthly salary for the outstanding work while it has also announced additional incentives for completing remaining 1 km Sundarijal-Sindhu tunnel section within two months.

Sources claimed that CMC is eying similar works in other projects and is putting its all efforts in the work to project a positive image. An official at a government-owned hydropower project confirmed that CMC had contacted his office showing interest in civil works.

In a blog post of the Asian Development Bank, the bank's senior project officer Laxmi Sharma in June wrote, "There has been continuous improvement in the rate of tunnel excavation lately." Sharma also deals with the Melamchi project.

MWSP had awarded the Rs 7.72 billion contract for tunnel works and headworks to CMC in January 2013 after terminating the contract with Chinese contractor over non-performance.

KATHMANDU, APRIL 10- The much-awaited construction work of the tunnel of the Melamchi Water Supply Project has been completed on... Read More...

KATHMANDU, March 3: The Supreme Court on Friday postponed the recording of statements of Kantipur Publications officials in a contempt of... Read More...