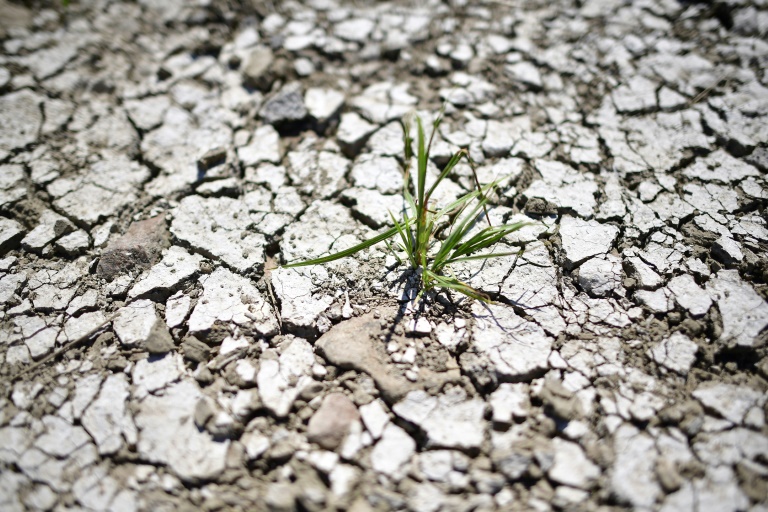 A plant is pictured at the dried out riverbank of Elbe in Magdeburg: Photo Courtesy: AFP/RSS

As the blazing sun beats down, combine harvesters working the normally fertile breadbasket of Saxony-Anhalt in former communist East Germany kick up giant clouds of dust as they roll over the cracked earth.

"It hasn't really rained since April and that's the main growth period for our grains and the other crops -- we've never seen anything like it," said Juliane Stein of Agro Boerdegruen, a farming conglomerate formed after German reunification in 1990.

"We've reached the point here in Germany where we're talking about a natural disaster that's a threat to our livelihood."

A natural disaster is declared by German authorities during a drought when at least 30 percent of the average annual harvest is destroyed.

Given the massive losses feared by the sector this year, the German Farmers' Association (DBV) has called crisis talks on Tuesday to discuss urgent state aid.

While southern Germany has seen largely normal rainfall this year, the north has been in the grip of an unrelenting high-pressure system creating weather conditions more familiar in southern France or Italy.

The grain crop alone has shrunk by up to eight million tonnes or around 18 percent this year, stripping 1.4 billion euros ($1.6 billion) from revenues so far.

"The government needs to declare a state of emergency so that farmers in areas hit hardest by the drought can be helped directly with cash aid," Rukwied said.

While the sunshine has fostered larger and sweeter fruit than usual, sugar beets, rapeseed, potato and corn crops have been decimated in the drought, prompting farmers to cut their losses and harvest two to three weeks earlier than usual.

"The cornstalks are knee-high" and are sprouting smaller cobs or none at all, said Stein of Agro Boerdegruen, located about 150 kilometres (90 miles) west of Berlin.

"Normally they should be over two metres by now."

Stein said that to grow crops like potatoes -- a staple of the German diet -- her farms have long relied on watering systems because the region, in the rain shadow of the Harz Mountains, is generally too dry.

However it is too late to expand such systems to other fields this year, and in the long run would be too expensive to justify with other crops.

Meanwhile the knock-on effects of the grain shortage have already been dramatic, depriving farmers of animal feed and sending prices soaring.

Many dairy farmers have responded by selling their livestock. The number of slaughtered cows and heifers surged 10 percent in the first two weeks of July, according to figures from the Federal Agriculture and Nutrition Agency.

While Sweden and Greece have been ravaged by devastating forest fires, Germany has been less afflicted due to its less vulnerable types of vegetation and higher concentration of fire brigades.

However grain fields mark an exception and Saxony-Anhalt has seen wide swathes of farmland go up in flames.

"Wheat when it's dry is as flammable as straw," Stein said.

A drive through the farmland east of the River Elbe shows crops covered with the black soot of recent fires, with 70 hectares (170 acres) near the village of Barleben bearing the apocalyptic remains of a spark that raged across the parched field this month.

So will northern Germany become a region of olives, wine and citrus fruits? Stein said farmers here will likely find other ways to adapt.

No-till farming, which allows seeds to be sown without disturbing the soil, and the use of mulch to improve germination rates are two techniques already in practice.

Meanwhile seed breeding is developing crops that are more resistant to heat and dryness. However the process can take a decade or more and the European Court of Justice ruled last week it should be considered genetic manipulation and thus subject to stricter scrutiny by regulators.

Thomas Endrulat of the German Weather Service said it had been at least 15 years since the country had experienced a similarly hot, dry summer.

Such extremes matched forecasts seen in climate change models for Europe but he warned against drawing catastrophic conclusions from an "exceptional" year.

"You are seeing a rising number of heatwaves, just like you have hard winters or heavy rainfall and floods," Endrulat told AFP.

"That bandwidth is part of our weather in central Europe."

But for farmers in the grip of this year's drought, that is cold comfort.

"You plant the grain in the autumn, it germinates and then it needs water in the spring to grow," Stein said. "If that doesn't happen, there's nothing you can do."

KATHMANDU, August 18: Nepal Electricity Authority (NEA) enjoyed one of the best fiscal years in its history in FY2016/17. ... Read More...