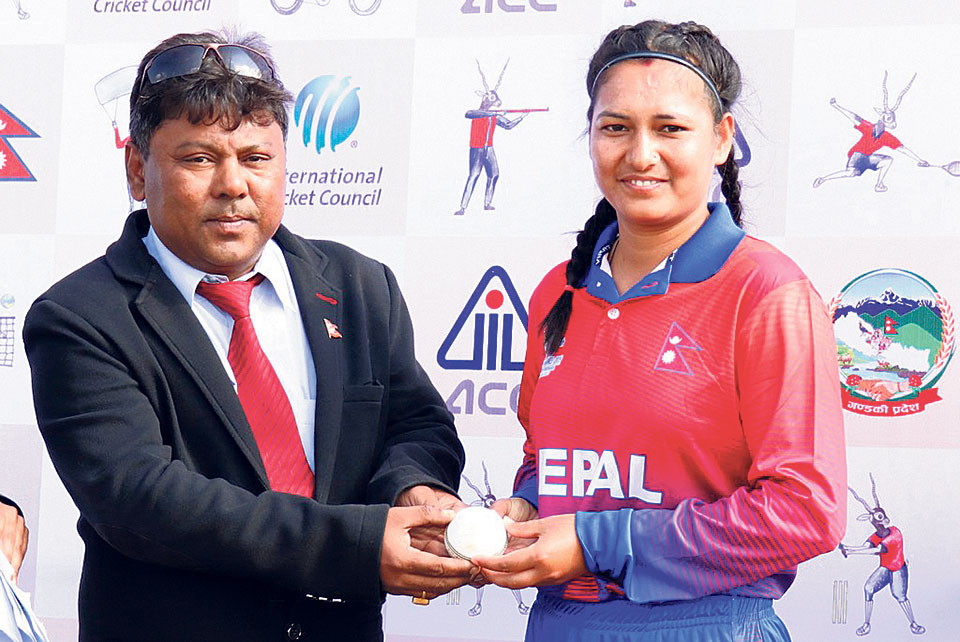 Nepal’s Anjali Chand (right) receives the player-of-the-match award from match referee Satyajit Sarkar at the end of the women’s cricket match of the 13th South Asian Games against the Maldives at the Pokhara Stadium’s cricket ground in Pokhara on Monday. Photo: Republica

POKHARA, Dec 3: Nepal national women team completed the chase of 17 runs in five deliveries to humble women cricket team of Maldives by 10 wickets in the first match of the 13th South Asian Games (SAG) being held at Pokhara Cricket Ground in Pokhara on Monday.

Maldives chose to bat first after winning the toss in their first international tournament. The batters failed to make any impact in the match as they were shot out for 16 runs in 10.1 overs.  At one stage, Maldives lost four wickets (fourth, fifth, sixth and seventh) at the score of 15 runs. The debutant innings lasted one more run before getting all out for 16. Hamza Niyaz's nine runs were the most in the innings followed by Hafsa Abdulla's four runs. Nepal conceded three extra runs as nine batters were dismissed without adding any runs to the total.

Nepal's Anjali Chand was declared player of the match for her record-breaking bowling figures. She took six wickets without conceding a run in her 2.1 overs. Similarly, Karuna Bhandari took two wickets for four runs in her two overs in the match. The other two batters were caught short of crease.

Nepal captain Rubina Chhetri Belbashi expressed satisfaction after a dominating win. She also mentioned that the team was taking the SAG as an opportunity to prove themselves a credible team at the international stage.

Maldivian captain Juna Mariya was taking an opportunity to gain as much experience as possible despite not being competitive in their first international cricket match.

Sri Lanka and Bangladesh will face-off on Tuesday at the same venue.