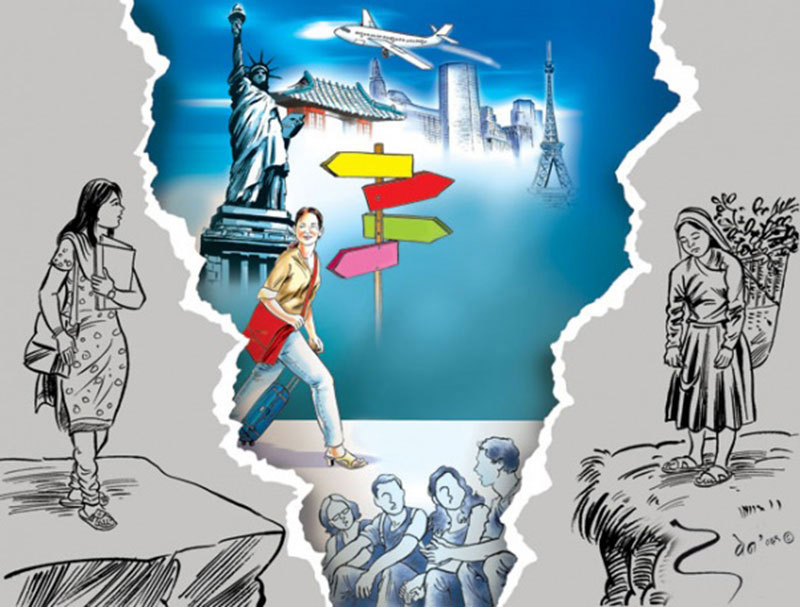 The car mechanic from Patna, Bihar, loves the Kathmandu weather and the way of life here. During a casual conversation I had with him while bringing him home to see problems with my inherited, ageing Toyota Corolla, the mechanic, who is in his 30s, told me he goes back home sometimes, only to yearn for his work station in Sano Bharyang, Kathmandu.

Thanks to years of living in Kathmandu, he finds the weather in Patna unbearable. The Patna summers are too hot and the winters too cold, he says.
“On the contrary, in Kathmandu, I can bike by putting on sandals and some light garments even during the winter.”

That’s acclimatization and a bit of acculturation too.

This does not mean it’s always big smiles and a smooth ride for Indian nationals in Nepal. I ask the owner of this thriving car maintenance business, which has almost all of its young workers from Bihar, whether he also owns a car.

The mechanic says buying a car is no problem, but getting paperwork done for car ownership transfer is really difficult. He shared getting a valid driving license for car/motorcycle from the transport management office was not an easy job, though he had Indian license.

The process is time-consuming, he says. “It takes three days to get the work done.”
Imagine, how much more difficult it must be for the people from Nepal, who have made India their Karmbhoomi (the work station), given India’s security sensitivities and tough rules against aliens, especially those from Nepal whose international image has taken a beating due to protracted political crises at home and whose embassy in New Delhi experiences quakes of sorts whenever Delhi Metro trains trundle along the Blue Line developed underneath in blatant violation of international practices.

An understatement here: Clearly, the Indian Embassy in Lainchaur, Kathmandu, is not in a shaky position like our mission in Delhi.

Leaving aside certain legal complexities associated with living in alien land, the young man from Patna says he loves Kathmandu. And one day, he aims to acquire Nepali citizenship, despite the fact that he can definitely make more money in Patna than in Kathmandu.

Who would not want to live and work in a beautiful country like Nepal? Who would not want to live in a society that is relatively more tolerant towards aliens than many others? A bit of strife is there, a bit of insecurity is there, but which part of the world is safe these days? That too for migrant workers? America? Europe? Africa? The proverbial promised land, the land of milk and honey have all vanished.

Then why are the sons and daughters of the soil from the Tarai, the Himalayas and the Hills not finding enough opportunities in the country of their birth? Why are they heading abroad in search of greener pastures and ending up doing dirty, difficult and dangerous jobs in some of the most dangerous parts of the world, in the best-case scenario? Even if they turn deserts into cultivable land and bustling metropolises through their hard work, who will erect monuments for their contributions and write their names on them?
It is said that musk deer roams all around the forest in search of the source of the fragrance, unaware that the pod from which the fragrance is coming lies in its navel!
Rather than toil in alien soil, rather than shedding blood in foreign land for a foreign cause under foreign masters, it’s time for Nepal’s youths to reclaim their country, their destiny. The youths, who have survived 3D jobs and wars abroad, need to come home and give back to the homeland all it owes by using skills they have acquired overseas. Otherwise, they enjoy no moral high ground to scold politicians and their government for all the ills facing Nepal.

The able-bodied Nepalis living in this country for different purposes have some duties towards this country, too. The next time you enforce a general strike, think about this country and its economy that’s bleeding dry. Think about the economic costs of your protest. Think of Nepali youths, who go abroad in search of lucrative jobs, only to come home back in coffins. Think of fellow Nepalis, who burn their youth to send home remittance.

The next time a bunch of aliens set up shanties by the roadside and start plying their trade, be there to draw the attention of government bodies. Press your government to start a system for their registration, bring them under tax net and prevent Nepal’s slide into a free country.

Migrant Nepalis, you can do this by working for your country in your country and not by heading abroad in search of plum jobs. Otherwise, Nepal may soon turn into a haven for undocumented migrant workers from far and wide.

Summing up, for Nepali youths, it’s time to make the country of birth (Janmabhoomi) Karmabhoomi (the land of toil) too. For Nepali nationals from the Tarai, the Himalayas and the Hills, it’s time to reclaim your country, your destiny.

Above all, will it be more than handing over your country to a bunch of politicians, who think of nothing else save their individual progress and prosperity at the expense of the
people and the country?

If not, what are you waiting for? Come home and reclaim your country.