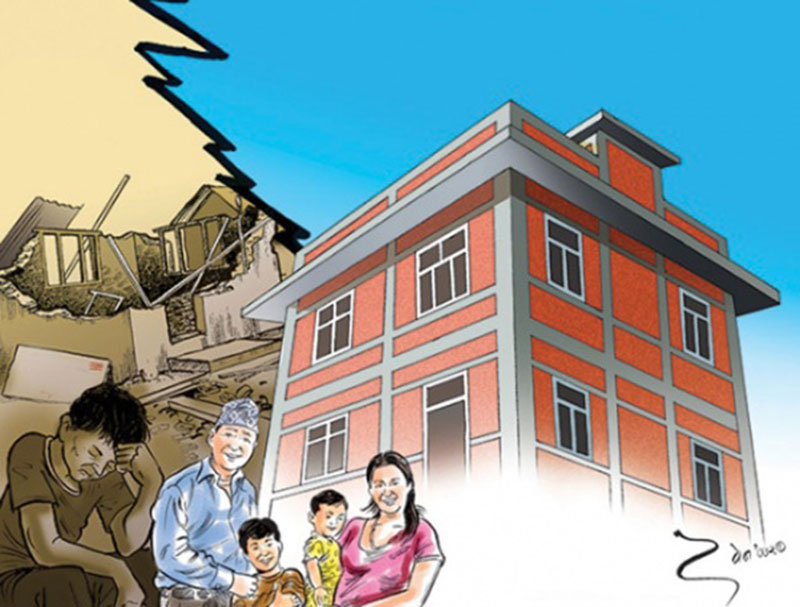 In order to please their vote banks parties are making unrealistic promises to quake victims
Following last year’s April 25th earthquake and its subsequent aftershocks, post-earthquake reconstruction works were expected to move swiftly. The victims lived with this hope. Many described the devastation as an opportunity to build anew an earthquake-resilient Nepal.

The same devastation also brought key political parties together to sign a 16-point deal that paved the way for the promulgation of the long-delayed constitution. They promised to fast-track constitution process and form an all-party government to mobilize their full strength on post-quake reconstruction. Political parties indeed mobilized their rank and files in relief distribution and early recovery. The government also announced various schemes including housing reconstruction grants and subsidized bank loans for quake victims to help them rebuild houses.

Apart from its financial support in early recovery, the Sushil Koirala government announced Rs 200,000 to each household rendered homeless and a maximum of Rs 2.5 million subsidized bank loan. This announcement, coupled with international community’s pledge to support rebuilding, and the involvement of local volunteers and civil society organizations, had kindled hope among eight million people displaced by the disaster.

But this great hope was shattered when parties started wrangling over whom to appoint CEO of National Reconstruction Authority (NRA) and who should lead the government post-constitution promulgation. The parties had agreed to form a national unity government while signing the 16-point agreement. Nepali Congress (NC), which was leading the government at the time, was supposed to hand over the reins to CPN-UML, as per the ‘gentleman’s agreement’. However, the largest party in the parliament refused to do so. Instead, it fielded party President Sushil Koirala against UML chief KP Sharma Oli in the parliament’s prime ministerial election.

This wrangling largely overshadowed post-quake reconstruction. The Congress-led government had appointed Govinda Raj Pokharel, through an ordinance, as the head of NRA just before the international conference on Nepal’s reconstruction. The UML refused to endorse Pokharel. It wanted its loyalist heading the NRA.

When KP Oli came to power, he appointed engineer Sushil Gyewali as Chief Executive Officer of NRA at the end of December 2015. It took months for the new CEO to establish a three-tier organizational set up. Government employees close to Congress party refused to join the authority.

They questioned CEO Gyewali’s competence, arguing that he was unqualified for the high-profile position and that he wouldn’t be able to handle the difficult task. Since Congress-led government itself had agreed with donors to distribute housing reconstruction grants only after detailed damage assessment, NRA was not in a position to distribute grants to quake victims immediately after Gyewali took charge of office, forcing millions of quake victims to continue to put up in makeshift tents. So what went wrong?

Populist posturing
When Congress was defeated in the prime ministerial election and was pushed to the opposition bench, it started to blame Oli government for slow progress in reconstruction. The party obstructed the parliament for days, demanding that Rs 150,000 be provided to quake survivors in the first installment. It was against the agreement the Congress government had signed with donors, to the effect that Rs 50,000 would be provided to each certified victim in the first installment and remaining grant would be provided based on progress in housing reconstruction.

Congress stopped obstructing the House after Oli government agreed to distribute the grant as per Congress demand. The Maoist and Congress together even registered a no-confidence motion against Oli, blaming him of failing to expedite post-quake reconstruction.

But even the new coalition of Congress and Maoist Center have failed to provide the first installment of Rs 50,000 to the victims, let alone fulfill their promise of providing a lump sum of Rs 150,000, as they had promised.

Prime Minister Pushpa Kamal Dahal is announcing one after another scheme for quake victims. He promised to raise reconstruction grant to Rs 300,000 from Rs 200,000, while it is clear that Dahal himself will have to make way for Congress President Sher Bahadur Deuba in about six months.

The fresh pledge puts additional burden on the authority which already lacks adequate funds. In view of the three sets of elections that are scheduled for the next 16 months, parties are making populist announcements to woo their vote banks. It won’t be a surprise if the government announces more unrealistic packages in days to come. All this is likely to ultimately push Nepal on to the failed Haitian path.

Though international donors had pledged US $4.1 billion for rebuilding Nepal little has been done to bring the committed aid to government treasury. The government has signed agreements with bilateral donors worth $1.92 billion so far.

Fading hope
The victims have no hope of accessing grants any time soon. Therefore more than 31,000 people have already rebuilt houses on their own. NRA is still struggling to distribute first installment of grants one and a half years after the devastating quakes and detailed damage assessment of Kathmandu Valley is yet to be completed.

Over 800,000 households have been identified as earthquake victims and thousands of complaints have been registered with local authorities demanding their recognition as quake victims. PM Dahal had assured to enlist more victims as beneficiaries.

Dirty politics in reconstruction has not only pushed victims to an uncertain future but also raised a big question mark over the transparency of donor-assisted reconstruction.

KATHMANDU, Jan 19: January 16 marked the completion of three years since a foundation stone for the reconstruction of famous... Read More...

The 24th day of April 2015 was just another Friday for Bishnu Tamang, a sixth grade student in Shree Nawalpur... Read More...

Courts across the country to remain closed today
57 minutes ago