Real Madrid could do with some improvement despite victory 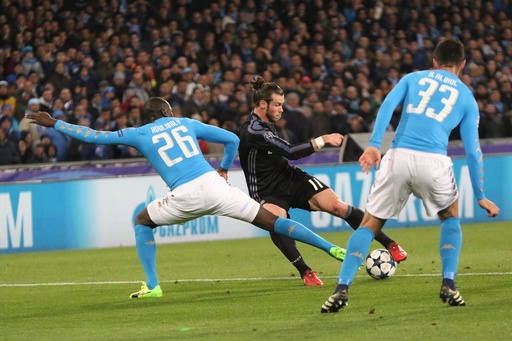 NAPLES, March 8: Even after reaching the Champions League quarterfinals for the seventh straight season, Real Madrid could do with a little improvement.

Madrid advanced, beating Napoli 6-2 on aggregate, but it didn't look easy and it wasn't that pretty.

With a 3-1 advantage from the first leg, Tuesday's return match was supposed to be a simple task. But the defending champions found themselves pinned back in their own half by Napoli, which dominated for almost an hour.

"We're capable of doing better than we did in the first half and we'll have to do so," Madrid coach Zinedine Zidane said. "Coming here and being put under the pressure that they put us under, we knew that we might struggle.

"We can't be happy with the first-half display, but have to be pleased with our second-half performance."

Madrid again turned to captain Sergio Ramos to dig the team out of a hole.

Napoli was starting to believe it could advance after Mertens, who also hit the post, scored in the 24th minute, but Ramos has proved many times that he is the man for the big occasion. The Spain defender headed in the equalizer six minutes after the interval and another header, six minutes later, was deflected in by Mertens.

"We're pleased to have Sergio here, every now and then he comes up with a goal with his head," Zidane said with a smile.

It was Ramos who headed home deep in stoppage time in the Champions League final in 2014 to save his team. Madrid went on to win 4-1 in extra time, clinching "La Decima" — its record 10th title and its first in 12 years.

Ramos was also on hand in the final two years later to set Madrid on its way to an 11th European Cup title.

"Last week they were slating me, a month ago I was fantastic, and just because I've scored a couple of goals tonight, it doesn't mean I'm going to be a hero again," Ramos said. "We try and do our job the best we can and today, despite a poor first half, we've shown we can dig in together."

Madrid's famous front three — the "BBC" of Karim Benzema, Gareth Bale and Cristiano Ronaldo — were largely anonymous, although the latter also hit the post in the first half.

"Gareth helped Dani in the defensive aspects, as did Cristiano," Zidane said. "It's all about the whole team. We didn't start well in the first half, we did a good job in the second. We're a group and Gareth and Cristiano helped us a lot."

Madrid now has almost a month before the first leg of the quarterfinals and can focus on the Spanish league. The team won only three of its five matches between the two last-16 legs, although it is only a point behind league leader Barcelona and has a game in hand.

"We'll have to reflect on the mistakes we made and now we turn our attentions back to La Liga," Ramos said. "They (Napoli) dominated for nearly the entire first half. We really suffered. We'll take time now to think about things calmly."

Perez to remain as Real Madrid president until 2021

Florentino Perez will stay on as Real Madrid president until 2021 after no other candidates presented a bid to rival... Read More...

Police arrest a man on charge of defrauding people in the name of securing US visa
23 hours ago
Two edible oil producers slapped cash fine of Rs 300,000 each for charging exorbitantly high prices for their products
11 hours ago