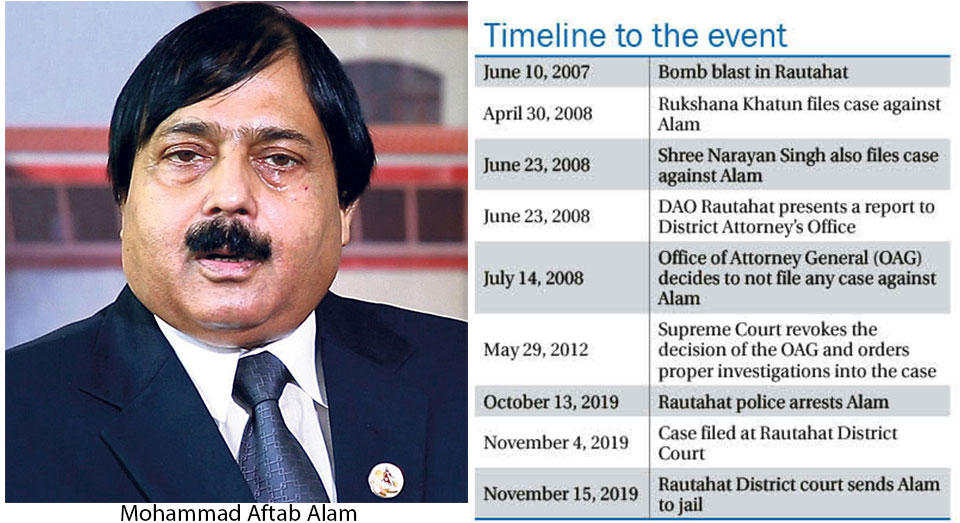 'No blast occurred in 2008 and I have been framed out of political bias'
RAUTAHAT, Nov 16: Rautahat District Court on Friday sent Nepali Congress leader Mohammad Aftab Alam, who has been accused of a bomb blast and multiple murders, into judicial custody.

After conducting preliminary hearings over his involvement in a 12-year-old case, a single bench of District Judge Deepak Dhakal sent Alam into custody pending a final verdict. Alam has been sent to Gaur Jail.

The court conducted preliminary hearings from November 7, and 31 lawyers pleaded on behalf of Alam. During the hearings, public attorneys termed the case a crime against humanity and demanded a jail sentence .

Alam's lawyers, however, asked for his release, saying that Alam was framed to weaken his political influence in the district. But blast survivors and the kin of the victims rejected this and affirmed that the blast had indeed occurred and insisted that Alam must face justice.

The District Attorney Office (DAO), Rautahat filed the case at the district court on November 4, with three charges against Alam– murder, use of explosives and causing a bomb blast. He was arrested on October 13.

Following the court decision, Alam said no blast occurred in 2008 and he has not even set off a firecracker to date. “I have won elections several times. I don't need to use explosives to win elections,” he said, adding that he was innocent and had been framed for reasons of political bias.

Meanwhile, Shree Narayan Singh, father of Trilok Pratab Singh (Pintu) who died in the blast , said he has found justice after 12 years. “Now, I will go to Gaya ( India) for the last rites of my son,” he said with tears in his eyes.

The blast, which occurred at a cowshed on the premises of a relative of Alam's when the victims were making bombs, allegedly left 14 dead and eight injured. Alam has been accused of taking those injured in the blast and the bodies of those killed to a nearby brick kiln and throwing them into the furnace to destroy any evidence of the incident.

It later emerged that all those killed were making bombs to create terror during the first Constituent Assembly elections of 2008 in which Alam was a candidate.