Rather than blaming India, it is important to manage ourselves: Deep Kumar Upadhyay 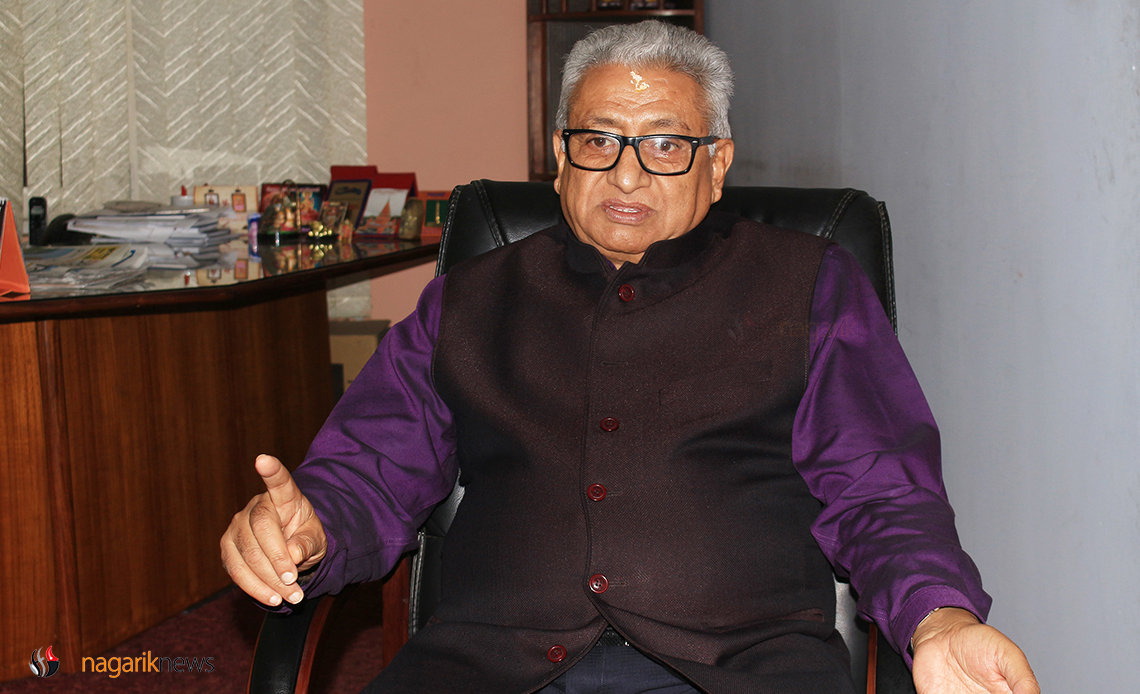 For the second time, you served as the ambassador to India. However, you returned before your tenure?

This is a well known issue. With efforts from former Prime Minister Sushil Koirala and President Dr Ram Baran Yadav, I took on the ambassadorship as a special assignment to ease Indo-Nepal relation. By my ethical and moral stands, I resigned from the party and went to serve my country as an independent citizen.  I had explained that it would be for limited time.

In this duration, there have been various incidents. Diplomacy is not my expertise but I served my tenure from the experiences and knowledge of my four decades of political career.

After I returned, Pushpa Kamal Dahal and party chairman Sher Bahadur Deuba urged me to continue for the second time. Both the times, I requested saying that this was not my area and it was only for a short while. But, I worked honestly.

Kapilvastu, the place where I was born, grew and which shaped my identity is a holy place. The place is important for the nation as well as the world. It is home to three of the four ‘Manas’ Budhha and the residents of the districts have done me immense good. They would often question why I continued to serve as an ambassador, even after Indo-Nepal ties became stable. They’d question if I’d come amidst them or if I was used to an easy lifestyle. These questions wrenched my heart. It was then that I decided and informed my leaders that I’d return.

If I had returned earlier, the embassy would have had another ambassador as well. However, it has been procrastinated. In diplomacy, everything doesn’t happen immediately. Even after returning, leaders continue to opine that I still should have been there. I had to make special requests to make my resignation accepted.

Didn’t you betray the state’s trust?

This is not even the case. We have competent leadership and staff at our Ministry of Foreign Affairs. We must trust them. Indo-Nepal relations have eased now. For newly elected government, favorable environment has been created with India to push our country toward economic prosperity and build sustainable peace and political stability. I’ve said to leaders of the Ministry of Foreign Affairs that even if the embassy is without an ambassador, no uncomfortable situation would come between two countries. Now, there’s an environment of trust. I’ve especially mentioned that there won’t be a situation where people would suffer.

Are you returning to active politics?

In my past position, I had to be cautious of what I’d speak. Now, I am free and it is through medium like yours that I will share my thoughts, experiences and knowledge to reach the public. I think Nepal’s political scenario has further deteriorated in the past three years and this is wrong. Politics is based on commitment. It is not business where we look into immediate profit or loss. In times like this, we should come into national politics and serve as much as possible toward district’s politics. Once again, I’ve come to Nepal to openly put forward debates.

So you will contest the elections?

It is for the party to identify areas where I can contribute better. With candidacy, I will accept what the party decides.

However, I’m sad to see that people are threatening to join another party in case they are not given tickets. Political life is difficult. It is like a walk on the sword’s blade. I’ve left it for the party to decide on my candidacy. I don’t want to pile any pressure either. I saw excitement from Kapilvastu’s party cadres but even then, I didn’t use it as a tool to pile pressure.

It is said that Nepal’s politics is seen much clearer from Delhi.

Meeting with respected political figures is easier in Delhi than here because of frequent travels for treatment and personal work. There’s so much similarity in terms of culture, religion, work, relationship and kinship due to open border. It is easier to get updated on day to day activities as well.

It is said that you were called by the government for doing politics under the garb of diplomacy?

These are all absurd. Even then, with utmost respect, I had said that if proven guilty, I’d give up politics. This has ceased now. Let us not divert. I have good relationship with leaders of all political parties. I and KP Oli are close acquaintances. I received huge media mileage following the incident.  I then called him (KP Oli) and thanked him, he laughed. We seldom get covered in frontline news. Indian media has covered my news of both arrival and departure with special interest. It was just an incident.

When the constitution was promulgated, there were different obstacles, all of which have now ceased. Now, all parties have readied for upcoming elections and I find this gratifying.

We need to hold our heads held high and move ahead with the spirit of solving our problems ourselves.

Nepali parties didn’t back down on its position and India overstepped with reservations. It was not only India, but other friendly nations that had their reservations, too. Why do we blame only one nation? It would have been good if all had gone together.  They were neither prescriptive nor reserved. We should have done it ourselves.

There were some prescriptions once in a while though.

We’ve seen through negativity. If we are to argue that India intervened in decisions that we made, I have nothing to say. How can we say that our ministers lip-singed India’s commitments and promises? We forget our commitments and works and blame others. I have always said that such activities are neither justifiable nor relevant. It is important that we frame our foreign and security policies. We can’t be mismanaged ourselves and blame others.

We need to be self managed before blaming India?

Absolutely. We need to be responsible and managed. Since we could do neither, we had to face blockade. Politics is full of ups and downs, but it shouldn’t mean that citizens suffer.

Just like when the revised constitution was passed despite common understanding that it wouldn’t?

For one thing, there was satisfaction in the process. Following the constitution, political parties who had not participated in elections started to participate. Powerful nations might have their interests. Why do we go there? Let us not doubt in all. Let us trust our society, constitution and be responsible toward it. We won’t reach anywhere if we start the blame game.

How is Indo-Nepal relation now?

Relationship neither forms nor breaks in a day. There have been frequent high level visits in Nepal. Friends at the Ministry of Foreign Affairs have shared good things. Even there, blames are likely to surface.

What about PM Modi’s visit to Nepal?

Preparations were made to inaugurate Arun III, a ready-to-go project. It can be inaugurated electronically or by PM Modi coming here itself. Due to upcoming elections, the visit has been delayed for the time being.

Nepal will enter into new politics. How do you see the scenario?

I am extremely optimistic. Development activities will gain momentum after local elections and provinces will take its leadership. We can’t always blame administration. This will be Nepal’s first exercise and we must be extremely responsible.

How do you see the post-election scenario and left alliance?

This is leftist ideology. They will use party’s superiority, which we are against. We wish for citizen’s supremacy. We exercise our rights through elections. They think that people should cast them votes while we respect people’s choice.  Citizens are free and have rights to frame their identity and ideology. Globally, communism fell weaker in the hands of informed citizens. This, we’ve not been able to explain, and as a result, it is increasing here.  This is an opportunity for us – opportunity to explain citizens. The election will show how strong the Alliance will be and it would be too early to predict post election scenario.