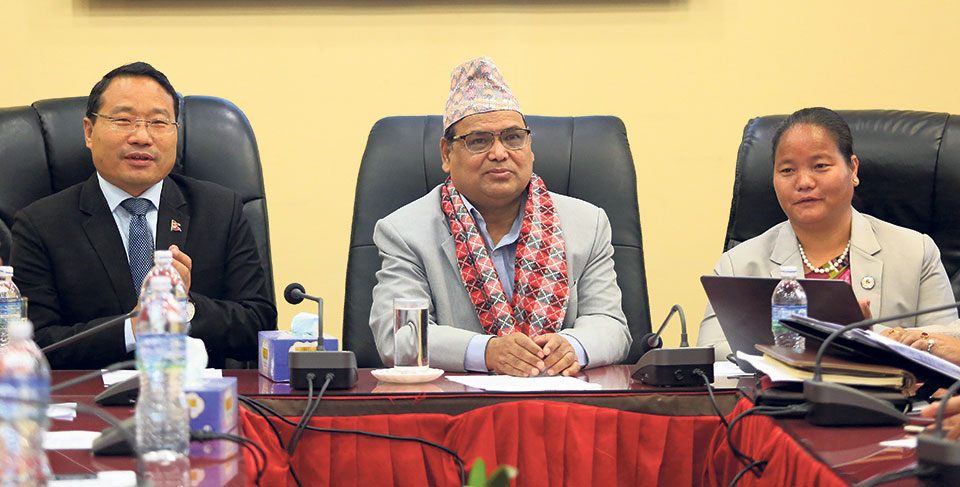 From left, Minister for Energy, Water Resources and Irrigation Barshaman Pun, Speaker of House of Representative of the Federal Parliament Krishna Bahadur Mahara, and former speaker Onsari Gharti, listen to questions at an event marking the start of the application process for the floating of primary shares of Rasuwagadhi Hydropower Company Ltd and Sanjen Jalavidhyut Company Ltd held in Singha Durbar, Kathmandu, on Friday.

The primary shares of these two state-owned companies are up for sale for the public from Friday.
While RHCL has floated 10.26 million units of shares worth Rs 1.026 billion, the public can subscribe SJCL’s shares worth Rs 547.5 million.

Each of the shares of these two companies has been priced at Rs 100. The deadline for subscribing has been set for upcoming Tuesday.

As these companies will later float shares to locals of project-hit Rasuwa, the company has said that they will be ineligible for applying shares allocated for the public. Currently, dematerialized account is a must for any investor to apply for primary shares of any public company.

Both of these companies are promoted by Chilime Hydropower Company Ltd and Nepal Electricity Authority (NEA). Chilime itself is a hydropower company where NEA holds majority stakes with 51 percent of shareholding.

SJCL has been constructing two hydropower projects of aggregate capacity of 57.3 MW. Chilime Hydropower Company Ltd owns 39.26 percent stake in SJCL while Nepal Electricity Authority has 10.36 percent shares in the company. Local level governments have 1.28 percent ownership in the company.

Similarly, RHCL is developing 111-MW Rasuwagadhi hydroelectric project.
The share of these companies can be applied from member bank and financial institutions (BFIs) who are members of C-ASBA or through meroshare.com.

However, none of these offerings have received not-so-good ratings from a rating agency, ICRA Nepal. The agency has assigned both companies ‘[ICRANP] IPO Grade 4+’, indicating below-average fundamentals of the proposed public offerings.

With the new rule recently introduced by the Securities Board of Nepal (Sebon), investors can now apply a minimum of 10 units of shares. Earlier on April 10, the Sebon has lowered the minimum limit for applying shares to 10 units from 50 units with an aim to ‘increase the access of those groups who have less capital like students and housewives in the capital market’.

Maximum limit for applying shares of SJCL is 2,000 units while investors can subscribe up to 5,000 units of shares of RHCL.

Rasuwagadhi customs to be equipped with walk-through gate, X-Ray machine

RASUWA, Aug 1: Rasuwagadhi Customs Office is preparing to install a passenger walk-through gate and a luggage X-Ray machine at the... Read More...

RASUWA, July 9: The Syafrubesi-Rasuwagadhi road section of the Galchhi-Trishuli-Rasuwagadhi highway has been obstructed due to the landslide triggered by... Read More...